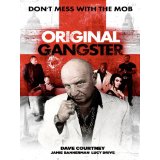 “The meek shall inherit the Earth when the strong say so.”

Director Manish Patel wants his now. He is mostly known as a British television documentary guy, and it’s only natural that he’d eventually want to try his hand at a feature film. If you can’t find the right project, there’s always writing your own. Patel ends up being one of those one-man bands with a low budget and a minimal crew. The result is Original Gangster, known as Full English Breakfast in his home territory of England.

The change of name for US audiences is a bit of a puzzler, and the box copy is some of the most misleading text I’ve ever seen. It promises that we’ll see the rise of this gangster to form an empire, but we see absolutely none of it. Worse, it offers us an enticing gangster vs. Al Qaeda monster mash-up and never delivers on that either. If there were any terrorists in the film, I think they were behind the camera. Sure, there’s a really bad torture scene or two that attempts to cash in on the whole waterboarding controversy. But the only real act of terrorism here is forcing us to spend nearly two hours watching Original Gangster.

Jamie (Sullivan) is a down on his luck ex-soldier who has just escaped the fighting in Afghanistan. His luck changes when he finds a wallet on the street behind a cafe. The wallet belongs to one Dave Bishop (Courtney), and after taking a ten-spot to have himself a full English breakfast (eggs, bacon, sausage, baked beans, mushrooms and toast), he sets out to return the wallet and the rest of the cash.

Dave Bishop is in the middle of dealing with his driver Ahmed (Kahn), whom he suspects of ripping him off. Jamie comes just as there’s about to be a job opening for a driver in Bishop’s organization. After taking Ahmed in the back for a round of golf Dave Bishop style, Jamie is offered the job, being told Ahmed is wrapped up in something else, which just so happens to be a plastic drop cloth. You see, Bishop doesn’t like it when people steal from him; that includes his trophy wife Sue (Drive), and that’s going to be a bit of a problem for new hire Jamie.

Bishop is a drug dealer, and Jamie is shown the ropes of his new job. Enter the over-long music montage and knowing glances from the supporting cast. As if working out on Bishop’s wife isn’t enough trouble, he’s captured and “tortured” by Habib (Singh) who wants to know what happened to his brother; you know, Bishop’s earlier golf partner. After he holds up to a lame waterboarding consisting of a towel and a small bottled water, Habib is convinced he’s telling the truth, because no one could stand up to that torture and keep telling lies. If that’s true, I can imagine what being forced to watch this movie Clockwork Orange-style might have produced. (Don’t give anyone any ideas.) They plot the demise of poor Bishop and a hopeful happy ending for Jamie and Sue.

Are you still awake? After several bottles of No-Doz, I finally got through this one. OK, first of all I understand this is a low-budget film with limited resources. But couldn’t they hire one guy to make sure the camera lens was clean? I mean, really. At first I thought there was a bug on my monitor, but it was an extremely annoying smudge from the camera. There’s a scene where a couple of frames of digital transition break-up is left in the film. It’s not like they were using real film and had to use every inch they shot. Are flash cards that expensive in England?

Patel has a limited budget, and he should have embraced that situation and settled for good storytelling. That kind of stuff transcends any budget. Instead he opts for unnecessary camera tricks to hide his budget limitations. I’m talking about things like sudden speeding or slowing of the frame-rate. The torture scenes take place under a nasty blue light or some crazy color correction. The people look like cadavers that have been on ice a few days. Patel is reaching in almost everything he does here. He needs to learn to trust the performances and/or the script.

About the only redeeming factor in the entire film is the performance of Dave Courtney as Dave Bishop. He’s a force of nature and could have really been spectacular given half a chance. Still, he manages to salvage some of the film, even if it’s painful to watch pretty much every actor around him. Credit Courtney for looking like he doesn’t notice what a mess he’s in and playing his role faithfully throughout.

There is a behind-the-scenes feature that runs about 20 minutes and another five-minute feature that contains the quotes from Dave Powers’ tell-all book. Did I fail to mention that one? OK, maybe I nodded off for a second or two.

It’s clear that Patel is in over his head here. He wasn’t quite ready for this, and the best thing that could happen for him is to return to his comfort zone and learn a little bit more. You have to walk before you can run, and Patel is still learning to crawl. He did teach me what a full English breakfast was, and now I’ll try my best to forget. There. You are fully warned, so if you happen to pick up Original Gangster anyway… “You know exactly what you’re getting into.”

Gino Sassani is a member of the Southeastern Film Critic's Association (SEFCA). He is a film and television critic based in Tampa, Florida. He's also the Senior Editor here at Upcomingdiscs. Gino started reviewing films in the early 1990's as a segment of his local television show Focus. He's an award-winning recording artist for Omega Records. Gino is currently working on his 8th album Merchants & Mercenaries. Gino took over Upcomingdiscs Dec 1, 2008. He works out of a home theater he calls The Reel World. Favorite films: The Godfather, The Godfather Part II, The Body Snatcher (Val Lewton film with Karloff and Lugosi, not the pod people film), Unforgiven, Gladiator, The Lion King, Jaws, Son Of Frankenstein, The Good, The Bad And The Ugly, and Monsters, Inc.
Kissing Jessica Stein (Blu-ray) Perry Mason Movie Collection Volume 1