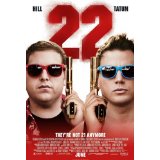 When I see films I don’t like, I tend to dismiss them. I have seen many, many movies over the years, and I have seen many, many terrible movies. In the last few years, there have been an increasing number of post-modern, self-referential meta-movies full of smarmy irony. So many of these films have been made that it seems that I don’t see simple un-ironic movies that are just plain funny anymore. It is actually a great skill to create something really funny. 22 Jump Street is supposed to be a stupid comedy that one can enjoy without thinking. First of all, I sat through the whole movie and didn’t laugh once. That doesn’t mean that most people won’t laugh at this movie. But I’m angry. After I saw the movie I saw that lots of critics gave it favorable ratings. I’m angry because the standards of critical thinking are collapsing. I think it’s hard for many to appreciate real humor, but I can guarantee there is no real humor in 22 Jump Street.

There are so many things I didn’t like about this movie, so let me start with some of the things I did like. There was a female roommate who had a biting, sarcastic tongue and caustic manner. That was about it.

I’m not a fan of the two leads. Jonah Hill has gotten attention lately for losing too much weight from his portly appearance, causing people to ask him to gain it back. I don’t find him funny either way. Channing Tatum is his co-star and is not known for comedy. He reprises his himbo dumb jock from the first film. I didn’t find it funny either time. I’ve heard some critic refer to them as a modern day Laurel and Hardy. This makes me want to reevaluate that classic comedy team as being pathetic hacks.

The movie makes a great show of constantly showing how stupid everything they are doing is. It got old really quick. I don’t see that as meta. I see it as lazy. It is a simple cover-up for not writing a decent or original story in the first place. It also allows for the film to make constant leaps in logic. One of the most glaring was when Jonah Hill meets an attractive young woman and sleeps with her. It turns out she is the daughter of Ice Cube. When Ice Cube finds out at a fancy buffet, he starts throwing food all around the restaurant. It made so little sense in so many ways, I literally glowered at the screen. There has to be a sense of logic and fun. But the whole concept of the movie is that everyone is so unprofessional and incompetent that anything goes.

I should say that I’m not really upset with the movie as much as the stupidity of the majority of critics that give something stupid the sheen of wit and genius. I think most critics probably think it’s mildly entertaining and somewhat fun. I probably fall in that camp, but I am definitely giving this thumbs-down so as not to encourage more garbage like this. One of the good things about the film is that the writers and directors know that the idea of this kind of movie is everything that is wrong with Hollywood, and they have their cake and eat it too. They make subversive fun of the all the movies that are just like the dumb movie they made. I’m sorry, but that’s not good enough. I’m drawing a line for all the trolls to come out and do what they do best. Tear this movie down and stomp its guts out. Do not encourage junk.

I will give a thumbs-up to Kurt Russell’s son, Wyatt, who does a nice job as rival best bud and bromance partner for Channing. They should get their own movie. At least I won’t have to look at Jonah Hill’s offensive mug anymore.