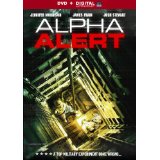 Telling a story that takes place in one location isn’t the easiest thing to do. Films like Clerks, 12 Angry Men, and Saw show that it is possible to do, as long as you have the writing and direction to pull it off. Alpha Alert was able to do just that, even though it still had its ups and its downs. When a terrorist attack hits the streets of D.C., Cpt. White (Jennifer Morrison), Pfc. Diego (Stephen Rider), and Sgt. Oldsman (Josh Stewart) become trapped as an innocent elevator ride now becomes an escape mission. Each of them, struggling with PTSD, will have to deal with one another and their own illness as they run out of time and slowly realize that not everything is as it seems.

The premise of putting three people in an elevator and putting them under extreme stress until one or all of them cracks makes for a pretty interesting story. Pair the story with a few actors who can portray these characters believably, and you get yourself a fairly decent film. Alpha Alert is just that. It’s a decent film that is able to tell a decent story. It was entertaining and able to keep my interest, but it did have its flaws.

The film’s attempt at foreshadowing ruins the whole film. The three soldiers all start off in their own therapy sessions, discussing the context as to how they got their PTSD, which is fine for character development, but it plays out more like when a romantic comedy shows you the two main love interests and their different points of view, and then builds up to when they bump into one another.  They all spill out into the hallway from their different rooms and walk towards the elevator. This is where the film starts to get predictable. Normally, your psychiatrist doesn’t stand there with his colleagues and watch you huddle into an elevator after your appointment. It all just gives away too much as to what’s going to happen.

The second example of bad foreshadowing is when they introduce Sgt. Oldsman.  In my personal opinion, I like to learn to hate characters gradually through a film, but Alpha Alert shoves it in right your face right from the beginning of the film that Sgt. Oldsman is a terrible person and that you should hate him, with his condescending attitude and his ideals that women shouldn’t be allowed to fight on the front lines of war. You just know from the start that this guy is going to be trouble, and to no surprise, he is.

The end of the film also bugged me quite a bit. Even though everything seems to be resolved in the end, it just feels very weak. Without spoiling too much of the film, you see one of the soldiers leave the elevator, and go out and to put an end to what’s actually been happening. It just feels like an empty ending, and the most we get to a real conclusion is a short scene that looks like it was shot on Super-8. It’s not a bad ending, because it shows a happy ending, but it definitely isn’t the ending this film deserves.

The only major problem I had with the film was its rating. Alpha Alert is an R-rated film, which is fine, but it seems as though the director and writer pushed for this. The film has blood every now and then, but I’ve seen tons of PG-13 films with blood. What gets this film its rating is its overuse of the F-bomb. They could have easily refrained from using it, and the only excuse I can think of for using it would be to make the dialog seem a little bit more genuine and real. The weird thing about it is that only the F-bomb is used; if they pushed so hard for it, why not use more than one curse word? In the end it doesn’t hinder or help the film, it just feels really unneeded.

The one thing the film did really well in my opinion was the camera work. The whole film takes place in an elevator, an elevator that just so happens to have walls made entirely out of mirrors. Now, I know this isn’t a major feat to accomplish, and yes, I am well aware of two-way mirrors, but the use of all of this was done pretty well. Near the end of the film, one of the mirrored walls is broken to reveal one of the cameras, which makes it feel as though not only do they realize that they have been watched this whole time. What adds to this for me, is that most of the film seems to be through the eyes of security cameras and tapes, which when that mirror gets broken, it’s a kind of breaking of the fourth wall, quite literally.

Other than its problems with foreshadowing, the acting was good, the camera work was good, and the script seemed to be fairly well written. I quite enjoyed it, as it was able to keep my attention and I am a sucker for twists. As I said, even though it has its flaws, Alpha Alert is worth a watch.