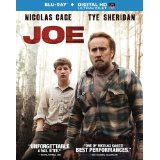 I hope everyone had a fantastic Father’s Day! I’ve actually been lucky enough to have two strong paternal figures in my life (my dad and stepdad), which is much more than I can say for the young protagonist in Joe. The latest Southern Gothic drama from director David Gordon Green — adapted from the Larry Brown novel of the same name — features one of the very worst dads you’ll ever see. To balance things out, the title character is one of the unlikeliest father figures in recent memory.

The movie’s opening scene drops us right into the toxic relationship between 15-year-old Gary (Tye Sheridan) and his no-good alcoholic father Wade (Gary Poulter). Gary has been forced to become the provider for his family, which also includes his mom and sister. He goes looking for a job with a crew of workers tasked with deadening trees. (Poisoning weak trees so they die and can be cut down.) The crew is run by Joe (Nicolas Cage), a personable, authoritative ex-convict. Gary convinces Joe to give him a job, and the teenager proves to be a relentlessly hard worker. The same can’t be said for Wade, and Joe gets a first-hand look at the abusive relationship between father and son. As Joe’s bond with Gary continues to grow, the ex-convict — who struggles with his violent nature on a moment-by-moment basis — finds it increasingly difficult to resist getting involved in the young man’s family drama.

It’s a relatively simple, yet compelling story that Green tells in the style of his naturalistic, improvisational dramas like All the Real Girls and (most recently) Prince Avalanche. By design, Joe doesn’t appear to have a specific setting. This story looks as if it could be taking place in any depressed Southern town at any point in the last 25 years. Cinematographer Tim Orr’s camera constantly trails behind its three sad-sack main characters as various people (and various threats) float in and out of their lives. In the same day, we watch Joe visit a brothel guarded by an unfriendly dog and take the time to teach some acquaintances how to properly skin a deer. We also see him have several run-ins with Willie-Russell (Ronnie Gene Blevins, memorably unhinged), the dangerous man Joe previously humiliated in a bar. Willie-Russell eventually crosses path with Gary, who proves he’s able to take care of himself.

Green’s style, however, tends to meander (or flat-out leaves you scratching your head). Sometimes the meandering works, as it does in the sequences with Joe and his work crew (highlighted by Brian D. Mays live-wire performance as second-in-command Junior). Other times, the result is as soggy as the torrential downpour that dampens the forest early on. I’m thinking of the scenes between Joe and Connie, the kind, troubled young woman who co-habitates with Joe for a while. Their moments together are well-acted and hint at the fractured family that seems to be out of Joe’s grasp, but their connection ultimately feels underdeveloped and unsatisfying.

Thankfully, the same can’t be said for the connection between Joe and Gary. These scenes have a focus and specificity that nicely complement the looser style of the rest of the film. The best of the bunch is a sequence where Joe doles out helpful, not-quite-fatherly advice. (Like how to avoid being pulled over by the cops, or telling Gary about the sound that gets hookers excited) The most amusing bit has Joe teaching Gary how make a “Cool Face” because it may or may not double as a peek at Cage’s own acting process.

In recent years, Cage has looked increasingly disengaged from the substandard, straight-to-DVD material he’s been appearing in. But here, he gives the sort of performance that reminds us why we can never completely count him out as an actor. This may be a micro-budget indie, but it’s Cage’s movie-star magnetism that carries the day. As Joe, he sports a bushy beard that does little to distract from his soulful, hangdog eyes. His performance hints at a deep inner turmoil while remaining charming enough to make it believable that Joe is on a first-name basis with everyone in town.

Cage is at his best here when he’s on screen with Sheridan. The actor — who broke out with his role in Mud, another coming-of-age Southern drama where his character befriends a charismatic man with a checkered past — is good at playing a kid who is forced to conduct himself as an adult. (Reliable, accountable.) Sheridan also offers enough glimpses to remind us that Gary is still a kid, like the lighthearted scene where Wade pops and locks for his son. Speaking of Wade, Poulter’s performance as the pitiful, monstrous father is a heartbreaking revelation. Poulter was a homeless performer in Austin who had never acted in a movie before when Green cast him. He died shortly after filming was completed, but his debut left a searing, indelible mark.

As we learn more about Joe’s hard-luck, violent past — and glimpse more of Gary’s increasingly hard-luck, violent present — the film hurtles toward an inevitably violent conclusion. The bloody finale is effective, even if it comes up with somewhat of a pat resolution for its main conflict. That’s why I was thankful for a coda that stylistically and thematically ties together perfectly with the film’s opening scene.

Joe is presented in an aspect ratio of 2.40:1. The 1080p image is arrived at with an AVC MPEG-4 codec at an average of 30 mbps. The prevalent look of the film manages to be both luminous and shabby. It’s an odd combination that works because color and contrast are spot on, helping bring Green’s dreamy, down-home vision to life. This is a clean, artifact-free image that’s most impressive whenever it ventures outdoors. (Panoramic shots are particularly eye-catching.) Some interior scenes also impress, especially when Green and his cinematographer play with some color filters. (The color red stands out in an early scene.) Unfortunately, black levels are a bit murky and never quite as inky as they appear for the film’s fetching title graphic at the beginning. The relative lack of shadow definition does become a bit of an issue during the film’s climax, but this is overall quite a strong, often-striking presentation.

The DTS-HD Master Audio 5.1 track is not unlike its title character: a quiet storm that could explode at any moment. Green often allows for dialogue-free stretches in his films, and this is no exception. The action is carried by an active surround sound field that immerses you in its Southern Gothic setting, particularly during any scene where Joe and Co. are working in the forest. David Wingo and Jeff McIlwain’s score gets a throbbing boost from the subs to help convey a character’s agitated state of mind. Dialogue is a bit muddled at times, though I suspect that has more to do with the characters’ mumbled diction (especially Wade and Junior) than any technical deficiencies.

Commentary with director David Gordon Green, composer David Wingo, and actor Brian D. Mays: Green chose two collaborators for this track who would help him cover the technical and thematic aspects of this production. The director is insightful and effortlessly drives the conversation, but he also generously cedes the spotlight to a guy like Mays, a former Vietnam vet who also made his acting debut in Joe. This worked out much better than when Green picked two random production assistants to join him on his Prince Avalanche commentary.

Making of Joe: (11:15) Green and Cage discuss the project and the film’s production. Cage refers to novelist Larry Brown as one of the greatest success stories of the American South, but the emphasis here is mostly on Joe‘s dark themes and Green’s highly-collaborative filmmaking method.

The Long Gravel Drive: The Origins of Joe: (15:55) Never fear, book fans: Brown and his novel get more than their proper due here. Screenwriter Gary Hawkins (who was also Green’s college professor) talks about the process of adapting Brown’s novel to the screen, as well as working on the 2002 documentary The Rough South of Larry Brown. (Brown died in 2004.) I was most interested in how the adaptation process evolved throughout the film’s production. Hawkins made some changes to Brown’s novel — including the ending — but this mini-doc also covers some notable changes that Green made from Hawkins’ screenplay.

Deleted Scenes: (2:46) Two brief, totally expandable scenes that include Wade’s monologue about a black widow spider and an extended version of a meeting between Wade and Willie-Russell. There is no Play All option.

Joe is touted as the “return of Nicolas Cage” to serious acting after becoming a caricature in recent years, and the actor certainly delivers his most focused and affecting work in years. (For what it’s worth, David Gordon Green’s next project, Manglehorn, stars Al Pacino and is also being touted as a return to serious acting for a performer who has become a caricature in recent years.)

Right now, Green seems to be specializing in presenting larger-than-life figures on a human scale. The Blu-ray offers another glimpse at Gordon’s process, which also happens to involve mixing movie stars with indelibly authentic real-life folks. Joe has its flaws and indulgences, but it remains a powerful character drama.