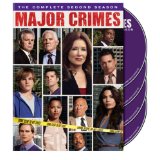 “Uncooperative witnesses are becoming a specialty of mine.”

That statement clearly describes Deputy Chief Brenda Johnson…except it doesn’t. Not anymore. The Closer was a stand-out hit for the folks at TNT. It’s no surprise that when the show’s star Kyra Sedgwick wanted to leave that the network would want to continue the show. That’s a little harder when the lead leaves. Shows have survived the loss of their lead, but the remaining years were usually something lesser than it once was. That’s not the case here. The title was changed, and with just a few cast tweaks the series returned as Major Crimes, and I dare say a much better show than its predecessor.

The focus of the show remains exactly the same. Each week the Major Crimes Unit solves particularly high-profile crimes. Of course, Brenda is gone as the Deputy Chief. That position falls to the show’s former Commander Taylor (Gossett). He is now the Deputy Chief and serves mostly in the role of budget bean counter and skeptic. Brenda’s position as leader of the team now falls to Captain Sharon Raydor, played by Independence Day’s Mary McDonnell. The character had appeared several times in The Closer as head of the Internal Affairs Unit. Once considered the enemy, she’s now in charge of the unit. These two split Brenda’s old job duties.

Pretty much the rest of The Closer’s cast remains intact. The senior officer on the team is Lt. Provenza (Bailey); he’s still partnered with Lt. Andy Flynn (Denison). It’s a good combination as both characters spend the season feeling the effects of age. Lt. Tao (Chan) is still one of the tech experts along with Buzz (Keene), who also serves as the videographer of the unit. Detective Sanchez (Cruz) is back along with medical examiner Dr. Morales (Del Arco). Newcomers to the unit include Kearran Giovanni as new Detective Amy Sykes and Nadine Velazquez as the unit’s new D.A., Emma Rios. She’s going to butt heads with the team a lot this season. She’s not quite in tune with the unit and comes off a bit cold at times. The standout character has to be Lt. Provenza, played by M*A*S*H’s G.W.Bailey. The character is actually a lot like that show’s Rizzo. Just pretend that he finally got out of the Army and got into law enforcement. He’s always complaining and getting into trouble, but he’s smart, and his instincts are often dead on.

The series continues to follow the same kinds of cases as before. There’s a popular swimming coach who is killed because he might have sexually assaulted his students. A gang drive-by may be something other than what it was meant to appear to be. The murder of a pro baseball scout links back to a small town kidnapping from many years before. The murder of the son of a Congressman leads to some sensitive questions. The death of a family-owned car lot patriarch reveals a complex range of relationships and circumstances.

The best episode of the season is a rather different kind of show. It’s an unusually light episode that features a group of television stars. They include Happy Days’s Marion Ross, Barney Miller’s Ron Glass, Tim Conway, Everybody Loves Raymond’s Doris Roberts and Paul Dooley. They play residents of a special apartment complex. It houses the crew from an old 70’s detective show who all have reason to kill the complex owner, the son of a fellow crewmate who got them all together. It’s one of those shows where the cops really don’t want to bust the bad guy.

The season does contain a season-long arc that operates among each week’s standalone story. In the previous season we met Rusty (Martin), a teen who had been on the street as a prostitute when he encountered serial killer Phillip Stroh. Captain Raydor has taken the boy in as a foster parent, which ends up causing conflicts with both his security and witness preparations. He is getting threatening letters, and the season ends in a two-part finale that resolves this ongoing story.

I have to say that I like the show better now. The cast appears to have wonderful chemistry, and it was really always an ensemble effort. Without the Brenda character I think everyone else appears more at ease. The show is more freely able to explore these relationships with characters we have known for a while but not like this. This is a rare thing in television. Spin-offs are usually not better than the parent show. If you liked The Closer, you’ll love Major Crimes.

There are 19 episodes on four discs. You also get a 25-minute feature on the characters, a look toward the third season and select deleted scenes. It’s the kind of show you can start without having seen the first season or The Closer. I had missed the first season myself. Sure, there was some catching up on the Rusty storyline, but the episodes are laid out so that it’s easy to get caught up. Of course, if you’ve missed season 1, why not just get both and “double your pleasure”.

Gino Sassani is a member of the Southeastern Film Critic's Association (SEFCA). He is a film and television critic based in Tampa, Florida. He's also the Senior Editor here at Upcomingdiscs. Gino started reviewing films in the early 1990's as a segment of his local television show Focus. He's an award-winning recording artist for Omega Records. Gino is currently working on his 8th album Merchants & Mercenaries. Gino took over Upcomingdiscs Dec 1, 2008. He works out of a home theater he calls The Reel World. Favorite films: The Godfather, The Godfather Part II, The Body Snatcher (Val Lewton film with Karloff and Lugosi, not the pod people film), Unforgiven, Gladiator, The Lion King, Jaws, Son Of Frankenstein, The Good, The Bad And The Ugly, and Monsters, Inc.
Joe (Blu-ray) Regular Show: Season 3