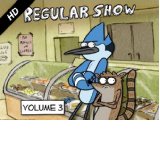 Of the cartoons that are on air, it’s no contest in choosing what is my favorite show. Regular Show just strikes a chord with me and reminds me of the antics of Ren and Stimpy back in the 90’s.  Sure, the show airs on Cartoon Network and kids could watch it, but the show seems more aimed at a teenage audience or at least the parents who are trying to find something to watch with their children.  Here at Upcoming Discs, when we get a series to review this usually entails a lot of binge-watching, because, well, to review a series we don’t just watch a few episodes, we watch it from start to finish whether it’s a show we have a good time with or one of the ones that have us struggling to keep our eyes open and our attention on the screen.  When it comes to Regular Show, it’s a show I have no problem clicking on that play-all button and just kick back and have fun watching whatever shenanigans Mordecai and Rigby get into.

Like with numerous releases from Cartoon Network, Regular Show has numerous DVDs with episodes from multiple seasons and thrown together in a DVD pack, so some episodes on the Season 3 release may be duplicates for some fans out there.  Thankfully, though, when making these combo packs, it never is simply heavy on one season in particular.

“Terror Tales of the Park” is not only one of the show’s darker episodes, but it happens to be one of my favorite episodes of the shows run.  It’s a Halloween episode and involves the gang telling stories to one another. Its Rigby’s tale of trick-or-treating gone wrong that makes it clear this isn’t for children who are easily spooked.  This episode just had me shocked considering we have one character that is decapitated as well as another that has their skin removed.  Sure, it’s cartoonish and whatnot, but still, for Cartoon Network I was a little shocked by how far they took this.  But with that being said, the episode was still pretty funny and one of the more imaginative ones at that.

As a show that enjoys paying homage to pop culture themes, “Weekend at Benson’s” follows that trend amusingly as Mordecai and Rigby carry around their boss Benson after they’ve knocked him unconscious but don’t want anyone to find out.  Yes this is loosely following the plotline of Weekend at Bernie’s, but the writers capture the spirit of the film and have a good time throwing the characters into some unique situations while maintaining its childrens’ rating.

Another of the more memorable episodes is “Eggscellent”, when the boys enter an eating tournament but Rigby is put in a coma leaving it up to Mordecai to train and win the competition for Rigby.  Sure, it’s a silly concept, but the show touches nicely on the bonds of friendship and how basically sometimes you just have to do some crazy things for the people you care about in life.  Heck, the training montage alone is worth checking out the episode.

One of the things that surprises me most about the show is the fact that the character Skips (basically a white gorilla-like monster that skips) is voiced by Mark Hamill, yes, that Mark Hamill.  His voice work ceases to amaze me, considering the man went from being Luke Skywalker to now in my head; he will always be the voice of the Joker.  But the fact that Hamill does work here gives the show even more cool points.  Just as cool, Carl Weathers lends his voice work as The Basketball King in “Slam Dunk”.

In the end this is a show that just has so much going for it. Between its clever dialog and goofy stories, what makes it seem to always connect with its audience is that the show isn’t afraid to show that it has a heart.  Whether it’s the budding romance between Mordecai and Margaret, or simply the bro-mance between Rigby and Mordecai, there are plenty of interactions here that kids watching will be able to translate into their real life.

Brent Lorentson is a horror writer and film critic based out of Tampa, Florida. With a BA in Digital Film, he co-wrote and co-directed Scavenger Hunt. His short stories have appeared in various horror anthologies. In 2019 his short script Fertile Blood will be a part of the anthology horror film Slumber Party. He is currently working on his first novel A Dark and Secret Place set to be released in late 2019. Favorite Films: Taxi Driver, Fight Club, I Saw the Devil, The Wild Bunch, Dawn of the Dead, A Clockwork Orange, Pulp Fiction, Heathers, The Monster Squad, and High Fidelity.
Major Crimes: Season 2 The Lego Movie: Everything is Awesome Edition (Blu-ray 3D)