The Lego Movie: Everything is Awesome Edition (Blu-ray 3D) 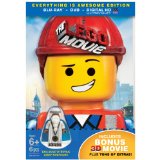 “You are the most talented, most interesting, and most extraordinary person in the universe. And you are capable of amazing things.”

There’s a worthwhile message in The LEGO Movie about the importance of deviating from life’s instruction book and indulging your imagination. But for me, the biggest thrill came from the way it became the first film without Toy Story in its title to tap into the anarchic (and anachronistic) spirit of playing with toys.

As with any self-respecting action/adventure, the story begins with a prophecy. The wizard Vitruvius (voice of Morgan Freeman) unsuccessfully tries to stop evil Lord Business (Will Ferrell) from acquiring an all-powerful weapon known as the “Kragle.” Before his defeat, Vitruvius declares that a Master Builder dubbed “the Special” will one day acquire the “Piece of Resistance” and neutralize the Kragle.

The story jumps forward eight and a half years, which is when we meet Emmet Brickowski (Chris Pratt), a good-natured, exceedingly ordinary construction worker in the city of Bricksburg. Emmet is thrilled to be a part of Lord President Business’s conformist, consumerist society where a cup of coffee costs $37 and everything is awesome. One night at Emmet’s construction site, he catches a glimpse of a rebellious young DJ woman named Wyldstyle (Elizabeth Banks). Emmet investigates and eventually stumbles onto the Piece of Resistance. Believing him to be the Special, Wyldstyle helps him escape the clutches of Bad Cop/Good Cop (Liam Neeson) and meet up with the LEGO world’s other Master Builders, including a scene-stealing, hilariously self-centered Batman (Will Arnett).

That’s right, I said Batman! Directors Phil Lord and Chris Miller (both Cloudy with a Chance of Meatball movies, along with 21 Jump Street and its just-released sequel) were blessed with a generously wide berth in terms of the LEGO characters they could bring to the screen. In addition to its own roster of characters, LEGO has struck licensing deals with some of the most lucrative film franchises of all time. The result has been a wide variety of popular toys and videogames featuring LEGO versions of Star Wars, Lord of the Rings and Harry Potter, as well as DC and Marvel Characters. (The LEGO Movie was distributed by Warner Bros., which also controls DC’s marquee superheroes; meanwhile, Disney owns Marvel Entertainment. So take a wild guess as to which comic book universe’s superheroes made it into The LEGO Movie.)

To their credit, Lord and Miller deploy these characters in ways that are inspired, but also acknowledge their place on the pop culture landscape. The culmination comes during a cameo-heavy council of the remaining Master Builders. We get a glimpse at everyone from Abraham Lincoln to Millhouse from The Simpsons. Michelangelo the painter and Michelangelo the pizza enthusiast. There’s also Superman doing his best to avoid a clingy Green Lantern, and everyone getting elderly wizards Dumbledore and Gandalf mixed up with one another. It sounds like a recipe for disaster — or, at the very least, a jumbled mess — but it accurately reflects the way kids play with their toys. (Do you think a 5 year old cares that Wonder Woman wouldn’t ordinarily hang out with a Ninja Turtle?) Lord and Miller do a nice job of servicing each character while briskly moving the action along before some of their younger viewers have a chance to get disengaged.

“All I’m asking for is total perfection.”

It’s a good thing too because the main story is basically a knowing, kid-friendly gloss on The Matrix. Fortunately, The LEGO Movie is so funny and possesses so much kinetic visual wit that you almost completely forget it’s essentially a 100-minute commercial for tiny plastic blocks. (The revelation of what the “Kragle” and “Piece of Resistance” actually are gave me a particularly hearty chuckle.) The movie also incorporates some poignant moments when Emmet realizes there might be something special about him after all. On the other hand, I felt like the film’s message about not putting any limits on your imagination became somewhat garbled when the heroes decided that following instructions might be the best course of action.

But this is a minor quibble in what is a thoroughly delightful and imaginative production. The LEGO Movie features an all-star cast of voice actors who also happen to fit their roles wonderfully. (As opposed to being cast solely for star power.) Pratt brings the same enthusiastically dim sweetness to Emmet that he does to Parks and Recreation. Few people play petulant as well as Ferrell, while Banks provides some welcome spunk to what could be a stock female character. Freeman and Neeson deliver their loosest work in years in roles that tweak their respective big-screen personas of all-knowing oracle and Irish badass. Arnett, however, steals the show as a comically dark Batman. This portrayal will be music to anyone who grew weary of Christopher Nolan’s largely humorless take on the Dark Knight.

That cast of characters provides the basis for a solid story, but The LEGO Movie piles on a few more that don’t click quite as well. This includes the unhinged Metal Beard (Nick Offerman), though I did enjoy the temperamental Unikitty (Alison Brie) and the manic single-mindedness of spaceship-obsessed Benny (Charlie Day). There’s also room for vocal cameos ranging from Lord and Miller’s Jump Street stars to Anthony Daniels and Billy Dee Williams reprising iconic roles. All that, plus Shaquille O’Neal as a LEGO version of himself!

The LEGO Movie turned out to be a blockbuster in every sense of the word. The filmmakers gleefully mashed together every toy at their disposal and (literally) ripped through the LEGO world they created. This is the rare madcap adventure that is equally pleasing to both adults and children. But it’s the limitless, juvenile spirit of play that carries the day.

The Lego Movie is presented in an aspect ratio of 2.40:1. The high-definition 3D image is arrived at with a standard dual MVC codec at an average of 25/14 mbps. The film was shot natively in 3D, and Warner Bros. has wisely given that astounding version of the movie its own disc. As you might imagine, there’s a lot going on here from a visual standpoint. Thankfully, the 3D serves to enhance and enrich all the amazing visual effects work done on this film.

There are a few “poke you in the eye” moments early on with Vitruvius’ staff, but the film doesn’t overly rely on this sort of effect. (The most notable repeat occurrence comes during car chases and harmless-looking LEGO bullets.) Otherwise, the 3D effect is used to provide a sense of depth that helps you appreciate the amount of detail in every block. This is also an incredibly versatile presentation that shines whether the setting is bright (Cloud Cuckoo Land), relatively rustic (The Old West) or surprisingly dark (Lord Business’s oppressively tall tower). Color, contrast and black levels are spot on in every instance.

Despite the fact that the visual effects team for this film went to great lengths to make it seem like they’d utilized more primitive animation — the computer effects are most evident in the characters’ facial expressions — this presentation is as impressive and sophisticated as they come.

The DTS-HD Master Audio 5.1 track is, at first listen, as maniacally aggressive as the movie itself. But upon closer inspection, there’s a method to the (sonic) madness. Sure, the louder sequences are what immediately stand out, but it’s not long before you realize every single sound on screen is accounted for. Want thumping bass? Just wait until Batman shows off his subwoofers. (Or listen to Neeson’s scary brogue.) Hankering for some dynamic directionality? You’re in for a treat during any of the myriad action/chase sequences. What’s arguably most impressive is that absolutely zero percent of the dialogue is sacrificed in these chaotic circumstances. Immersion is consistently present without being overbearing. This is an expertly-balanced mix that frankly could’ve easily handled a 7.1 presentation. As it stands, it matches the visual quality brick for brick.

All of the bonus material is presented in HD and can be found on the 2D Blu-ray disc.

Commentary with Filmmakers and Cast: Directors Phil Lord and Chris Miller are joined by Chris Pratt (Emmet), Alison Brie (Unikitty), Will Arnett (Batman), and Charlie Day (Benny) for a raucous chat. The nuggets of production insight from the directors fight for time with the chop-busting actors, who are only occasionally paying attention to the movie. Only listen to this if you don’t mind hearing funny people try to crack each other up.

Batman’s “A True Artist”: (1:12) An expansion/music video of one of the film’s funniest gags: Batman’s dark, brooding stab at a music career.

Enter the Ninjago: (2:13) Re-imagines key moments from The LEGO Movie with one key difference: this time a ninja helps save the day. The fact that Pratt wasn’t voicing Emmet in this comedic segment was incredibly distracting.

Bringing LEGO to Life: (12:36) Ah, here’s Pratt’s voice as Emmet hosting this breezy behind-the-scenes doc. Obviously, a lot of work went into this movie — production designer Grant Freckelton gets a shout-out, as does the entire animation crew in Australia — but it’s not surprising to see they also had a blast making it. This concludes with a glimpse of the red carpet premiere.

“Everything is Awesome” Sing-Along: (3:19) It’s exactly what you’d expect, though at least the lyrics are presented in creative ways. Good luck getting this song out of your head.

See It, Build It: Features an introduction with senior designer Michael Fuller (0:49) where he shows us how to build a double decker couch (3:53) and Emmet’s car (2:55). There’s also an introduction with modeling designer Adam Ryan (0:41) and we see how he constructs a digital version of the same couch (2:11) and car (1:51) on a computer. A nice, somewhat interactive peek at the film’s mix of practical and digital effects.

Stories from the Story Team: (4:02) We see some ambitious unused storyboards — along with stuff that made the final cut — accompanied by comments from the artists who created them. Another neat look at the creative process.

Fan-Made Films — Top Secret Submissions: (3:51) Lord and Miller challenged fans to create 15 to 30-second LEGO short films to be (briefly) featured in The LEGO Movie. We see some impressive runners-up along with the winning submissions that made the final cut.

Outtakes: (2:33) Amusing, but skippable collection of flubbed lines by the LEGO characters. Since these “mistakes” are obviously orchestrated it’s hard to get the spontaneity of a genuine gaff.

Additional Promotional Content: (3:51) Emmet and Batman try to sell us on The LEGO Movie in separate segments, but I preferred the audition segments with different members of the LEGO cast. At least the orchestrated auditions are funnier than the orchestrated outtakes.

Alleyway Test: (0:55) This is the first animation test done for the film, and it shows Wyldstyle building a motorcycle in a single shot.

Deleted Scenes: (3:20) Storyboard versions of two deleted scenes from earlier iterations of the film. They are accompanied by demo voice actors, rather than the starry cast, and are ultimately inessential.

Dream Job — Meet the LEGO Builders: (13:28) Provides a closer look at the impressive work  these LEGO artists do, and examines the collaboration between the filmmaking and toy-building teams. Most importantly, no one is hiding from the fact that these people play with toys for a living.

I don’t imagine we’ll be seeing any double-dipping anytime soon. Warner Bros. has gone all out with this spectacular “Everything is Awesome Edition”, which includes a top-notch A/V presentation and a treasure trove of bonus features. (Even if a few are skippable.) There’s also a collectible Vitruvius LEGO mini-figure included in the set.

And I haven’t even mentioned the part where you get to own The LEGO Movie, one of the funniest crowd-pleasers in recent years.