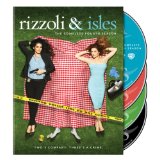 It’s hard to start a series in its fourth season. That’s particularly true of today’s huge mythology-arc shows that require you to be up to date at all times. Such was the task I found myself facing when we got a copy of Rizzoli & Isles to review. Fortunately, this is one of those pleasant exceptions to the rule. While I’d suggest that newcomers pick up the first three seasons anyway it’s not an absolute necessity. So if, like me, you’re discovering this one a little late, fear not. They’ll be a little work to catch up, but the fun kind.

The premise here is dirt simple. They’ve taken the buddy cop idea and found a way to work in the forensics science fad and deliver a procedural with a few twists. Angie Harmon plays Detective Rizzoli. She’s wanted to be a cop all of her life and is living the dream working with a special unit out of Boston PD. Her best friend in life happens to be Dr. Maura Isles, who is the Chief Medical Examiner for the unit and is played by Sasha Alexander. These are the kind of friends who finish each other’s sentences and share a lot of history together. That’s not to say they are at all alike.

Rizzoli is a relative free spirit. She doesn’t let a lot of things get her down and doesn’t take things outside of the job very seriously. Dr. Isles is a bit of a Bones clone. She has difficulty in social settings at times and she is an encyclopedia (for those of you under 20, look it up) of information. She has an obsessive need to cite research when confronted with a situation. She has the Spock-like aversion to making a guess or speculation of any kind. There’s a little of Monk’s OCD going on here as well. In spite of the differences, they work well. Each fills in for the other’s deficiencies, and criminals don’t stand a chance against them.

The detective unit includes Vince Korsak, played by McGyver’s favorite con man Bruce McGill. He’s an easygoing guy here who manages to do the job quietly. Lee Thomas Young is Detective Barry Frost. Frost is the requisite tech wizard on the team. Jordan Bridges joins the squad this season as newly minted Detective Frankie Rizzoli, Jane’s younger brother. Frankie’s eager to please and soak up as much as he can. Of course, he’s very green and prone to rookie mistakes. Together they basically solve a new crime each week.

The show’s mythology arc is found with the friends’ family lives. The Sopranos’ Lorraine Bracco is the Rizzoli matriarch, Angela, and runs the cafe inside the precinct. Dad walked out on the family in earlier episodes. We get a bit of that story when he returns to announce he has cancer. Frankie isn’t Jane’s only brother. Tommy (Egglesfield) is trying to get his own life together. He has a kid but isn’t married to the mother. He was involved in an earlier season tragedy that has left him scarred and about to come into a settlement.

Isles has a more complicated family life. She recently found out that her real mother was Hope (Lawrence) and that her illegitimate father is Patrick “Paddy” Doyle, a kingpin in the Boston Irish mob. He’s currently awaiting trial for all manner of bad things. Isles tries to cope with the discovery through her work.

If this all sounds pretty complicated, it is, but not to worry. I found that the information I needed came to me with little effort, and I seldom found myself lost. There’s enough exposition to keep a newcomer grounded in whatever the story of the day happens to be. The family stuff is the framework around which the crime of the episode is broken up. The lightness of the relationship is a nice balance to the often grisly and intense crimes the pair is called upon to investigate.

I was also watching Major Crimes and found the two shows shared a few similar episodes this season. Rizzoli & Isles dealt with the death of a senator’s daughter while Major Crimes was handling the death of a congressman’s son. Rizzoli & Isles dealt with a murdered driver ed teacher who threatened and sexually abused students, while on Major Crimes it was a swimming coach. Both shows feature the return of serial killers who were a big part of a previous season. In this show the pair is invited to do a symposium on the killings for law enforcement officers when their staged crime scene turns real. Both appear to share props like the Blue Moon brand beer they share. Both air on TNT and likely share a universe together.

The episodes rely on both Rizzoli’s investigation skills and Isles’ scientific approach. A drowned girl’s murderer is found because Isles analyzes the water in her lungs while Rizzoli puts together the pieces of her life. Sometimes the family lives and crime lives collide. When Tommy’s baby is being baptized, a smell leads to a body inside the baptismal font. There’s a Strangers On A Train episode. It seems that plot device has turned up on pretty much every cop show ever made. There are killer clowns and hoarders. Violent hockey moms and drag races that go boom in the night. Basically, there’s a little something for everyone.

Of course, the real focus of the show is the chemistry between these two characters. Fortunately, it comes across quite natural and real. I can believe these ladies have known each other all of their lives. Both actresses have done these kinds of shows before. You might remember Angie Harmon from Law & Order’s heyday. And while she is actually not related at all to Mark Harmon, we all remember that Sasha Alexander worked with him on NCIS. I guess you could say they are co-star-in-laws.

You get 16 episodes on four discs. There is a 20-minute inside feature and a short feature on filming in LA for Boston. I’m not sure I’d be wanting to brag about that part. It likely upsets proud Bostonians when they see places that aren’t the real locations. You can’t fake a city’s culture and feel.

The show has a ton of energy and works as a somewhat clever procedural. “Am I being wordy?”

Gino Sassani is a member of the Southeastern Film Critic's Association (SEFCA). He is a film and television critic based in Tampa, Florida. He's also the Senior Editor here at Upcomingdiscs. Gino started reviewing films in the early 1990's as a segment of his local television show Focus. He's an award-winning recording artist for Omega Records. Gino is currently working on his 8th album Merchants & Mercenaries. Gino took over Upcomingdiscs Dec 1, 2008. He works out of a home theater he calls The Reel World. Favorite films: The Godfather, The Godfather Part II, The Body Snatcher (Val Lewton film with Karloff and Lugosi, not the pod people film), Unforgiven, Gladiator, The Lion King, Jaws, Son Of Frankenstein, The Good, The Bad And The Ugly, and Monsters, Inc.
The Lego Movie: Everything is Awesome Edition (Blu-ray 3D) Almost Human (Blu-ray)