Posted in: Disc Reviews by Brent Lorentson on June 17th, 2014 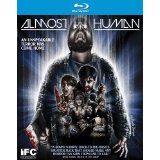 First I just have to say that the cover art design for this film is one of the best looking covers I’ve seen in a long time.  The fact that they actually took the effort to get an artist to design their cover is simply the first step in sucking the viewer into this 80’s sci-fi/ horror realm. Looking at this cover simply reminded me of the days working in a mom-and-pop video store when most of the horror titles were not just a collage of pictures thrown together in Photoshop, but  instead an artist would be assigned and create these beautiful and amazing covers.

When it comes to Almost Human, writer/ director Joe Begos seems to know exactly what it means to make an 80’s throwback film, and he welcomes the viewer to come along for the ride.  It seems to be a trend with the new up and coming guys in horror to look to the 80’s horror genre, Ti West (House of the Devil) and Adam Green (Hatchet) are just a few of these throwback directors who seem to have a love and appreciation of the time period in horror and embrace it.  Almost Human is a film that belongs on VHS, back in the era when practical effects still ruled the genre.

The film wastes no time getting started as Seth (Graham Skipper) is speeding down the highway trying to reach his friend Mark.  The panic is a result of Seth’s belief that aliens have come to the town and are abducting people.  Of course when Seth tries explaining this to Mark (Josh Ethier) and his girlfriend Jen (Vanessa Leigh) he comes off sounding completely insane, that is until the blue lights arrive and Mark is taken from his front yard.

Jumping ahead two years, Seth is starting to have his premonitions again and hunts Jen down to warn her that Mark is going to return.  But she’s already picked up the pieces of her life and has found a new love interest.  Its 100 miles away where a pair of hunters discover Mark has indeed returned, but he is far from the individual he once was.  The Mark who’s returned seems to be filled with the need to kill and return to the home he was ripped away from.

I’m all for this alien-possession type film that somewhat reminds of a cross between The Thing and Fire in the Sky.  But what I found not working for me is that the film just doesn’t have a rhythm and simply feels more like it’s only the first half of a film.  With a 79-minute runtime and factoring in that the film has a closing credit roll that goes on for several minutes, we get a severely lean film.  A little more exposition, a little more suspense could have made a difference here.

The film is an independent low-budget film, but that doesn’t mean that the film doesn’t still deliver on a horror and gore level.  Sci-fi and horror can be forgiven for a lot if the FX delivers where performances don’t.  I love that this film chose to stick with doing practical effects.  Whether it’s with stabbing effects, gunshot effects, or my favorite being the effect where Mark spreads the evil that is within him, all the effects manage to not just hold up but be impressive.

With the key three actors the performances work well for the film, but it’s the cast that surrounds them where the talent seems to fall apart.  But considering the filmmakers seemed to cast locals to the town and this being and 80’s style film, the casting is somewhat appropriate.

Almost Human is a film that seems to just beg for a cult following, but only time will tell if that following will come around.  It’s a fun ride even if it does feel a bit abrupt.  There’s a little stinger at the end for those who can make it through the end credits.

Almost Human is presented in an aspect ratio of 2.35:1.  The 1080p image is arrived at with an AVC MPEG-4 codec at an average of 22 mbps. One of the first things that stands out about the film is that it seems to have a saturated look with possibly a blue filter to add to the cool tone of the film, but then in later portions of the film it seems it was filmed during a different season.  The trees that were once barren in other portions of the film seem to be lush with leaves, and it has a warmer look.  In the later portion of the film the blacks seemed a bit crushed, but nothing too distracting.  There is a fair amount of grain as well, especially noticeable in the news broadcasts, but this is simply to add to the 80’s look that the filmmakers were going for.

The DTS Master Audio 5.1 track is just what you’d hope for from a film that aims to absorb the viewer into their film.  The sound design here is pretty awesome; the most notable is when the aliens are communicating and delivering their threatening scream, it’s ear-piercing in a good way.  This is a scream you want to dread, and you just know when that scream is heard something unpleasant is sure to follow.  The dialog is clear, and the bass is used during the film for intense moments as you’d expect.

Audio Commentary with Joe Begos and Josh Ethier:  This is the commentary that I gleamed the most from about the guys and their motivation behind the film.  A good listen for those budding filmmakers.

Audio Commentary with Joe Begos, Josh Ethier, Graham Skipper and Cory Lockman:  Another solid commentary with crew members and the star of the film.

The Making Of: (45:06) This might be one of my favorite features on a disc in a long time.  This is a very comprehensive look behind the making of the film from concept to its debut at the Toronto International Film Festival.  Just this feature alone is worth the purchase of an already cool film.

Behind the Scenes: (5:12) A briefer look behind the scenes but still captures the tone of what the production was like.

On Set with Graham Skipper: (2:06) A video montage of the antics the lead of the film got into during the films production.

Toxin: (4:06) Here is a short film from Joe Begos that gives us a look at the seedlings of what would later develop into Almost Human and show us that he always seemed to have a style of his own.  It’s bloody, fun and direct to the point, which works for me.

Trailers:  We get an assortment of trailers for the film, my favorite being the vintage-style trailer.

Photo Gallery:  Stills from the film and production for you to scroll through.

Almost Human is one of those films that I think is going to gather steam as it gets exposed to a wider audience on DVD and Netflix; it’s not perfect and has its share of shortcomings, but the film is still a fun little ride and works well as a film to watch with friends late at night.  Is it in a class up there with The Thing? Not a chance, but it’s still a cool little movie, and that’s enough for me.

Brent Lorentson is a horror writer and film critic based out of Tampa, Florida. With a BA in Digital Film, he co-wrote and co-directed Scavenger Hunt. His short stories have appeared in various horror anthologies. In 2019 his short script Fertile Blood will be a part of the anthology horror film Slumber Party. He is currently working on his first novel A Dark and Secret Place set to be released in late 2019. Favorite Films: Taxi Driver, Fight Club, I Saw the Devil, The Wild Bunch, Dawn of the Dead, A Clockwork Orange, Pulp Fiction, Heathers, The Monster Squad, and High Fidelity.
Rizzoli & Isles: Season 4 Transformers Animated: The Complete Series