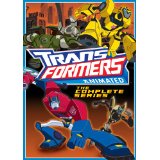 As we get even closer to the release of Michael Bay’s next foray into the Transformers universe with Transformers:Age of Extinction, Shout factory releases yet another series to help whet our appetites. As a kid growing up in the 80’s it was impossible to exist without knowing who Optimus Prime was or being able to hum (if not sing) the theme song to the cartoon.  But since the release of the original cartoon there have been so many spinoffs it’s hard to keep them all straight.  In 2007 Cartoon Network and Hasbro Studios set out to capture the imaginations of a younger audience following the success of the movies.  How does the series stack up to the 80’s classic?

First I just want to get out of the way that I’m not a fan of how they changed the overall look of the Transformers.  Back in the 80’s they had a more box-like look and, well, seemed like more traditional “robots in disguise”.  But in this new series they have more human like features, and a slender look and small waists…Basically the look is just very jarring from the traditional look, and it took some time getting used to.  David Kaye does a decent job with the voice work of Optimus Prime but just doesn’t deliver the commanding tone that Peter Cullen delivered in the original 80’s series.

Previously I had reviewed the Energon series which, though it had its drawbacks, was a fun show to watch.  How does the show do as a standalone show?  Well, this is not the cartoon I grew up with, and this version is more geared to a much younger audience.  The surprising move is in the decision of making the key human for the audience to follow a young girl Sari (Tara Strong).  Sari seems to be the human who is trusted with a key that contains the power of Cybertron and has the ability to heal and upgrade the Transformers when the key is inserted.  It takes some time to explain just why Sari is the chosen one; seriously, it’s not till the third season, and by then the show has taken some radical twists at this point.

The show does follow the same format as every other Transformer series before, the long standing feud between Autobots and Decepticons while humans get stuck in the middle of the war.  This time, though, our friendly Autobots are not the elite warriors we are used to but instead nothing more than grunts who manage to land on Earth by mistake.  Megatron is thought to be dead, but his head is discovered by a young boy who keeps it.  Fifty years later this boy is now a renowned scientist that specializes in the creation of robots that he has developed from the technology inside of Megatron.  Isaac (Tom Kenny) is Sari’s father, and the two are in place as the human aides to assist the Transformers whenever things go wrong.

A lot of the show spends its time on Earth instead of traveling through space and onto Cybertron.  Sure, they do leave Earth from time to time, but never for too long.  What the show does offer are some Dinobots which could explain the release of this series so close to the release of Age of Extinction.  The origin of the Dinobots this time around is through one of Isaac’s creations that simply get out of hand, and when they shed their dinosaur skins, unfortunately for some reason their look had me thinking they more closely resembled the robots from Voltron more so than Dinobots.

Even though the series is episodic, it does continue to have a progressive overarching story that moves along.  Megatron seems to always be trying to get a body so he can have his rule over Cybertron, while his associates seem to just be bumbling idiots, and Starscream, his right-hand man, seems to just want nothing more than to remove Megatron from existence so he can rule over all the Decepticons.  The Autobot that seemed to get on my nerves the most is Bumblebee (Bumper Robinson); he’s always been the young one of the group, but in this series he’s just a reckless buffoon who just gets into as much trouble as Sari.  It pains me to say it, but I appreciate Michael Bay’s version of Bumblebee much more.

The big draw for Transformers is the fights between the giant robots and the destruction that follows.  What gets a little distracting is that throughout the series and even in episodes, it’s hard to actually gauge the scale of the Transformers not just to humans but towards one another.  At times they seem to scale tall buildings, while other times they seem to be just a few feet taller than humans.  Then when you have sequences where they are pinned against Mega Supreme, the Transformers seem to be nothing more than ants.

In the end, though, the series is fun, but still I’d have to say it’s the weakest of the series that have come before.  Transwarped, a series of three episodes during the third season, seemed to be the strongest of the series as well as the most entertaining.  Here the writers seemed to capture the spirit of the original series, and they simply had fun with these characters, putting them in crazy battles and changing the dynamic of the characters we thought we had figured out.

If you’re looking for a series to keep your kids occupied and entertained, this show will do the job, but if they are teenagers or older, well, they may have outgrown this edition of the Transformers.  But for the hardcore fans, it’s at least worth giving a shot.  Hearing Lance Henriksen as the voice of a bounty-hunting Transformer, Lockdown was pretty cool and is a character that a fan of any age can appreciate.  But for those of you who do have younger kids and you plan on getting them this series, keep your pocketbook handy,  because this will surely have them begging for all the toys soon after.

Brent Lorentson is a horror writer and film critic based out of Tampa, Florida. With a BA in Digital Film, he co-wrote and co-directed Scavenger Hunt. His short stories have appeared in various horror anthologies. In 2019 his short script Fertile Blood will be a part of the anthology horror film Slumber Party. He is currently working on his first novel A Dark and Secret Place set to be released in late 2019. Favorite Films: Taxi Driver, Fight Club, I Saw the Devil, The Wild Bunch, Dawn of the Dead, A Clockwork Orange, Pulp Fiction, Heathers, The Monster Squad, and High Fidelity.
Almost Human (Blu-ray) Louie: Season 3