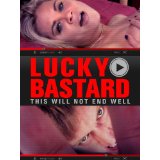 You know exactly what that kind of an intro means. You should. The found-footage genre has been around even long before it was turned into a modern trend by The Blair Witch Project. Since that time the genre has appeared in both large- and small-budget films. The shaky footage usually covers a variety of sins by the filmmakers. Rarely does the genre have anything clever or new to dispense. That’s not exactly true with Lucky Bastards.

When we meet Dave, we already see a few red flags. He’s not comfortable around the cameras and makes inappropriate remarks to Ashley. Yes, you can actually say something inappropriate to a porn star. Who knew? Ashley is ever-keen to the warning flags, but Mike’s attitude is you never stop filming. He’s a “the show must go on” kind of guy. He’s constantly having to smooth over things between Ashley and Dave in order to get them both to the money shots. It works, until it doesn’t, and Dave has to be asked to leave. Now no one is happy, but one of them is going to do something about their unhappiness. The result? Did you forget about that bloody aftermath video?

Director Robert Nathan leans more toward the reality television field than the more traditional found-footage realm. That plays out so much better, because there isn’t as much shaky camera work. These guys are, after all, supposed to be professionals. I think he makes a mistake, however, going for the NC-17 rating. It’s not necessary to the important beats of the film. With very little editing Nathan could have shaved a few seconds of the more graphic sexual material and made his film far more accessible with the R brand. What is confusing is that in several of these sex scenes he does limit himself to the R material, and in one case thankfully blurs the graphic details of one of these encounters. Why blur one and not another is a bit of a mystery to me. There are also some fleeting full frontal male nudity shots that I think most of us could do without. Nathan doesn’t overdo it and shows some understanding that these shots won’t endear him to a male audience. In the end it’s not a matter of morality or prudishness but a dollars-and-cents issue of audience accessibility. Credit Nathan for finding a twist that was hidden in plain sight.

The acting is actually above average for this kind of a budget. While Jay Paulson can totally get away with a deadpan performance that would not have worked anywhere else, Don McNamus is a stand-out here in every way. His portrayal is as real as it gets. Mike is a totally convincing character and the true glue that holds this all together. Betsey Rue has to do more than just look hot here. She’s no stranger to the horror film genre and plays the character with a surprising amount of layers. She’s a mother, and it actually comes through just enough to make her more sympathetic than you might expect. Yes, she’s got the stuck-up prima donna thing going, but the rest is just enough to allow us to root for her when the bloody starts.

Like the guerilla filming style of Mike in the film, one gets the feeling that a lot of this footage was stolen around and about town. The fact that it appears that way is a perfect fit for the production style. He makes good use of the budget and allows the focus on the characters. That alone is somewhat rare in these kinds of films. It’s a bit interesting to note that the character name Ashley Saint gets listed in a production credit.

The DVD contains a few extras. There’s a director’s commentary. The most interesting extra is a 7-minute “promo reel” which features input from co-writers Lukas Kendell and Robert Nathan. You’ll also find several versions of a trailer. The sexual content can be pretty graphic, so you need to make sure you’re up for that sort of thing. Still, it’s not as bad as the NC-17 rating might suggest. It’s gonna cost them in the end, I’m afraid. “Those who play with fire eventually get burned.”

Gino Sassani is a member of the Southeastern Film Critic's Association (SEFCA). He is a film and television critic based in Tampa, Florida. He's also the Senior Editor here at Upcomingdiscs. Gino started reviewing films in the early 1990's as a segment of his local television show Focus. He's an award-winning recording artist for Omega Records. Gino is currently working on his 8th album Merchants & Mercenaries. Gino took over Upcomingdiscs Dec 1, 2008. He works out of a home theater he calls The Reel World. Favorite films: The Godfather, The Godfather Part II, The Body Snatcher (Val Lewton film with Karloff and Lugosi, not the pod people film), Unforgiven, Gladiator, The Lion King, Jaws, Son Of Frankenstein, The Good, The Bad And The Ugly, and Monsters, Inc.
Blood Ties (Blu-ray) The Glades: The Complete Fourth Season