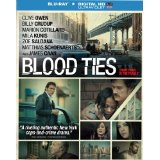 It’s a sad state of affairs. The road that Blood Ties has taken to get to this Blu-ray release is far more interesting than the film itself. It all starts with a French film Les liens du sang that was itself a reflection on the American cop drams genre. One of the original French screenwriters collaborated to bring the idea full circle to become an American cop drama. The film made the film festival circuit with mixed reviews and results. For some reason Director Guilaume Canet decided to go back to the editing room and remove nearly a half hour of the original film’s running time. I didn’t see the movie in its original form, but it seems to me Canet gutted the film for its American home video release. The result is a story that is difficult to follow, contains numerous plot holes and hanging plot threads and displays an uneasy pacing at best. I wish I could see what is missing. I can’t help but feel that this could have been and in fact once was a better movie than it is now.

This is essentially the tale of two brothers. Chris (Owen) is coming home after spending years behind bars. He’s on a furlough and keeps his freedom only if he can maintain steady employment and a place to live. Frank (Crudup) is an NYPD police officer who has taken some heat for his criminal brother. There’s a lot of bad blood between them, but family is family, and Frank is allowing Chris to live with him and their father (Caan). Chris’s attempts to go straight literally go up in smoke, which takes us to that oldest of crime drama cliché’s, the “one last job”.

Frank is living with the ex-girlfriend of a guy he got locked up. That kind of thing never ends well and takes Frank out of contention as the “good” guy in the piece. In fact there are no good guys here. There are no redeemable characters here, and that’s partly because there is so little character development here. I can only assume that a lot of that was left on the cutting room floor when Canet went on his cutting spree. We get glimpses of character motivation. After meandering for too long, the film makes odd jumps in time and logic. Suddenly Chris has a kind of crime empire with thugs and some kind of organization that we never see created. He ends up the kind of cardboard cutout thug who kicks the crap out of a guy while his goons loom menacingly at anyone who might think about interfering. Didn’t we see James Caan do this to a guy named Carlo once?

It’s hard to really judge the work of Clive Owen, Billy Crudup, or even James Caan. On the surface they appear to be all over the place, but again I can’t help thinking about what might be missing. When Bela Lugosi got his shot at playing the Frankenstein Monster, it was considered by many to be a complete disaster. What most people didn’t know is that dialog was completely cut from the character and a plot point that he was blind was also cut. The result was a stumbling performance with a lot of silent mumbling. Who knows how the performance might have been viewed if the character’s situation hadn’t been gutted in editing? I can’t help but wonder if the same kind of thing isn’t at work here.

The film is an incredibly slow burn for the first hour. Flashbacks reveal a little of how the brothers ended up in their current situation. Things pick up in the second half with an armored car ambush and shootout with the cops. But even when the action picks up, I felt I was lost most of the time. It’s hard to enjoy a film when it feels like I’m seeing a terrible late-night-television edit.

Blood Ties is presented in its original aspect ratio of 2.40:1. The 1080p image is arrived at with an AVC MPEG-4 codec at an average 35 mbps. The film does excel at its 1970’s production design. It’s a faithful look at that distinctive time. The look of the film captures the appearance of 70’s film stock complete with grain and a reproduction of the color palettes from that period. The style isn’t in-your-face or overdone. It’s quite a natural look to be sure. There’s nice texture in the image. Black levels suffer a bit, but it’s a necessary result of that kind of authenticity.

The DTS-HD Master Audio 5.1 is a one-sided affair. Plenty of vintage 70’s music is accented by a nice guitar-filled score. Dialog comes through clearly. Not much in the way of subs, and the audio presentation only truly shines with the music.

Behind The Scenes: (26:22) French with English subtitles.

I feel like I’m reviewing half of a film here. There are obvious themes of brotherhood that do come through. Still Canet struggles to capture the American culture he’s using to focus his film. The mad edit shows a lack of confidence that was likely there from the time of the film’s production. He’s on shaky ground, and he knows it. If you think you’re getting a complete movie here, “Don’t fool yourself.”

Gino Sassani is a member of the Southeastern Film Critic's Association (SEFCA). He is a film and television critic based in Tampa, Florida. He's also the Senior Editor here at Upcomingdiscs. Gino started reviewing films in the early 1990's as a segment of his local television show Focus. He's an award-winning recording artist for Omega Records. Gino is currently working on his 8th album Merchants & Mercenaries. Gino took over Upcomingdiscs Dec 1, 2008. He works out of a home theater he calls The Reel World. Favorite films: The Godfather, The Godfather Part II, The Body Snatcher (Val Lewton film with Karloff and Lugosi, not the pod people film), Unforgiven, Gladiator, The Lion King, Jaws, Son Of Frankenstein, The Good, The Bad And The Ugly, and Monsters, Inc.
Scavenger Killers Lucky Bastard