Posted in: No Huddle by Brent Lorentson on July 3rd, 2014 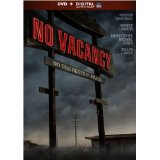 After the number of horror films I’ve seen, the prospect of going on a road trip and taking a back road seems like just about the worst idea anyone could ever have.  Whether it’s in the mountains where you have to fear backwoods cannibals (Wrong Turn) or it’s the open desert highway and fearing maniacs in semi-trucks (Joy Ride), really, is anywhere safe to travel?  Even the quaint little roadside motel is a place to fear, and I don’t mean the bedbugs either.  No Vacancy comes along on DVD as families and friends are getting ready to embark on the open road, and in case none of the previously-mentioned films were enough to make you think twice about that road trip, perhaps No Vacancy will.

A group of friends are on their way to Vegas; considering they’re all young twenty-somethings, I seriously doubt it’s to catch Celine Dion live on stage.  Drinking and plenty of debauchery seems to be on the menu for these guys, that is until they get two flat tires and are stranded in the middle of nowhere.  The guys set off to find help while leaving the girls behind with the car.  The help that the guys do find turns out to be better than they ever could have expected.

At a little rest stop where there is a motel and a little dinner, there is a group of young people that work around the area and take in the guys that are in need of help.  But our travelers are treated to free drinks and food while their car gets repaired.  Of course all this should seem too good to be true, but no one seems to question anything, even when the travelers are all put up at no charge in the motel.

What follows is an odd mix of Saw meets The Devils Rejects, unfortunately not in a good way.  What I give the film credit for is that it looks good, but this is the kind of polish that you would more associate with a Michael Bay film and not a horror film.  This is a film that should have gone a darker direction in terms of its look and style.  Considering the trailers promote the film “from the director of You’ve Got Served”, it leaves little for the horror fans to get excited about.

Sure, there are some creative and gruesome kills throughout the film, but the film just doesn’t seem to have much substance to it.  The travelers are characters that are relatively hard to sympathize with considering they are cookie-cutter characters who just fill in the spots as victims to add to the body count.  As for “the helpers” at the motel, even though they are cold-blooded sociopaths, they are characters the audience can at least sympathize with once it’s discovered why they are out to kill these weary travelers.

Though it may lack in the originality department, the film is still enjoyable.  The good-looking cast, solid camera work and decent kills at least make the film a brainless thrill ride.  This isn’t a film that is attempting to break the mold of horror but instead just be a film to enjoy late at night.

Brent Lorentson is a horror writer and film critic based out of Tampa, Florida. With a BA in Digital Film, he co-wrote and co-directed Scavenger Hunt. His short stories have appeared in various horror anthologies. In 2019 his short script Fertile Blood will be a part of the anthology horror film Slumber Party. He is currently working on his first novel A Dark and Secret Place set to be released in late 2019. Favorite Films: Taxi Driver, Fight Club, I Saw the Devil, The Wild Bunch, Dawn of the Dead, A Clockwork Orange, Pulp Fiction, Heathers, The Monster Squad, and High Fidelity.
Sinbad: Make Me Wanna Holla The Bridge: Season 1