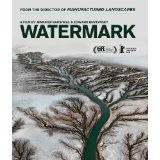 Anyone who ever sat through an elementary school science class knows that about 70 percent of the Earth’s surface is covered in water. We’ve all heard the spiel, but I don’t imagine most of us spend much time contemplating how truly staggering that figure really is. Watermark seeks to convey the many different ways humans and the planet’s water supply affect one another. The documentary is maddeningly scattered, but it also manages to capture and convey a small part of the world’s awe-inspiring bigness.

Watermark is co-directed by documentary filmmaker Jennifer Baichwal and visual artist/photographer Ed Burtynsky. Baichwal previously directed 2006’s Manufactured Landscapes, which starred Burtynsky and his large-format photographs. For Watermark, the filmmaker and her former subject have teamed up for a globe-spanning, bird’s eye view at H2O.

“How does water shape us, and then how do we shape water?”

The film opens with a violent, torrential rush of brown silt being released at the Xiaolangdi Dam in China before smash cutting to the barren, arid landscape of the Colorado River Delta in Mexico. Watermark proceeds to flow freely and unhurriedly to Bangladesh, Greenland, Las Vegas, British Columbia, Texas and more. Each stop features breathtaking large-format footage — think of what you see when you look out the window of a plane — and has a laconic, poker-faced guide who describes the role water plays in their respective region.

This new collaboration is a harmonious mixture of Baichwal and Burtynsky’s artistic sensibilities, which closely adhere to the idea that a picture is worth a thousand words. As with Manufactured Landscapes, Baichwal eschews the traditional talking head commentary you see in most documentaries and lets Burtynsky’s stunning, poetic images do the dramatic heavy lifting. (A fair amount of the credit should also go to cinematographer Nick de Pencier, who is also Baichwal’s partner.)

The relative lack of human connection in this documentary is by design, as is the seemingly aimless way the camera wanders from one scene — and one part of the world — to the next. The goal seems to be to present these images and let each viewer fill the quiet spaces with his or her own experiences and sentiments. In other words, the filmmakers make a conscious point of making it seem like they’re not trying to make a point.

However, there’s a considerable downside to foregoing any sort of interesting or relatable human presence. Burtynsky appears on camera from time to time, but he’s not the documentary’s subject this time around and his presence feel a bit superfluous. As a result, there’s very little that serves as an anchor for any of the stops around the globe, so none of the stories we glimpse are nearly as impactful as they could’ve been.

That’d be ok if Watermark were a 91-minute documentary that was entirely comprised of stunning images and evocative music. But Baichwal and Burtynsky also try to incorporate personal stories, including the dire conditions at a tannery in Bangladesh and a “water guard” in a Far East rice paddy. Each of those subjects could probably make for a fascinating 60-minute documentary, but here they each get less than five minutes of screen time. On the flip side, the film also makes seemingly random stops at the famous Fountains of Bellagio in Las Vegas and at the U.S. Open of Surfing in California. The total lack of commentary at these more affluent locations seems arbitrary. It also leaves the door open for the suggestion that this film may not be as apolitical as it strives to be.

“For the first time we are not just passive watchers of what nature does…we are responsible.”

We get a few comments that hint at how dire the water situation is in some parts of the world. (The idea that humans are using more water than the Earth can produce is largely attributed to agriculture.) But there’s no call to action nor any particularly new or interesting information revealed here. (The closest we get is a pair of scientists talking about drilling into the Greenland Ice Sheet.) It’s a good thing Watermark bills itself as a slice of global life because the film only truly excels when it simply pulls (way) back and trains its camera on the natural and man-made marvels on the planet.

Watermark is presented in an aspect ratio of 2.40:1. The 1080p image is arrived at with an AVC MPEG-4 codec at an average of 28 mbps. Many of the arid, depressed landscapes make for an unavoidably drab presentation that doesn’t often stray from a gray-brown palette. The good news is those same arid landscapes are mostly static and allow for impressive sharpness and fine detail. On the other hand, some shots of aggressively rippling water and soot led to a few instances of aliasing. Mostly though, the camera pans are very deliberate, which allows the viewer to take in the amazing wide shots that are the film’s highlight. As I said before, images captured in this documentary are stunners; the Blu-ray doesn’t totally follow suit, but is still a strong effort.

The DTS-HD Master Audio 5.1 track, on the other hand, is a dynamic, enveloping experience that exceeded expectations. The film’s opening sequence is a sonic slow burn that eventually incorporates all elements of the surround sound field, including the majestic rumble of the subs. (The subs make return appearances to convey the earth-shaking heavy machinery at the Xiluodu Dam in China.) The little dialogue there is in the film remains confined to the front, allowing the rears speakers to pump out a variety of immersive noises. (The whir of a helicopter, crowd chatter, etc.) Both the sound design and the presentation on this disc are as good as you’d find in a Hollywood production.

Making of Watermark: (15:24) Baichwal, Burtynsky and de Pencier talk about the challenges of this particular production, which included gaining access to tough locations (Burtynsky’s connections helped with the Xiluodu Dam) and braving treacherous conditions to get certain shots. Camera operators were perched in precarious positions, but the scariest moment seemed to come during a helicopter ride through an impossibly narrow canyon that resulted in the film’s closing sequence.

Deleted Scenes: (15:20) Includes sequences in California (Discovery Bay and Salton Sea), as well as a dangerously foamy body of water half a world away. Since the film doesn’t have a traditional story, it’s hard to say these scenes were a significant loss from the final cut. Of course, there’s also some more amazing large-format photography. The scenes are not listed individually, but they are separated by chapters.

In Discussion with Ed Burtynsky and Jennifer Baichwal: (9:35) The co-directors sit down for a chat with critic Adam Nayman at Indigo Books in Toronto. They re-hash a lot of the stuff in the “Making of,” but I liked hearing about their process and collaboration. I wouldn’t have minded an unedited version of this Q&A.

Picture Gallery Narrated by Ed Burtynsky: (38:14) Burtynsky provides insightful background for each image presented here. Unfortunately, this can’t help but feel like a combination of a dry school lecture and somebody else’s vacation slideshow.

Most of the best documentaries I’ve seen illuminate a previously underreported subject or focus on a compelling personality. The hyper-detailed nature of docs also typically lends itself to more intimate storytelling. None of those things really apply to Watermark.

Of course, you could say this film has more in common with nature documentaries than it does with its more narrative counterparts. Still, I admire the fact that Watermark went against the documentary grain and aspired to jaw-dropping bigness while creating its own rhythm and (unsuccessfully) trying to include some compelling stories. The film may feel more at home on an IMAX screen than it does in your living room, but it’s still an impressive achievement.

Once Upon a Time in Vietnam Elton John: The Million Dollar Piano (Blu-ray)