Posted in: No Huddle by Brent Lorentson on July 9th, 2014 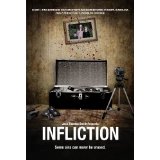 With all these found-footage films that seem to be coming out week after week, I wonder just how audiences will react when they finally get a scene that is shot on a tripod.  It will be hailed as a revelation, I’d imagine, and finally the world will be able to watch a film without pondering if they should have double-dosed on their motion sickness pills.  Yes, ladies and gentlemen, Infliction is yet another entry into the canon of found-footage films and is also another example of why it is a style that is not meant for everyone to try or to use as an excuse for a low budget.

Though this boasts that it is a horror film, I can’t help but shake my head and disagree.  Is the subject matter disturbing?  Perhaps for some.  Is it gruesome or violent?  Nothing too bad.  Instead this film is misdiagnosed from the get-go.  This is a family tragedy at best and has some heart to it, if only more attention was paid towards the performances and story, rather than film needless exposition.

John (Jason Mac) and Kenny Stiles (Elliott Armstrong) are two brothers who have come to the decision to seek revenge for those they hold responsible for ruining their childhood.  It takes time, but we learn how abusive their parents were to them, and after getting a reprieve and thrown into a foster home, just as the two begin to experience a happy life, they are ripped from the foster home and thrust back into the lives of their abusive parents.  These brothers have been through hell and simply are products of a broken system, and all they seem to want is revenge, only they also want to videotape it all as well.

What should follow is a brutal and unrelenting experience as we watch these brothers achieve their vengeance in an unflinching manner; after all, the camera should be the unblinking witness to their story.  Instead, just as things get violent, off goes the camera, or it turns away.  Unfortunately the filmmaker avoids showing the violence, afraid to commit to crossing the line and showing these young men become the face of vengeance. This is a film without a rating; there’s no need to tread softly with the violence, and it doesn’t need to be gory, but if you are aiming to present “the true events assembled together”, you can’t just decide to shut the camera off.

There are numerous victims who seem to be on this list of revenge, but really none of it matters, since after all the ones who caused the real problems are their own flesh and blood.  When we meet their sister, as you’d imagine, she’s just as damaged as the boys, only she has a different way of coping with her past.  This is where I feel the movie finally began, where they boys are finally confronting those who harmed them and made decisions that truly affected them.  Sitting back and being a fly on the wall for this interaction is far more engaging than the attacks made previously in the film.

By the time the siblings arrive to their parents’ home for the big confrontation, the rug seems to have already been pulled from beneath the brothers.  How the story unfolds is again more engaging than the front half of the film, but again, I couldn’t help but feel this is a family drama, and not a horror film.  What the film has going for it are some decent performances. Despite having a low budget, the filmmakers make do with the locations that they have. I support the message the filmmakers were trying to present: the violent nature of the characters’ childhood has caused them to evolve into the monsters who inflict harm in the end.  The message just lacks the punch in the presentation and simply left me shrugging my shoulders by the end.

Brent Lorentson is a horror writer and film critic based out of Tampa, Florida. With a BA in Digital Film, he co-wrote and co-directed Scavenger Hunt. His short stories have appeared in various horror anthologies. In 2019 his short script Fertile Blood will be a part of the anthology horror film Slumber Party. He is currently working on his first novel A Dark and Secret Place set to be released in late 2019. Favorite Films: Taxi Driver, Fight Club, I Saw the Devil, The Wild Bunch, Dawn of the Dead, A Clockwork Orange, Pulp Fiction, Heathers, The Monster Squad, and High Fidelity.
Elton John: The Million Dollar Piano (Blu-ray) No Clue