Posted in: No Huddle by Archive Authors on July 9th, 2014 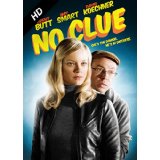 “She’s the damsel. He’s in distress.”

What happens when a stand-up comedian turned actor writes, stars in and produces his very first murder/mystery movie? Either a timeless classic or a case of wishing Colonel Mustard had greeted him in the Conservatory with a Candlestick before typing the title page.  Actor Brent Butt (Corner Gas/Hiccups) and director, Carl Bessai (Sisters and Brothers/Hiccups) have teamed up once again for, No Clue, a campy murder/mystery set in present day with a 1950’s feel. Brent Butt indicates in an interview in the Special Features portion of the DVD that his original intention was to create a dark murder/mystery. In my opinion, Brent Butt made a detective movie worthy of belonging in the ‘Cult Classic’ section of your DVD collection. No Clue is filled with wacky characters the viewer can’t help but want to investigate under the magnifying glass to try and figure out “Who-done-it?” along with the alleged detective.

No Clue is centered on Leo Falloon (Brent Butt), a non-detective posing as a detective. Leo is actually nothing more than a lonely advertising salesman. Kyra (Amy Smart), a gorgeous blonde, ends up in Leo’s office by mistake. Leo is so captivated by Kyra he never bothers to tell her she came to the wrong office. He tells her to have a seat and basically spill her guts. It is later revealed by Leo to his friend Ernie (David Koechner), that the real detective Kyra should have seen is on holiday for two weeks.

Kyra initially poses as a concerned sister looking for her “brother” Miles. Miles is a computer game creator who made the popular game “Curse World”, which stands to make a lot of investors very rich. Miles suddenly disappears, and Kyra wants to hire Leo to find him. Leo, aka “Ass Lips”, brings his friend, Ernie, aka “Fart Face”, in on the detective shenanigans, adding some much-needed comic relief to the script.

The two actors, Brent Butt and David Koechner have excellent chemistry on and off the set. A few clips of them hanging out between takes can be seen on the behind- the-scenes footage included on the DVD. It is quite apparent that their off-screen chemistry further complements their on-screen friendship. The natural back-and-forth banter flows with ease and at times is rather entertaining.

Other noteworthy characters in the film are; Mr. Horn (David Cubitt), who heads a computer game corporation, Church (Dan Payne), a corrupt cop with a chip on his shoulder who works for thugs like Mr. Horn, Mr. Horn’s spoiled, smart-mouthed daughter, Reese (Kirsten Prout), Nelson (Garwin Sanford), who also heads a computer game corporation, and Danny (Dustin Milligan), a junior computer programmer who works for Mr. Nelson. While most detective movies center on a hot femme fatale, let’s just say the character Danny offers a little sizzle to the screen for the ladies, instead.

No Clue is Brent Butt’s first admitted attempt at writing a movie in the murder/mystery genre. Those are some big “gumshoes” to fill, if you ask me. I give him props for having the guts to try it. As a writer myself, I can attest that script writing is often challenging, especially in the murder/mystery genre. It can be quite difficult to pepper scenes with realistic pieces of evidence that eventually have to tie back into one another in order to create the big “Gotcha!” ending. The clue to a good murder/mystery is to always keep your audience guessing. I think Brent Butt succeeded well in that realm with No Clue. Once all of the key players were introduced, it quickly became a guessing game trying to figure out who put Miles inside the chalk outline.

One might be quick to assume because Kyra immediately caught the eye of a quirky, overweight, nerdy wannabe detective, who is no Maxwell Smart by the way, that it makes for a no-brainer, typical detective movie. Wrong. There is nothing “typical” about No Clue. From the crazy characters, to the often roll-your-eyes-lame jokes, to Leo always innocently stumbling upon clues, to the actor Brent Butt, himself, wearing shorts with waxed legs, while posing as a water delivery person. Oh, yes, the waxed legs are a sight to behold. Ah, the things one must do in order to solve a crime ‘Inspector Gadget’ style. One scene I could have done without though was Leo puking after watching a fight between Kyra and Church. The vomit sound effects were a little too realistic and almost had me tossing my own cookies. Blech!

I must say, although Leo is annoying and goofy, I couldn’t help but root for him. He’s never prepared for anything. On his first official meeting with Kyra, he failed to bring a simple notebook and had to take notes on a tiny cocktail napkin. For a supposed detective, let alone a man, Leo seems to have no problem transforming into a scared little girl and running away from the sight of blood. He tries to convince himself it was red paint or catsup instead so he doesn’t faint. There are several times when Leo realizes he is in over his head, but that longing for Kyra and her insistence on leaving the cops out of it keeps the butterfingered, often rambling, bad-joke-telling, wannabe forging ahead to solve the crime and hopefully win the dame in the end.

Kyra, on the other hand, keeps coming to Leo’s rescue. She has moves like Jackie Chan and a Navy Seal combined…a real force to reckon with. Her strong character compliments Leo’s weak one. She’s the yin to his yang. And heaven knows he wants to yang her based on comments he tells himself like; “her skin is as smooth as a hardboiled egg…her breath, as warm as a fat guy’s armpit on a hot summer day.” Leo obviously knows how to woo a hot gal like Kyra. At one point Kyra invites Leo to her motel. Question is, did his charming wit and way with words work or not? You will have to watch the movie to find out.

In between cheesy one-liner jokes that could be included in a stand-up comedy routine, Brent Butt manages to keep the eye of suspicion shifting from one character to the next, thus keeping the viewer engaged. He did a great job of weaving in clues to complete the mystery of who did what, how and why. Here is an example: two loser guys who tried to pick up Kyra in a bar while she was waiting for Leo, get reintroduced later in the film. The men despised Leo for being with a girl like Kyra. Later, as Leo is being kidnapped by Church, the two bar losers happen to appear. They recognize Leo, and he recognizes them. After some instigating by Leo, Church and the two guys fist-fight while Leo escapes. This struck me as a clever way to get Leo out of a tight spot. It made for a great comedic scene.

The selection of music played throughout No Clue helped heighten the actions and emotions for each scene. At times the music reminded me of the 1960’s jazz played in Steve McQueen’s cop flick, Bullitt (1968). Being a huge fan of older jazz music, I must say jazz was an excellent pick for this detective movie. To me, jazz and mystery seem to go hand in hand quite well.

The topographical shots of Vancouver, British Columbia were amazing. Mr. Butt and Mr. Bessai really captured the beauty of the city both day and night. I never knew it was so breathtaking. I have now added Vancouver to my bucket list of places I’d like to see before I die. The various locations chosen for scene shooting were good too– showing different areas of Vancouver, from clubs, to restaurants, to motels, to a boat marina and several office buildings. I really loved the name of the bar where Kyra and Leo first met, The Tipsy Gator. Their conversation while trying to recall the name of that bar to arrange another meet-up was funny because all each could remember was that it had an animal in the name and neither could guess it right, but they managed to find each other in that club anyway.

The graphic artist who designed the illustrations for the opening and closing credits of No Clue deserves an award. The private-eye drawings were outstanding. I loved the use of bright colors and overall style. The illustrations had a strong 1950’s comic book look that appealed to the uniqueness of No Clue.

I will not reveal who killed Miles. There would be no point in watching the movie if I did. I will say that through a little scripted tease and twist, you will be saying “I knew it!” one minute and then, “No way!” the next. And then, “I knew it!” again. The revelation of the killer’s identity isn’t near as shocking as the ending of Saw (2004), but it was a little jolting just the same…kind of like drinking half of a Red Bull.

In conclusion, my dear Watson, I must say it wasn’t elementary after all. I thought the overall movie was good for a first attempt at creating a murder/mystery. Definitely one for the ‘cult classic’ files. But I believe Mr. Butt failed to deliver a super-shocking, “aha!” ending, which any good detective movie should do. After pounding the pavement, digging through files, interviewing witnesses, steaming open envelopes and spying over back fences, I can honestly say No Clue will either have you perched on the edge of your seat trying to guess who the killer is or have you asking, “Why didn’t I ‘get a clue’ and turn it off after the first 5 minutes?”