Posted in: Disc Reviews by Gino Sassani on July 9th, 2014 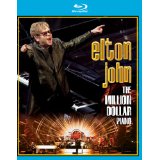 Few musicians have enjoyed the career that Elton John has enjoyed. From the release of Your Song in 1969, he hasn’t seen many years without hit records. He’s had number one songs in every decade since that day, and the hits continue to roll in. When the music industry changed, Elton managed to change enough to keep up with the times, yet hold on to the poignant songwriting that has made his songs stand out. I’ve been a fan since the Goodbye Yellow Brick Road days of 1973. When I was a kid and listening to candy pop, that’s what Elton was delivering. As I got older, it appeared Elton’s music aged with me. It was the time of classic melodies and thoughtful ballads. As I grow older, I find Elton is still keeping up.

Elton always found ways to reinvent himself. He was introduced to a whole new generation of children with his award-winning songs on The Lion King. He’s brought his music to the stage on Broadway and dabbled in the film industry. With a catalog that brings in over $6 million a year without lifting a finger, Elton remains one of the hardest working entertainers in the industry. Now in his 60’s, Elton’s taken the stage in Vegas. Unlike many of the performers before him who semi-retired in Sin City, Elton continues to deliver the same energy and passion he has for decades brought on the road. I’ve been to somewhere between 30 and 40 performances, and I’ve never been disappointed in the performance. His last show at USF had an uncharacteristically bad sound mix, but I know the songs well enough to keep up.

It’s not just the music that has changed. Elton’s early flamboyance was a product of his own youth and the times. Today he’s still an energetic performer with a flair for the sparkly attire, but it’s not near as wild as the old days. Elton got himself into rehab in 1989 and has proven that you don’t need booze and drugs to remain creative. He looks and sounds better than he did in his youth. The Million Dollar Piano is the next logical step in that evolution. Elton lets the piano and the stage setup deliver the antics. Happily, Elton uses the freedom to focus more on the music, and this show does that better than any concert release in recent memory.

First of all, there’s the “million dollar piano” itself. Yamaha created a new unique instrument for the show. After the success of The Red Piano, Elton wanted to follow it up with another unique piano experience. The tech geeks got together and came up with a grand piano with glass top and clear acrylic supports. The sides of the instrument are outfitted with LED panels that allow images to be displayed to reflect the mood of the songs themselves. The show might be called The Million Dollar Piano, but it actually ran just over $4 million to build. I was a bit skeptical of the idea at first. I didn’t want that much distraction from the music. Fortunately, the piano is more hype than anything else. I’m delighted that it really doesn’t change much, and you’re not getting the incredible designs and animations the buzz promises. I suspect it’s more of a “you have to be there” thing. It certainly doesn’t translate to anything that impressive on a high-definition screen. While most folks might feel let down by such a prospect, I’m quite happy with the results.

I’m happy because the music is what matters, and it’s done very well here. Elton has some of his original musicians here to create a tight and talented band. It’s always a joy to find Nigel Olsson back behind the drums. He’s one of the original trio that started the thing rolling back in 1970. Dee Murray was the third part of the group on bass. Sadly, he passed in 1992. Davey Johnstone is there playing the guitar and acting as musical director for the show. Davey might not have been there from the very beginning, but it wasn’t long afterward. By the time Elton hit it big, Davey was a fixture on guitar. Ray Cooper is another old standby on percussion. I saw Ray when Elton did his solo tour in 1979, and Elton’s not kidding when he says you wouldn’t want to meet him in a dark alley. He has the most nefarious stare, which you won’t see so much of here.

The band also includes Bob Birch on bass. Unfortunately, Birch committed suicide back in 2012 after suffering for years from injuries he received in a car accident. Kim Ballard provides the extra keyboards. John Mahon is a second drummer. Backing vocals are provided by Rose Stone (From Sly and The Family Stone), Tata Vega, Jean Witherspoon and Lisa Stone. Finally, the band is complimented by the arrival of The Two Cellos played by Luka Sulic and Stjepan Hauser. These guys are low on the mix, but they add a dynamic that makes this show special. I saw them on the more recent tour where they also served as the opening act playing their instrumental numbers.

The song selection is mostly taken from the old days. The only recent song is Circle Of Life, and even that one is now 20 years old. Nothing from the last two decades is included in the show. This is a set built for the real fans and not just the hit-paraders. Although most were popular singles at one time, there are songs like Indian Sunset, a favorite of mine from the Madman Across The Water album that features just Elton, at times a capella, and Ray Cooper on percussion. These are those kinds of moments that must have been magical for the attendees. The show nearly concludes with certain audience members invited on stage to gather around the piano for Saturday Night’s Alright For Fighting. I’m sure it’s a perk given to the casino’s “whales”.

All of this plays out in one of the largest auditoriums in the world. It’s Caesar’s Palace in Las Vegas. This particular show was performed September 28th, 2011. The stage is decked out in enormous props and a giant screen that gives the impression of an amusement park simulated ride at times. Again I think the effect is not going to look quite the same on camera as it did for the live audience. I suspect that while this release is absolutely superb, it’s nothing like it must be to be there.

The Bitch Is Back

Bennie And The Jets

I Guess That’s Why They Call It The Blues

Don’t Let The Sun Go Down On Me

The concert is presented in its original aspect ratio of 1.78:1. The 1080p image is arrived at with an AVC MPEG-4 codec at an average 35 mbps. The high-definition image presentation is the closest thing to being there. The image is razor sharp. Close-ups on Elton are clear enough to see droplets of sweat. The LED and screen effects are clear, but it’s very flat, so I’m not sure we’re getting quite the same experience. Black levels are excellent, providing perfect shadow definition throughout the stage in any lighting configuration. There is wonderful contrast as you see images starkly against the bright and colorful lights of the stage.

The DTS-HD Master Audio 5.1 is better than the LPCM stereo track included as well. This mix isn’t always the greatest. The cellos are often buried. That’s a source issue. What you get here is dynamic audio that brings the music to life as well as, or better than, any CD you’ve got in your collection. Elton speaks rather softly between the songs, but you can hear him clearly enough.

Live in Kiev: (20:36) This extra concert footage is from an outside arena with a huge crowd. You can watch it through play all or select the individual songs. The songs provided here are: Candle In The Wind, Sacrifice, Sad Songs (Say So Much) and Don’t Let The Sun Go Down On Me.

Making Of The Million Dollar Piano: (23:03) This is actually the making of the instrument and not the release. We hear from the tech geeks and Elton himself about the process of picking and then creating this piano.

Elton John is more intimate with this audience than he usually is in concert. At times I found him absolutely mellow in his interactions. He appears to be reflecting on his career, and I’m sure it makes the audience feel closer. Again, I’m not sure you get that so much on video no matter how high the quality. He’s even slowed down songs like The Bitch Is Back. It’s one of the better concert videos I’ve had the chance to review here at Upcomingdiscs. Will I ever see one better? “I think it’s gonna be a long, long time.”

Gino Sassani is a member of the Southeastern Film Critic's Association (SEFCA). He is a film and television critic based in Tampa, Florida. He's also the Senior Editor here at Upcomingdiscs. Gino started reviewing films in the early 1990's as a segment of his local television show Focus. He's an award-winning recording artist for Omega Records. Gino is currently working on his 8th album Merchants & Mercenaries. Gino took over Upcomingdiscs Dec 1, 2008. He works out of a home theater he calls The Reel World. Favorite films: The Godfather, The Godfather Part II, The Body Snatcher (Val Lewton film with Karloff and Lugosi, not the pod people film), Unforgiven, Gladiator, The Lion King, Jaws, Son Of Frankenstein, The Good, The Bad And The Ugly, and Monsters, Inc.
Watermark (Blu-ray) Infliction