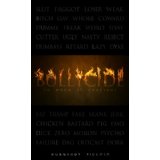 Join me as we welcome Normandy D. Piccolo to the Upcomingdiscs family.

Normandy’s an experienced writer, to be sure. She’s the author of Bullycide: To Whom It Concerns  as well as many magazine articles, ads for country music stars, children’s books and television cartoons. We’re excited to have her share her talents with us. We look forward to a lot of reviews in the future. Be sure to follow her work here. Let her know how she’s doing in the comments section. I know she’ll be happy to hear from you.

Gino Sassani is a member of the Southeastern Film Critic's Association (SEFCA). He is a film and television critic based in Tampa, Florida. He's also the Senior Editor here at Upcomingdiscs. Gino started reviewing films in the early 1990's as a segment of his local television show Focus. He's an award-winning recording artist for Omega Records. Gino is currently working on his 8th album Merchants & Mercenaries. Gino took over Upcomingdiscs Dec 1, 2008. He works out of a home theater he calls The Reel World. Favorite films: The Godfather, The Godfather Part II, The Body Snatcher (Val Lewton film with Karloff and Lugosi, not the pod people film), Unforgiven, Gladiator, The Lion King, Jaws, Son Of Frankenstein, The Good, The Bad And The Ugly, and Monsters, Inc.
No Clue Dawn of the Planet of the Apes