How It All Began: Origins of Master Mantak Chia 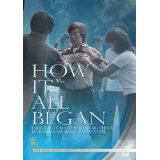 “We are that which we are really seeking.”

Back in the early 80‘s, Grandmaster Mantak Chia stepped outside of traditional Chinese rule and shared a very guarded secret with the world. The Universal Healing Tao System. Where the body, soul and spirit learn to live in balance and harmony with the universe through an understanding of energy. On the DVD, How It All Began: Origins of Master Mantak Chia’s Universal Healing Tao System, Grandmaster Chia teaches you how to keep energy flowing in a positive direction to ensure better health both physically and emotionally throughout your life.

Grandmaster Chia offers a brief history of his life at the beginning of the DVD. Due to his strong accent, I had to use the English subtitle option to better understand what was being said. I wanted to ensure I did not miss one thing spoken by this very wise, very giving man. As I watched the DVD, I soon discovered through interviews with prior students and instructors, that I am not the only one who has struggled to understand him when he speaks. Big bonus points to Way of the Arrow Media for including the subtitle option. In my opinion there is nothing more frustrating than having to keep hitting the rewind button to understand something being spoken. Subtitles take the frustration away, thus making for a more pleasant, relaxing viewing. The purpose of the DVD is to learn how to be harmonious, relax and find peace. Can’t do that with constant pause, rewind play– pause, rewind, play activity. So again, “Thank you” for including the subtitle option.

Another aspect that was intriguing was how Grandmaster Chia’s family practiced Christianity. Despite being well versed in Chinese culture and Christianity, Grandmaster Chia manages to teach about the universal healing Tao system without incorporating religion into it, which, I suppose, is a good thing to help people avoid snubbing the DVD out of fear Jesus or Buddha might pop up in the film and give them a talking-to. You learn in the bonus section how bad energy is viewed as “sin”. I found that very interesting, considering what I was raised to believe as being sin. But I digress.

Grandmaster Chia began his teachings in Chinatown (New York City) concentrating only on the Chinese people. He often worked with Dr. Lawrence Young, who would refer patients for additional spirit/soul treatment. His students, and still many today, can be seen practicing the techniques in Columbus Park in the heart of Chinatown.

Keep in mind, Grandmaster Chia began teaching back in the early 1980’s – a time when there was no internet to get the word out. His vast knowledge and skills on the topic of Chi and Tao were passed along by word of mouth and the occasional small advertisement placed at the back of a health magazine or other media piece. He became popular not long after beginning to teach. People began traveling from all over the world to seek his teachings. I am truly amazed at the dedication, love and respect those people showed for Grandmaster Chia, often selling what they had in order to come over to the United States for one of his workshops.

The DVD is filled with many interview clips of past instructors and students who rave about Grandmaster Chia and his teachings. Sometimes the way they spoke kind of reminded me of the whole peace and love vibe generated back in the 60’s. Don’t get me wrong, it’s not a bad thing. Not at all. In fact, it’s quite refreshing. But being a part of the newer “Me Me Me” generation, it’s hard to relate to all of that peace, love and giving of self that comes along with Grandmaster Chia’s teachings. Further knowledge of his teachings can be obtained through various books he wrote. Several of the books are discussed in the DVD, with the one about spiritual sex being the most popular. Big shock there (insert boring eye roll). Sex sells, so they say. I personally found some of his other books much for fascinating.

The DVD is peppered with pictures of Grandmaster Chia’s workshops over the years. You get to see people performing the moves he taught, in addition to many shots of the people hanging out and bonding. Sharing is a big part of connecting. I could not help but notice the glowing smiles in almost every photo. The people looked truly peaceful. I really enjoyed the music that was played during the pictorial viewings. It was relaxing and fit the topic of the DVD. At the end of the film, the viewer is shown current photos and video of some behind the scenes folks who helped but the DVD together. There are a few outtakes too, and lots of laughter and smiles, showing the positive energy flow taught by Grandmaster Chia. It appears to grow on those who encounter it.

Because I have never practiced Grandmaster Chia’s teachings, I struggled to understand this great peace everyone kept talking about achieving – this positive energy that starts at the navel and burns upward within you. He says, “Happiness is the key to good health.” No doubt. It’s a no-brainer that if you are happy, odds are your health is good. The two appear to go hand in hand. If you feel like crap, guess what? You are not going to be happy. You will be full of negative energy such as anger, fear, disappointment and frustration.

Grandmaster Chia tells his students to fall in love with their body. I’m not sure if most can accomplish this nowadays with so many negative self-image feelings due to unrealistic Hollywood expectations, airbrushed anorexic models who need to eat a few Happy Meals, and everyday bullies who do nothing but criticize and bring people down. It will take a strong person to stand tall and rise above all of that negative stuff and apply Grandmaster Chia’s teachings.

His teachings, per a former student, Marie Favorito, focus on; Centering, Guidance, Path Enlightenment, Tai-Chi, Buddha Palm, Chi King, Tai Chi Fast Form, Tai Chi Slow Form, Tai Chi Long Form, the Microcosmic Orbit, Healing, Martial Arts, Taoism the Philosophy, and Meditation. Per Grandmaster Chia, “If you do it, you get it.” I suppose I am going to have to do it in order to fully appreciate his teachings.

One of Grandmaster Chia’s board members, Ron Diana, who has since passed on to his next life once said, “Be like a weed, not a hothouse flower, because a weed can grow anywhere. Good health helps you to transform.”  What I take away from Mr. Diana’s quote and Grandmaster Chia’s teachings on this DVD is pretty simple. Avoid the weed killer – and I don’t mean like ‘Roundup’. I’m talking about negative energy. Focus on the good things in life, the positive energy. Live.

Included are clips from two different shows. I really enjoyed viewing both clips, because Grandmaster Chia spoke directly about his teachings, even offering up examples like: we should mediate for up to 20 minutes a day to help conserve energy so we have it to combat bad energy if/when it arrives. He teaches how to get energy to flow in a circle, about the brain being the boss of your body and how important it is to eat healthy and take care of yourself. Grandmaster Chia says, “Nobody can take care of your body, spirit and soul, but you.” He is right. You are responsible for you – no one else. He touches a little bit on the water structure. I wish he had been allowed to elaborate more on this particular topic, because it was quite interesting.

Talk About Healing: A show hosted by Jamee Culbertson on June 18, 2010 starring Grandmaster Mantak Chia. Approximately 30 minutes long. Ms. Culbertson still participates in the area of Chi. More information on her teachings are available at www.jameec.com

Ultimate Stretch: a show hosted by Raven Merle starring Grandmaster Mantak Chia. Approximately 16 minutes long. Ms. Merle is a contortionist – how they bend in those wild positions I will never know – wow! Unfortunately I found very little additional information about her with regards to continuing the practice or teachings of Chi.