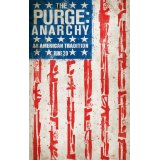 What a difference a year makes. It was just last summer that The Purge came out of nowhere to become an unexpected smash. The film piqued my interest with a killer marketing campaign that smartly sold its outrageous concept: for one night out of the year, any and all crime is legal in the U.S. Unfortunately, the filmmakers squandered that novel idea by making the most cliched, claustrophobic thriller imaginable. A little more than a year later, this follow-up arrives under considerably different circumstances. Instead of canny summer counter-programming, The Purge: Anarchy is the latest sequel in a summer that seems particularly heavy on franchise films.

“What about you? What were you doing outside?”

More importantly, my guard was up this time. The first Purge made back its $3 million production budget tenfold during its first few days of release thanks to a $34 million opening weekend. So what’s the downside of having such a massive start? The high number of people who rushed out to see the film quickly realized it had almost completely wasted its provocative conceit. Writer/director James DeMonaco had imagined an entire near-future American society yet inexplicably decided to confine the action in his film to a single house. The movie sank like a stone after its stellar opening — including a massive 76 percent second-weekend drop — which suggests I wasn’t the only one who felt duped. Of course, the fact that The Purge was nevertheless hugely profitable meant DeMonaco got a do-over. I definitely wouldn’t say he fixed everything that was wrong with the first movie, but the sequel represents a step in the right direction.

Anarchy is set one year after the events of the first film. It’s a few hours before Purge Day 2023, and the movie introduces three separate story lines involving hard-luck characters. There’s diner waitress Eva (Carmen Ejogo), who doesn’t make nearly enough money to support her daughter Cali (Zoe Soul) and ailing dad (John Beasley); we also meet bickering young married couple Shane (Zach Gilford) and Liz (Kiele Sanchez), who seem to be at a turning point in their relationship; finally, there’s “Sergeant” (Frank Grillo) who is grimly gearing up and getting ready to hit the streets for an unspecified mission. Through a series of events that aren’t quite as contrived as they seem in the trailer (see below), their paths end up converging and the group finds itself in a desperate fight for survival.

Despite my disappointment with the first Purge, I was cautiously optimistic about the sequel because it seemed to represent a 180-degree turn from its predecessor. Instead of restricting the action to a single setting — a trademark of the most profitable Blumhouse Productions movies, which include the Paranormal Activity franchise — Anarchy takes advantage of its wide open, urban setting. (A title card at the beginning lets us know Anarchy is set in “America 2023,” which allows the city in the movie to stand in for almost any foreboding metropolis.) In fact, if you squint during the middle portion of this sequel, you’ll see bits of Walter Hill’s The Warriors as our heroes struggle to survive a relentless gauntlet of oddly colorful gangs. (Anarchy also reminded me of Judgment Night, the underrated 1993 thriller about a group of friends who try to take a shortcut through the bad part of town and wind up fighting for their lives in an urban hellscape.)

The other notable difference with Anarchy can be found in who our “heroes” are. The first film was told from the perspective of well-to-do characters — not quite “one-percenters”; call them “five or ten-percenters” — behaving badly. It also only hinted at the idea that The Purge was secretly a way to cut away the lower rungs of society. Anarchy, on the other hand, pushes that notion front and center. We’ve been led to believe the Purge has led to record low rates in crime and unemployment because people can work out their frustrations over the course of this manic 12-hour period. The sequel suggests a simpler explanation: the poor, frustrated people have mostly wiped each other out during each Purge. (The great Michael K. Williams pops up as a rabble-rouser intent on exposing the true agenda of America’s New Founding Fathers.)

Unfortunately, DeMonaco still can’t manage to avoid reverting to the cliches of whatever genre he’s working within. Whereas the first Purge was an uninspired home invasion flick that methodically hit every horror movie beat in the book, Anarchy is an action thriller that seems no less obsessed with revisiting overly familiar tropes. For example, Sergeant’s motivations for taking part in the Purge are painfully clear from the start, so I’m not really sure why the director teased and dragged out the revelation for so long. I didn’t mind the main group becoming something of a fractured family, but watching the grizzled Sergeant connect with Cali — or watching the estranged Shane and Liz become bonded together once again — didn’t exactly capture my imagination.

DeMonaco does come up with some unsettling bits, including an insane interlude at what’s supposed to be a safe haven. But the overall lack of inventiveness and nuance undercuts the film’s attempts at satire and social commentary. In Anarchy, it’s not enough to show a dead stockbroker strung up outside an office building; the stockbroker also has to have a sign around his neck explaining the obvious symbolism. The movie’s muddled climax does away with any pretext of symbolism and features a more overt clash between the different social classes.

Grillo — who elevated what could’ve been a generic henchman role in the last Captain America movie — makes for a credible action (anti)hero, even if he’s basically playing a poor man’s version of The Punisher. Ejogo does some decently expressive work as a mother who’ll do what it takes to survive, while Gilford and Sanchez seem to have embraced how inherently irritating their characters are. Williams has just one big scene. However, his work here feels less like an inspired performance/character and more like a cash-in on the anti-establishment capital the actor collected from his legendary character on The Wire. A key character from the first film also pops up in Anarchy, but I’m not quite sure that person’s “grand” return had the impact DeMonaco was hoping for.

All that being said, The Purge has a chance to do for the summer what the Saw and Paranormal Activity films have done for October in recent years: crank out diverting, wildly-profitable yearly installments. I’m assuming we’ll get at least another chance to Purge because this bigger, (slightly) better sequel still only cost a reported $9 million to make. I just wish DeMonaco wasn’t stuck in the same violent rut. (If *all* crime is legal, why only focus on the people who resort to murder?) I wouldn’t mind seeing the concept handed over to a different filmmaker. Although Anarchy noticeably expands on the scope of the first film, I still don’t feel like DeMonaco has come close to hitting the bullseye with his intriguing idea.

Rio 2 (Blu-ray) How It All Began: Origins of Master Mantak Chia