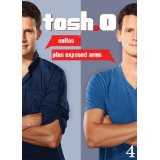 Here comes Volume four of this clip commentary comedy show (CCC could catch on as a sub-genre title couldn’t it?). This time we get two seasons worth of episodes; the “Collas” and “Exposed Arms” entitled seasons, as it were. Very little is different as far as format or new segments are concerned since the last time I wrote about this show.

YouTube had all but killed off the idea of mailing silly home videos to the likes of America’s Funniest Home Videos. These days, people prefer to stream dozens of videos on their computers and save themselves from the watered down jokes of Bob Saget or current host Tom Bergeron. Tosh.O  takes a similar format of displaying such silly videos, but focuses on things that have gone “viral” online. Like AFHV, Tosh.O adds their own commentary and sketches to the presentation but in a much more crass, cable-savvy manner.

Daniel Tosh makes for a very suitable host, which makes the difference to those who may consider aimlessly surfing through YouTube’s channels to be a more valuable way of taking in the latest in mind-numbing entertainment. Tosh not only is capable at delivering edgy quips but often places himself at the butt of self-deprecating and/or harmful sketches where he may partake in the same idiocy he seems to be lambasting at other points in the episodes. There are some moments here and there where his tangents get a bit self-indulgent when he starts making very specific references to celebrities and athletes. If you aren’t familiar with the person he is speaking about, the jokes are a bit flat and kill the show’s momentum.

The “Is it Racist?” segment is still around and has been coupled with an even more offensive segment called “Are they Retarded?” This type of segment helps to maintain the status quo of viewers who are becoming all the more validated with their casual online cruelty that they can safely spew in the comments section of the very online videos Tosh.O is regurgitating here. This show is literally asking its viewers to discuss just how cruel they should be towards people who have been placed online.

One of the most intriguing recurring sketches is “Web Redemption” where they track down the star (or victim) of a popular clip and give them the opportunity to explain said clip as well as recreate the situation in order to avoid their popular blunder (these clips often have views calculated in the multiples millions). It is often all too clear that these people are famous for an accident, and not their charm or skill.

Widescreen 1.78:1. The transfer to Blu Ray is nicer looking than it was in the first season, but HD clarity is still the enemy of a show that uses 100% green screen for a set. The background (as digitally inserted as it is) can look a bit cheap.

Extended  Redemption  Interviews: Tosh asks a lot of questions, many of them are rhetorical jokes that get laughter instead of a worthwhile response.

The Uncut Tiptoes Spoiler: This is similar to the  Human Centipede  spoiler Tosh did in the last release. Shorter though.

I’m becoming increasingly jaded about these types of programs. As mentioned before, things like the “Are they Retarded?” segment are only helping to perpetuate the idea that being smug and cruel through the safe, anonymous distance of TV and the internet is very much acceptable. This is incredibly unhealthy, especially for young people, who are not seeing the results of their cruelties…only rewards in the form of  Tosh.O  style entertainment.
Ever-smug Tosh takes a high horse stance against internet celebs and reality TV personalities and yet he is just as guilty as they for standing amidst a sea of hacky accidents and unscripted, lowest common denominator banter and reaping a fortune for it. A part of me thinks shows like  Tosh.O  and The Soup should not be making money from their clips, but paying their creators (if they do not already) and simply thanking the stars that the viewing public has lowered its expectations for what is being presented as “entertainment” these days.

How It All Began: Origins of Master Mantak Chia Anaconda (Blu-ray)