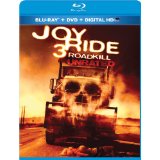 Once again I caught up with director Declan O’Brien. We talked with him after he had finished Wrong Turn 4. We reviewed Wrong Turn 5 where Declan continued to impress. He is one of the best when it comes to dealing with budgets. He makes sure every cent is on the screen. He did it again with Joy Ride 3. Yet another franchise saved. Most car crash films spend more on one stunt than Declan had for the entire film. Yet, he delivered again. Sit in with my latest talk with Declan O’Brien. Bang it here to join the conversation: Declan O’Brien

Gino Sassani is a member of the Southeastern Film Critic's Association (SEFCA). He is a film and television critic based in Tampa, Florida. He's also the Senior Editor here at Upcomingdiscs. Gino started reviewing films in the early 1990's as a segment of his local television show Focus. He's an award-winning recording artist for Omega Records. Gino is currently working on his 8th album Merchants & Mercenaries. Gino took over Upcomingdiscs Dec 1, 2008. He works out of a home theater he calls The Reel World. Favorite films: The Godfather, The Godfather Part II, The Body Snatcher (Val Lewton film with Karloff and Lugosi, not the pod people film), Unforgiven, Gladiator, The Lion King, Jaws, Son Of Frankenstein, The Good, The Bad And The Ugly, and Monsters, Inc.
Last Action Hero (Blu-ray) Donnie Brasco (Theatrical Cut) (Blu-ray)