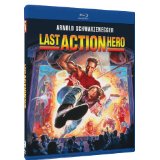 “Let me know when the governor gets here.”

Well, he’s in the house, and I’m going to get a lot of razzing for this review of Last Action Hero. The person who thought I should see a shrink for looking forward to the next Saw film is going to be calling for my outright commitment to an institution dedicated to covering walls with nice padding so we won’t hurt ourselves. I know this film is generally considered “bad” by critics and moviegoers alike. It swept the Razzies in 1993 and has since been only the kind of film 10-year-olds would really like to see. Me, I’ve always simply loved this film. From the first time I saw it at the box office, I was hooked. It was one of the first new laserdiscs I bought back in the day, and I watched the heck out of that disc. I’m not ashamed to admit it. I love this movie.

So, why is this movie so hated? Honestly, I don’t think that it is. I think many of you will buy this one along with a lot of other items in the hope the checkout guy doesn’t notice it. You know what I’m talking about, don’t you? You’ll place it front down on the counter and look slightly away when the disc is scanned. You’ll mumble something about how you hope your cousin will like the birthday present, or damn that fraternity for forcing you to watch this crap. Inside, deep inside, you can’t wait to rip that sucker open and kick back for two hours of non-stop entertainment.

And that’s what this is. It’s a great popcorn film. I didn’t say great film. Critics complain about this as if it were an honest attempt at a straight action film. It’s directed by John McTierman, and I think after Die Hard, Predator, and The Hunt For Red October we can safely assume that McTierman knows how to make a solid action film. This is a spoof of an action film. It’s supposed to be over-the-top. It’s supposed to be clichéd. Did you think that an animated tiger was part of a straight action film? Credit Arnold Schwarzenegger for being willing to make fun of himself like this. I mean come on, people. Did you really not get it?

Danny (Madigan) is a lonely kid. He’s being cared for by a single mom who has to work all the time. He doesn’t appear to have any friends, except for Nick (Prosky). Nick is the projectionist at a local run-down movie house. Danny escapes in these films and spends a lot of time there. He’s particularly fond of the Jack Slater film series. Arnold Schwarzenegger stars as Slater, a tough cop who lives in a Lethal Weapon kind of franchise. Danny loves to watch him rip through the bad guys and the scenery, literally.

One night Nick asks him to come back at midnight for a private screening of the latest Slater film: Jack Slater IV. As he enters the theater, Nick gives him a golden ticket he got out of a chocolate bar wrapper. Oops, wrong story. He got it from Houdini himself when Nick was just a young kid. Houdini promised that the ticket was magic, but Nick never had the courage to use it. But the ticket is magic, and as Danny watches the film unfold he suddenly finds himself in the back of Slater’s car during a high-octane car chase.

For the first half of the film Danny works with Slater to help solve his latest crime, while trying to convince him that it’s all a movie and Jack is just a character. Danny’s able to finger Jack’s betrayer because he’s played by F. Murray Abraham, and he killed Mozart (referring to Abraham’s stint in the film Amadeus) When the bad guy gets the ticket, however, the action moves into the real world, and now Jack must deal with the fact that stuff actually hurts and guns actually run out of bullets.

Seriously, how can you not have a blast with this film? Almost every scene is filled with about every action film cliché you know. Watching Jack Slater get angry with Arnie is an absolute blast. How many actors would make fun of themselves like this? I’ll bet not many. If you give it half a chance, you’ll find the film is just loaded with both obvious and quite subtle touches. I still see something new each time I watch it.

The cast gets it. They are having the time of their lives. Frank McRae is great as the typical shouting commanding officer who really has a bond with Slater. Prosky slipped his Hill Street Blues uniform for a truly magical, albeit short, performance here. Of course, today there would be more concern if an old man liked to hang out with a young boy in a crappy theater. How unfortunate for us. Tom Noonan, who I just saw in a supporting role on Damages, plays Slater’s arch-nemesis The Ripper, and of course, himself. Ian McKellen has one of his first roles in a major film as Death. Danny DeVito voices the animated tiger detective. Watch this film and I dare you not to crack a smile.

This version has a great price. Otherwise it’s not a stellar release of this underrated gem.

The Last Action Hero is presented in its original aspect ratio of 2.40:1. The 1080p image is arrived at with an AVC/MPEG-4 codec at an exceptional 25 mbps. The image has a lower bit rate than the Sony Blu-ray, and it does show a bit of surface noise. As for the production design, when you are in the reel world of Jack Slater, everything is cartoon- and comic-book-bright. In the real world of Danny’s New York, everything is drab and dark. Still, detail comes alive somewhat here. Black levels are not bad. This film never looked so good.

The Dolby Digital 5.1 is a bit of a disappointment. Subs don’t really have the dynamic explosive effect I recall. Dialog is fine and the audio works, but it doesn’t compare to the uncompressed track of the earlier release.

I was rather taken with some of the new accidental humor that the film now processes. With Arnie playing his biggest role ever as the Governator, there are a few political jokes that play a whole new way now. Seriously, I’ve taken a lot of heat from friends over the years for my love of this film. For me, watching movies is a passion as much as a business. It’s so easy for people in my place to become jaded or overtaken by the rigors of the business angle that many critics have forgotten how to truly enjoy watching a film. We’re afraid of actually being too entertained because we fear it might dull our sharp knives. Critics often resist turning to their inner child so that we might marvel, if only for a couple of hours, in someone else’s fantasy. Watching The Last Action Hero again has reminded me of why I love watching movies so much. It connected me with that little boy who, like Danny, used to escape into a silver screen at a local rundown movie house. For me it was The Majestic in Reading, Pennsylvania. But it might as well have been anywhere … any time. Movies are such a big business today. Careers and even the future of entire studios are often on the line. So everyone takes it all so seriously that we all forget why we wanted to be a part of it in the first place. “Big mistake.“

Gino Sassani is a member of the Southeastern Film Critic's Association (SEFCA). He is a film and television critic based in Tampa, Florida. He's also the Senior Editor here at Upcomingdiscs. Gino started reviewing films in the early 1990's as a segment of his local television show Focus. He's an award-winning recording artist for Omega Records. Gino is currently working on his 8th album Merchants & Mercenaries. Gino took over Upcomingdiscs Dec 1, 2008. He works out of a home theater he calls The Reel World. Favorite films: The Godfather, The Godfather Part II, The Body Snatcher (Val Lewton film with Karloff and Lugosi, not the pod people film), Unforgiven, Gladiator, The Lion King, Jaws, Son Of Frankenstein, The Good, The Bad And The Ugly, and Monsters, Inc.
Antboy Exclusive Interview With Declan O’Brien – Director Of Joy Ride 3