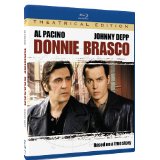 Pacino and Depp in a mob drama about an undercover fed and his unknowing Mafioso mentor? Fuggedaboudit. Donnie Brasco is based on the true story of F.B.I. agent Joe Pistone (Johnny Depp, Blow), who spent six successful years undercover in the New York Mafia, as one Donnie Brasco. The film opens with Lefty Ruggiero (Al Pacino, Heat), an aging made man, connecting with Donnie about a diamond ring. Donnie’s cover is he’s in the jewelry “business”, and Lefty wants to unload a ring some guy …gave him as payment for a debt. When Donnie insists the ring’s a fake, Lefty goes back to see the guy, bringing Donnie along. The guy still claims it’s the real deal, but Donnie asks for a minute to “talk to him.” Permission from Lefty granted, Donnie smacks the guy around, threatens murder and makes the guy give up the keys to his Porsche.

So starts a tight relationship, between made guy Lefty and Donnie, his connected underling and chosen pupil. Lefty, a killer with 26 hits under his belt, eventually vouches for Donnie to his bosses – a big move, because it means he’s responsible for Donnie. If something goes wrong – like Donnie turning out to be a cop – the mob veteran will die with his protégé. With Lefty standing up for him, Donnie is allowed into the fold of a mafia crew led by Sonny Black (Michael Madsen, Kill Bill), a violent, ambitious leader.

The crew hits the big time when Sonny becomes a boss, but Lefty resents that promotion, admitting to Donnie he feels passed over. Still, the crew stays together, working to beat out a rival boss, all while Donnie continues to collect evidence and file reports on their activities. As the years pass, the stress of undercover work takes a toll on Donnie. His marriage falls apart, and after a double-cross, Sonny’s crew is suspicious of a possible mole in the organization. By this time, Pistone is so deep undercover he feels more like Donnie than his true self, and when his superiors want to pull him out he resists, because he knows if he gets out his friend and mentor, Lefty, is doomed.

Donnie Brasco is an intelligent character drama, and it succeeds thanks to the excellent performances by Pacino and Depp. Pacino has done way more than his share of mobster films, from The Godfather to Carlito’s Way, but he’s especially good here because Lefty is an entirely different type of character. Instead of a charismatic mastermind, he’s a sad-sack never-was. Pacino plays Lefty in such an understated, nuanced way, you’ll stare at the screen wondering how it could be the same guy who ruled every room in Scarface. Depp is just as good, creating a lot of depth for his character as he struggles with the undercover life, his non-existent life with his family, and the final dilemma of having Lefty’s fate in his hands. Donnie’s wife, played by Anne Heche (Birth), deserves an honorable mention, as while she has little screen time, her moments are very strong, with complexity of emotion.

If you look at the story, though, the script is very much a rehashing of various mob themes we’ve seen time and again in American cinema. Many of the characters fill cliché roles we all expect to see in gangster films, so without the powerhouse acting led by the two leading men, Donnie Brasco would just be a solid example of an overdone genre.

Donnie Brasco is presented in its original aspect ratio of 2.40:1. The 1080p image is arrived at with an AVC MPEG-4 codec at an average 20 mbps. The bit rate is low here; after all, this is a budget Blu-ray. Still, the high-definition image presentation manages to deliver some fine detail at times. While the image gets a little muddled in the blacks, the brightly lit material comes out quite sharp with some nice detail.

The Dolby Digital 5.1 is actually better than I expected from the pretty much DVD-quality audio. The surrounds are pleasantly alive with sounds of traffic and also with the period musical cues. Dialog works. There’s absolutely not much happening in the sub department.

It has been a while since we had a chance to see the theatrical cut. This is the way we saw it in the movies so many years ago. While I have grown to like the extended version, I find that this one has a place on my video shelf and will remain there.

Other writers in our Archive Author section contributed parts of this review.

Gino Sassani is a member of the Southeastern Film Critic's Association (SEFCA). He is a film and television critic based in Tampa, Florida. He's also the Senior Editor here at Upcomingdiscs. Gino started reviewing films in the early 1990's as a segment of his local television show Focus. He's an award-winning recording artist for Omega Records. Gino is currently working on his 8th album Merchants & Mercenaries. Gino took over Upcomingdiscs Dec 1, 2008. He works out of a home theater he calls The Reel World. Favorite films: The Godfather, The Godfather Part II, The Body Snatcher (Val Lewton film with Karloff and Lugosi, not the pod people film), Unforgiven, Gladiator, The Lion King, Jaws, Son Of Frankenstein, The Good, The Bad And The Ugly, and Monsters, Inc.
Exclusive Interview With Declan O’Brien – Director Of Joy Ride 3 Transcendence (Blu-ray)