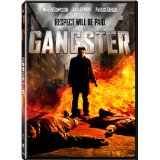 When I first picked up this title to review it was a film I knew nothing about other than what the DVD cover revealed, which as it turns out was very little.  I like going into most films cold so there is no room for expectations to get in the way.  With such a generic title and a cast that had a few names that rang a bell and knowing nothing about the story, I figured the film had equal chances to be good or simply a stinker I’d forget by the weekend.  As it turns out, Gangster is a gritty little drama that not so much took me by surprise but instead left me wanting so much more.

Paul Ferris (Martin Compston) had it rough as a kid, always the target of bullies, while also developing a quiet admiration for the local Glasgow crime boss.  Witnessing an execution before even turning a teenager, it shouldn’t come as a surprise that this admiration would soon develop into emulation towards the bullies in his neighborhood.

Gangster starts out by jumping back and forward in time as Ferris is in custody for some crimes he’s committed to him thinking back to the events that got him to where he is.  The attempt I’m sure was meant to be more profound than the outcome we actually see in the film, but what it more or less does is try to convince us that Ferris is nothing more than a victim of circumstance.  This is a bit of a hard sell considering that as the film plays out we see Ferris taking part in some truly violent and despicable acts as he works his way up the crime ladder.

As Ferris continues his climb through the ranks, Junior Thompson (Stephen McCole) begins to notice that his father seems to be taking more of a shine to Ferris than to his own son.  It’s hard to believe Thompson ever had a chance to lead any crime syndicate considering he seems to be always snorting coke as well as emulating The Godfather rather than his father, who after all is a “real” crime boss.  The over-the-top performance left me recalling Pacino’s performance of Tony Montana, not so much as a great performance but instead just simply over-the-top.

Compston, however, seems to take his performance in stride.  There is a lot of range put on display throughout the film, but yet I had a hard time believing Ferris could ever be considered threatening.  Perhaps that’s simply how Compston interpreted the role, seeing that Ferris really was nothing more than a victim of circumstance.

Where the film takes a fun and most interesting turn is when we see Thompson set in motion his plan to remove Ferris from the equation.  It’s a move that comes as no surprise, and for those in the UK familiar with the true events, this most likely was the moment many viewers were looking forward to seeing.  Unaware that this was a true story to begin with, I can’t say with any certainty how accurate any of the film is, but it plays out as most typical films do: everyone always seems to begin with best intentions, but the lifestyle has a way of changing everyone no matter how hard they struggle with the change.

As for the execution of the film, it all feels as though this is a film that took the “true” events and simply followed the stereotypical crime story blueprint to pull a script together.  There are some lofty attempts by the director to give viewers a hard-hitting crime drama; the problem is the presentation has been done before and allows no surprises for the audience.

Brent Lorentson is a horror writer and film critic based out of Tampa, Florida. With a BA in Digital Film, he co-wrote and co-directed Scavenger Hunt. His short stories have appeared in various horror anthologies. In 2019 his short script Fertile Blood will be a part of the anthology horror film Slumber Party. He is currently working on his first novel A Dark and Secret Place set to be released in late 2019. Favorite Films: Taxi Driver, Fight Club, I Saw the Devil, The Wild Bunch, Dawn of the Dead, A Clockwork Orange, Pulp Fiction, Heathers, The Monster Squad, and High Fidelity.
Cesar Chavez (Blu-ray) Aerial America: Southwest Collection (Blu-ray)