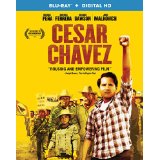 The fact that we haven’t gotten a movie about Cesar Chavez until now is both surprising and not all that shocking. It’s surprising because the Mexican American labor leader was arguably as big of a civil rights icon to Latino workers as Martin Luther King, Jr. was to the country’s black community in the 1960s. On the other hand, the extended wait for a Chavez movie isn’t all that shocking when you consider his efforts took place in the largely un-cinematic realm of grape boycotts. The bland, well-meaning Cesar Chavez makes the case for his impactful deeds, even if it doesn’t totally present him as a vibrant, complex man worthy of the biopic treatment.

The film opens with Chavez (Michael Pena) explaining his life story to an unseen interviewer; so he’s really addressing us in the audience. He talks about being born in Yuma, Ariz., and his family losing its farm during the Great Depression. They subsequently migrated to California, where Cesar began working the fields at age 11. (Farmworkers had been excluded from the National Labor Relations Act, which had been enacted in 1936.) This sort of “tell-don’t-show” sequence is not what you’d typically want to see out of a movie. But here it’s a brisk way of running through the early part of Chavez’s life and sharpening the film’s focus.

“I want to get my hands dirty.”

The majority of Cesar Chavez takes place between 1962 and 1970. In 1962, Chavez wanted to do more hands-on work than his Community Service Organization allowed. So he moved his wife Helen (America Ferrera) and eight kids (though only surly son Fernando, played by Eli Vargas, gets any significant screen time) to the agricultural hub of Delano, Calif. Cesar and Helen began working the fields and encouraging workers to make a non-violent stand for higher wages and better treatment. Throughout the rest of the decade, he amassed a massive following of farmworkers and supporters like Sen. Robert Kennedy (Jack Holmes, doing a dodgy, mercifully-brief impersonation). Chavez’s efforts culminated with 1965’s Delano Grape Strike, which lasted more than five years and pitted the farmworkers against a cadre of dastardly growers led by Bogdanovich Sr. (a fantastically be-wigged John Malkovich).

Cesar Chavez is directed by Diego Luna, who is best known for his roles in films like Y Tu Mama Tambien and Milk. As a director, Luna largely favors an intimate style of filming that succeeds in making this struggle feel personal. Unfortunately, those sensitive touches are totally undone by heavy-handed sequences like the one that juxtaposes Richard Nixon’s presidential inauguration with a sequence of farmworkers being violently rounded up.

In addition to Luna, the film counts Malkovich and Luna’s Y Tu Mama co-star Gael Garcia Bernal as its producers. So it’s no surprise the project was able to attract some well-known names to play unglamorous, relatively minor parts. Wes Bentley (American Beauty) pops in as a shaggy lawyer, but we barely get to see him argue a case. More notably, Rosario Dawson co-stars as Dolores Huerta, Chavez’s co-founder with the National Farm Worker’s Association. Except you’d never know it from watching this film, which largely casts Huerta in the role of dutiful #2. I realize the movie isn’t called Cesar and Dolores. But if this film was always intended as the sort of one-man showcase it turned out to be, I wish that one man had been presented more dynamically.

This movie is a long overdue star turn for Pena, a talented, reliable performer who has improved pretty much everything he’s ever appeared in. Here, he’s got the assured charisma to stand in front of a crowd and easily command the room during one of Chavez’s community rallies. It’s a good thing too because Cesar Chavez isn’t exactly crammed with memorable, chill-inducing speeches you’re going to be looking up on YouTube. That’s a minor complaint, though: the bigger problem is Pena simply isn’t given anything interesting to play. The only actor who offers a real spark is Malkovich, whose Croatian character represents a different breed of entitled immigrant.

Obviously, Cesar Chavez is sympathetic to its subject, but I felt like Keir Pearson’s script left a good amount of dramatic potential on the table. Chavez isn’t quite presented as a saint, but even his “faults” — most notably, neglecting Fernando — can be chalked up to his commitment to a higher cause. (That commitment is exemplified by Chavez’s 25-day hunger strike in 1968.) Earlier, there’s a brief scene where Cesar gets jealous after hearing that Helen met another impassioned farmworker during a night in jail, but that intriguing moment is gone in a flash. It’s a shame because it’s one the few moments where Chavez seems more like a man and less like a symbol.

Cesar Chavez is presented in an aspect ratio of 2.40:1. The 1080p image is arrived at with an AVC MPEG-4 codec at an average of 23 mbps. The visual presentation is largely as unassuming and workmanlike as the heroes of the film. Luna sprinkles in a fair bit of soft-looking B&W archival footage, which makes the solid, unspectacular baseline image look a little better than it probably is. Despite the fact that color levels (intentionally) appear to be more overcast and muted than you’d expect from the outdoor scenes — as if to say the backbreaking farm work is anything but sunny — there are a few moments of panoramic beauty. (Cesar Chavez was filmed in Mexico.) It’s not a razor sharp image, but the grain on display — which presents as perpetual dustiness here — is true to both the material and the project’s low-budget origins.

The DTS-HD Master Audio 5.1 track is mostly here to serve the dialogue, a significant amount of which is in Spanish. (The Lionsgate Blu-ray offers subtitles that pop up only during the Spanish-language bits, in addition to more traditional English subtitles.) The lion’s share of the action is confined to the front speakers. There are sporadic bursts of activity from the rears — most notably during a conflict at a Filipino Work Camp — but they are largely used to amplify the gentle score by Michael Brook. The relative lack of immersion feels like something of a missed opportunity, given the lively community rally scenes and the many sequences that take place outdoors.

The Making of Cesar Chavez: (19:05) This is a fairly standard “Making of,” even if everyone’s enthusiasm for the project seems more like a genuine sentiment and less like a platitude. Luna talks about using the story of the Delano Grape Strike as a vessel for telling the story of who Cesar Chavez was as a person. The director also talks about the challenges of telling such a big story about an unsexy subject with a tiny budget. Meanwhile, Pena reveals that playing Chavez was a dream come true. Presented in HD.

Given that immigration has been such a hot topic recently, Cesar Chavez had a chance to be uncommonly timely. (Especially when you consider its subject died in 1993, and the film takes place during the 1960s.)

Instead, the movie eschews any sort of thoughtful exploration; perhaps Chavez’s own stance on illegal immigration would have muddied the heroic waters the filmmakers had charted in their minds. Either way, the film seemed more concerned with teaching us about Chavez’s exploits and getting his admirable accomplishments on the big screen, and less concerned with being interesting. Biopics that follow this path “have this annoying habit of turning everything into a lesson.”