Posted in: No Huddle by Archive Authors on August 7th, 2014 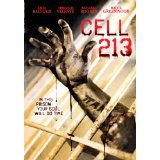 “In this prison your soul will do time.”

What’s not to love about an arrogant defense attorney being sent off to prison, where good and evil are going to battle it out for possession of his soul? Eric Balfour (24, Saving Grace, Texas Chainsaw Massacre) plays the unlucky attorney, Michael Gray, who spends his time screwing the legal system in more ways then one. He’s not exactly a choir boy. Rounding off the cast of Cell 213 are Deborah Valente (The Devil’s Mercy, Resident Evil: Apocalypse), who plays an investigator, Bruce Greenwood (St. Elsewhere, Young Justice, Endless Love), who plays the Warden, and (my favorite) Michael Rooker (The Walking Dead, Burn Notice, Psych), who plays a prison guard.

The basic schematic of Cell 213 goes something like this: poor Mr. Gray has an unfortunate encounter with a crazy client and it lands him in the slammer. The irony, right? The shyster lawyer saves others but not himself!

Every thriller has to have some feminine eye candy. Enter the investigator, who visits the prison to (surprise!) investigate the warden because prisoners are leaving via suicides and murders. No parole board outs in this flick. It’s not made very clear how the warden plays into it, if at all. Why do I say this? Because the wonderful director not only had choppy scenes that were all over the place throughout the film, but anytime the investigator was reading a document, most of it was blurred out so you, the viewer, had no clue what she was reading. It made no sense whatsoever and was extremely annoying. I get the whole, “keep ’em guessing” theory — but to “leave ’em without so much as a hint” was irritating and basic bad filming.

There were a few graphic morgue scenes thrown in for gore, some semi-cool ghost appearances (you later find out who the ghosts are), a few murders (standard in any prison movie), a morgue attendant with knowledge and a smart mouth, and a crazy guard with an imaginary wife (which by the way was never explained). Again, annoying. I mean, was she a ghost he actually saw and spoke to? Was she really his wife? If so, what happened to her?  Did she leave? Did he kill her? What made him act like a nut? Because as far as I could tell, he was never actually housed in cell 213. The writer never offered any information, which was a shame because Michael Rooker’s character had great potential to expand on the storyline of the actual cell 213 and make the film really creepy — especially with the film’s ending. Again, another “WTH?” moment.

About an hour or so in, you learn cell 213 revolves around Revelations 2:13. (“I know where you live, where Satan has his throne…”) What didn’t make sense was why cell 213 was the only one haunted in the entire prison. I mean, the prison was full of guys who did way worse than a shyster defense attorney, so why was this cell haunted? I’m sure there were other cells in the prison that matched numbered quotes from the Bible. This is what I am talking about. It doesn’t make sense.

In my opinion, it would have been better to put some more history behind this cell. Maybe revealed some past inmates who stayed there, died and were now haunting it or something…anything. The only thing that was explained in the film was the process of prepping a body for embalming. At that point, I was almost wishing I was the one laying on the metal table waiting to get tubed so I could end the misery of watching the rest of this movie.

The computer graphics were good, except for when the ghost etched words into the concrete walls. In appearance, it’s an awesome effect, but the director failed to keep the camera on the wall long enough to read it. I had to go back and pause the DVD. It’s not easy to read white etchings on white walls. A scene where Michael Gray attempts suicide was amped up by showing a very well done, computer-generated fiery pit opening up in the floor beneath him. Cool special effect. I will go one step further and say that if it weren’t for the superb acting skills of Michael Rooker and Bruce Greenwood — along with a great special effects department — this film would have fallen into the fiery pit…also known as my fireplace, where I’m certain most viewers will feel this movie belongs.

In my opinion, the only one who should be doing time in Cell 213 is the movie’s writer, Maninder Chana. It’s so disappointing. The potential to make a dynamite, scare-the-crap-out-of-you, mess-with-your-head, psychological thriller was there. Except Mr. Chana’s script left me wondering more than fearing. He was all over the place with the story. A few things eventually made some sense, but I had to get an hour plus into this almost two-hour torture chamber of a film to begin to understand it — and, even then, it still left me with a ton of unanswered questions. At least with most mystery movies, I get a clue. With Cell 213, I needed to eat a bowl of Cocoa Puffs, and you will too. Trust me, because Cell 213 will have you going cuckoo trying to patch together the sporadic storyline.