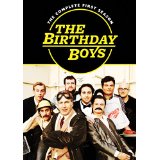 It seems to me, if your ultimate goal is to get on television, there’s never been a better time to be a sketch comedian. Thanks to sites like YouTube — which thrive on the sort of bite-size videos that line up nicely with the rhythms of sketch comedy — funny folks can hone their craft online while building a big enough fan base to maybe compel a network to offer them a show. Comedy Central is the most obvious basic cable landing spot, but IFC has emerged in recent years as a haven for offbeat humor. That includes The Birthday Boys, which is characteristically uneven, but boasts an impeccable TV sketch comedy pedigree.

“Finally, they got their golden opportunity. A television producer offered them their own show. But at what cost?”

The Boys themselves are comprised of seven names you won’t recognize (yet) unless you’re among the nerdiest of comedy nerds: Jefferson Dutton, David Ferguson, Mike Hanford, Tim Kalpakis, Matt Kowalick, Mike Mitchell, and Chris VanArtsdalen. However, they’ve been shepherded to the small screen by executive producer/co-star Bob Odenkirk, best known in comedy circles for co-creating HBO’s Mr. Show with David Cross. Before Mr. Show, Odenkirk served as a writer on Saturday Night Live, which helped lead to him being cast on cult fave The Ben Stiller Show. (The show famously won an Emmy for writing after it was canceled.) Not surprisingly, Stiller also serves as an executive producer on The Birthday Boys and even pops up to play a couple of different roles in Ep. 4/“Rock and Roll.”

To be honest, it took me a little while to warm up to this show. Like The State, there are a lot of faces to get to know early on, which is why it was smart of Odenkirk to insert himself into the show from the very beginning. Odenkirk — who has proven to be an effective dramatic actor in projects like Nebraska, FX’s excellent Fargo, and (of course) Breaking Bad — brings instant credibility and authority, even though he’s usually playing a supporting role.

More importantly, The Birthday Boys aren’t exactly the most diverse group of comics. A few stand out physically — like “the bald one” (VanArtsdalen) or “the heavier one with the beard” (Mitchell) — but the Boys are basically seven interchangeable white guys who also seem to be around the same age. I suppose you could say the same about The Kids in the Hall, but at least that quintet looked better in drag. (Although Mitchell gamely and comically gives drag a go in the “Pretty Dad” in Ep. 9/“Going All the Way.”)

You could say their interchangeability and lack of notoriety allows them to more effectively disappear into their characters. However, even the show’s more absurd concepts are largely driven by the personality of the performers. The Birthday Boys are more likely to rely on funny accents and fake facial hair than celebrity impersonations. (They wisely leave the latter to guest star Frank Caliendo in Ep. 4.) Fortunately, a few standouts do emerge. Besides Mitchell — who probably has the greatest ease in front of the camera — I really liked Kalpakis’ command and versatility in playing both the straight man and broader characters, as well as Hanford’s slackery elasticity.

I also like that The Birthday Boys takes very specific aim at its satirical targets. (The pressure to clear out your DVR; buffoonish college deans in ’80s movies.) Sketches and concepts are also given time to breathe within a single scene, and each episode includes at least one recurring jokes. Like with almost all sketch comedy shows, some gags are stretched too long — like the non-glamorous work that cowboys do — while others will have you anticipating when they’re gonna pop up again (Kalpakis pointing out what constitutes a modern family). Besides Stiller and Caliendo, notable guest stars are pretty sparse because there’s not really much room when you’re trying to incorporate up to seven people (plus Odenkirk) into a skit. So we get the likes of French Stewart and Tia Carrere playing themselves, and Criminal Minds vet Paget Brewster randomly turning up for a funny cop show parody that doesn’t give her a single thing to do.

The Birthday Boys: The Complete First Season features all 10 season 1 episodes on two discs. The special features, which can be found on Disc 2, include a “Making of,” bonus videos featuring some of the season’s characters, and promos. The best of the bunch is “From Stage to Screen,” which includes footage of the Boys performing some of the TV show’s sketches for live audiences between 2008 and 2011. (Remarkably some of the props/costumes appear to be the same.)

IFC has renewed the show for a 10-episode second season that’s scheduled to premiere later this year. I’m interested to see how involved Odenkirk will remain given that he’s set to headline his Breaking Bad spin-off, Better Call Saul. Maybe the show won’t need him on-screen as much since the Boys will return with a full TV season under their belt. I also wonder if any of season 1’s characters or sketches will be making return appearances.

I do wish the show had a stronger hook for its comedic sensibility; fellow IFC sketch show Portlandia, for example, liberally mocks upper middle class privilege. For better and worse, The Birthday Boys is little more than a bunch of guys goofing around.