Posted in: Disc Reviews by Brent Lorentson on August 7th, 2014 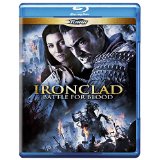 In the wake of the success of Game of Thrones, many companies are trying to ride on that bandwagon and produce films that will hopefully capture the same audience. Unfortunately, it would seem so few come close to capturing the magic that the HBO series brings to the small screen. To be upfront, I haven’t seen the first Ironclad film, though upon looking it up on IMDB I see that it boasts a solid cast. (And after watching a trailer for the film, it is something I’d like to check out.) Fortunately in the case of Ironclad: Battle For Blood, it is a sequel that stands alone from its predecessor.

Set along the border of Scotland in 1221 — though the real filming was said to be done in Serbia — the film has a strong and promising start as we see Guy (Tom Austen) engaged in a battle to the death while onlookers cheer and make bets. Unfortunately, the story is more about Hubert (Tom Rhys Harries) and the choices he has to make while his father’s kingdom is being sacked by Celtic raiders that are seeking vengeance.

I would have much more enjoyed a film that followed a young boy being thrust into the thick of battle and having to make choices for his people before even finishing puberty.  With no time to grieve for the loss of his father and suddenly being given the task of protecting his kingdom and all those that inhabit the grounds, this could’ve had the potential to be an intense character study. But instead, the film takes the easy way out and simply follows Hubert as he sets off on a quest to find his cousin and others to take up their swords and fight in honor of the kingdom.

Even when Hubert convinces Guy to join in the battle, what I could never understand is why not take this time when they are outside the castle and undetected by the raiders to thin the herd, so to speak? But yet they manage to sneak back into the kingdom without any sort of confrontation. Even more perplexing, it’s not as though Hubert returns with an army; instead he comes back with just a few misfits that are willing to fight for some money. We’re not talking about a gathering of the Seven Samurai or even the Dirty Dozen of the Middle Ages; it’s just an everyday batch of run-of-the-mill hired hands.

Though the sets are impressive, the overall look of the film reflects the budget they had to work with. It’s nothing too distracting, but the film does limit itself from having too many elaborate camera shots. The decision to give the film a shaky cam look in the moments of battle worked at times, but mostly it was nothing more than an unwanted distraction.

Considering the first film had James Purefoy and Paul Giamatti, Battle for Blood boasts a cast of virtual unknowns that deliver some solid performances. Austen carries his scenes nicely and handles the battle sequences well enough to make his character believable. As for Harries, his character was never given much to work with and could never be seen as a man that could one day rule the kingdom.

There really is nothing much to this film. The beginning functions as a set-up for a siege that takes the viewer an hour to actually see, and the payoff simply isn’t there.  Rio Bravo, The Alamo, Assault on Precinct 13, those are all brilliant siege films where we see a few standing their ground against many. But Ironclad simply doesn’t hold its own next to these classics. Instead, it just left me impatiently waiting for a climax so underwhelming that I would have been better off not watching the final 20 minutes and left in “suspense” for what could have been.

Ironclad: Battle For Blood is presented in an aspect ratio of 2.35:1.  The 1080p image is arrived at with an AVC MPEG-4 codec at an average of 21 mbps. Though most of the film seems too masked in a layer of smoke and clouded skies, I found the film to have quite a few striking moments. Being shot digitally, the transfer is just about flawless and has no visible artifacts to be seen. What I do appreciate is how all the mud and grime seems to come through sharply and with fine detail. I’m a bit surprised how good this transfer looks considering the low bit rate, as well as being compressed on a 25GB disc.

The DTS-HD Master Audio 5.1 track is another one of those surprises that this release has.  All the clangs of the swords, as well as the fleshy impact of the swords taking their victims came through nicely. Despite the accents, the dialogue comes through clearly.  Most impressive is the score by Andreas Weidinger that helps give the film a more epic feel to it with its chorus and percussion bass.

Behind The Blood: (15:04) This may not be the longest of bonus features, but the content has plenty for those that are curious to learn more about the production. The most surprising moment in the feature is seeing how, just beyond the film set, there is a busy highway in the distance. We also get peeks into the costume department and interviews with the cast and crew throughout the featurette.

For those who haven’t seen the first Ironclad film, it doesn’t seem to be necessary to watch it before Battle for Blood. For those that are fans of Game of Thrones, you may find this to be nothing more than a tease that will make the wait for the return of Game of Thrones seem all the more difficult. (Especially since Thrones actress Michelle Fairley appears in a supporting role.) It’s a far cry from being the worst of the straight-to-video medieval period films, but it still should have been so much better.

Brent Lorentson is a horror writer and film critic based out of Tampa, Florida. With a BA in Digital Film, he co-wrote and co-directed Scavenger Hunt. His short stories have appeared in various horror anthologies. In 2019 his short script Fertile Blood will be a part of the anthology horror film Slumber Party. He is currently working on his first novel A Dark and Secret Place set to be released in late 2019. Favorite Films: Taxi Driver, Fight Club, I Saw the Devil, The Wild Bunch, Dawn of the Dead, A Clockwork Orange, Pulp Fiction, Heathers, The Monster Squad, and High Fidelity.
Cell 213 Transformers Cybertron: The Complete Series