Posted in: No Huddle by Brent Lorentson on August 11th, 2014 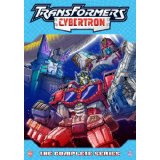 I never knew just how many incarnations of Transformers actually existed; with this review of the Cybertron series, this will be my third take on the series, and for better or worse, they still manage to deliver a good time. Known originally in Japan as Transformers: Galaxy Force, this series had its run from 2005-2007.  Cybertron does appear to be a sequel in the line of the previous series Energon, though some of the changes that were made unfortunately left me a little disappointed.

This time around Cybertron is in the middle of a crisis as a large black hole threatens to absorb the planet and home to the Transformers.  With very little choice, the Transformers use the space bridge to travel to Earth where they plan to take cover until they can come up with a plan to save their home and the rest of the universe.  This works as a nice jumping off point to get the series rolling, but sadly this is really all the series is about, and it takes 52 episodes to tell this story.

To fill in the gap there are some fun little side stories to keep the kids entertained, and thankfully the human characters this time around manage to be effective and pleasantly not as annoying as the human roles in the previous series.  Coby, Bud and Lori are the humans who are pulled into the roles of helping the Autobots out, and it’s in Coby I feel that we have the most likeable human in all of the rebooted series to date.  Coby is young and brash as we’ve become accustomed to seeing in the human counterparts in the series, but he actually brings some mechanical experience to the table to help out the Autobots, and thankfully he isn’t so much of a brat as Kicker was in the Energon series.

It seems the writers were struggling to stretch out this plot for the 52 episodes. On planet Velocitron (the speed planet) it seems to take three episodes just to have a race for a Cyber Planet key that turns out to be nothing more than a ruse.  Literally episodes of buildup for a race that ends up with them simply deciding to have to do another race in the future: it’s this kind of plot “movement” that is mind-numbingly frustrating.

The series does take us to new planets, as I mentioned above there is Velocitron as well as the Jungle planet.  Unfortunately Velocitron seems to be used for nothing more than for races to fill in blocks of time.  These locations are nice, but I can’t help but wish we got to see more of Cybertron; it would have been fun to see it in all its glory, and seeing the Autobots trying to save their home, but we only get a glimpse of that here.

Sadly Bumble Bee doesn’t make an appearance in this series, but taking the spot of the young car is Hot Shot.  Many of the more popular and classic Transformer characters are not around for this series, and in a way that is fine; after all, how many times do we need to see these characters rehashed?

My biggest complaint with the Cybertron series is the actual look of the Transformers.  Instead of the standard cel animation look I’ve grown accustomed to, this time around the characters a very much 3D CGI. I understand this becomes a more time- and cost- effective way to portray these characters; they simply just don’t look nearly as good as the original designs.  As the series plays on, it seems the characters start to look better and blend in better with their location cell animations, though there continues to be a disconnect between the Transformers and the humans and the sets that they interact with.

By the time I got to the final episodes of this series, I can say I was glad to see it was finally over, though the series does come to a satisfying end that is filled with some great battles.  Sadly, the show never delivered on this quality of action or plot movement till the final disc.  Sure we get some fun battles here and there, but also by this point the cutaway shots of characters transforming just became meddlesome, since it was something we’ve already seen dozens of times before.  While this isn’t the worst in the series, it is a far cry from being the best.  But for kids who are in love with these characters, I’m sure they’ll have some fun with the series.

Brent Lorentson is a horror writer and film critic based out of Tampa, Florida. With a BA in Digital Film, he co-wrote and co-directed Scavenger Hunt. His short stories have appeared in various horror anthologies. In 2019 his short script Fertile Blood will be a part of the anthology horror film Slumber Party. He is currently working on his first novel A Dark and Secret Place set to be released in late 2019. Favorite Films: Taxi Driver, Fight Club, I Saw the Devil, The Wild Bunch, Dawn of the Dead, A Clockwork Orange, Pulp Fiction, Heathers, The Monster Squad, and High Fidelity.
Ironclad: Battle for Blood (Blu-ray) Muppets Most Wanted (Blu-ray)