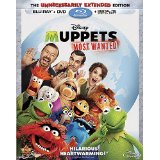 The Muppets debuted in 1955, and the late great Jim Henson’s creations have been delighting audiences (and fellow entertainers) of all ages ever since. They’ve made their mark on the small screen — most notably with The Muppet Show (1976-81) — and at the movies, starring in eight feature films across four different decades. However, 2011’s The Muppets was their first big-screen outing in a dozen years, and the movie spent most of its time wondering if the Muppets’ old-fashioned, irreverent charm still had a place in a more jaded pop culture landscape.

The answer was a warm, if not quite resounding, yes. With that out of the way, Muppets Most Wanted is a return to the sort of zany showbiz farce that made them movie stars.

Muppets Most Wanted comically picks up precisely where the previous movie left off. The triumphant “The End” title card from the last film is still illuminating the sky when our Muppets realize the cameras are still rolling. Cue the ensemble musical number “We’re Doing a Sequel”, which features a pair famous faces doing a musical cameo and a funny lyric about how this film (technically the seventh Muppet sequel) is a placeholder until Tom Hanks agrees to do a fourth Toy Story. We’re quickly introduced to Dominic Badguy (Ricky Gervais), a slick manager who wants to capitalize on the Muppets’ resurgence and convinces them to embark on a European tour. SPOILER ALERT It turns out Dominic Badguy has a hidden, nefarious agenda.

Dominic works as a sidekick for Constantine, the World’s Most Dangerous Frog. Constantine also happens to bear an uncanny resemblance to our hero Kermit the Frog. With the help of a well-placed facial mole, Constantine breaks out of prison and swaps places with Kermit, who is arrested and thrown into a Siberian gulag overseen by Nadya (Tina Fey). Constantine and Dominic plan to steal England’s Crown Jewels. Under the cover of the Muppets’ European tour — which features stops in Berlin, Madrid and Dublin — the two crooks uncover clues to the jewels’ location. Their various heists attract the attention of leisurely French Interpol investigator Jean Pierre Napoleon (Ty Burrell) and his mismatched partner, Sam the Eagle. Meanwhile, Kermit remains trapped in the gulag alongside prisoners with names like Big Papa (Ray Liotta) and Danny Trejo (Danny Trejo). This being the Muppets, there’s naturally a “let’s put on a show” element to both Kermit and Constantine’s storylines.

The film is zippily directed by James Bobin, who also helmed its 2011 predecessor. Disney — which bought the Muppets a decade ago and now owns everything worth anything — has shown a good amount of faith in Bobin. The studio has also tapped him to direct Through the Looking Glass, the sequel to the billion-dollar-grossing Alice in Wonderland. Not too bad for a guy whose previous big gig was co-creating HBO’s Flight of the Conchords with Jemaine Clement and Bret McKenzie. Clement appears in Muppets Most Wanted as another gulag prisoner, while McKenzie returns to write and produce all the film’s songs.

Although no single song in Muppets Most Wanted is as good as “Man or Muppet” — which won McKenzie an Oscar — I thought the sequel had a stronger set of tunes overall. In addition to “We’re Doing a Sequel”, I enjoyed the inspired absurdity of Constantine’s “I’ll Get You What You Want (Cockatoo in Malibu).” The three human leads each headline their own musical numbers. My favorites were Dominic getting put in his place by Constantine — Gervais gets a much better “bad guy” song than Rapping Chris Cooper — in the funny “I’m Number One”, and Fey headlining the elaborate, doo-wop prison number “The Big House.” Burrell kind of got the short end of the musical stick, but his “Interrogation Song” with Sam the Eagle does have some fast, clever wordplay. (Fey and Burrell seem to be locked in a Funny Accent Olympics.) The movie’s music also nods to “A Chorus Line” and some newer pop hits.

More importantly, the focus is squarely back on the Muppets. The previous movie was a passion project for star/writer/producer Jason Segel, who deserves a lot of credit for helping reinvigorate the Muppet brand. The problem is there were too many segments of The Muppets that felt like a Jason Segel/Amy Adams rom-com that just happened to have the Muppets in supporting roles. Although it’s still a bummer that original performers like Frank Oz decline to participate, the current crop of Muppeteers have largely been in their roles long enough to take ownership of the characters. I was particularly impressed by the fact that it only took a mole, a frown and a different voice to credibly turn Kermit the Frog (one of the most recognizable pop culture/felt faces of the last 50 years) into a different character.

Well, not exactly. The movie’s central joke is that none of the Muppets realize Kermit has been replaced by an impostor who doesn’t act or sound anything like him. The real Kermit had misgivings about the European tour, and the film has a little bit of fun with the idea that Constantine lets them do whatever they want. (Which leads to disastrous bits like “Indoor Running of the Bulls.”) Miss Piggy remains as aggressive as ever in her quest to settle down with Kermit, so the fact that his doppelganger is so accommodating isn’t the worst thing in the world.

Even though the human co-stars rightly take more of a backseat in this film, I still felt like the Muppets’ deep roster was underutilized. Besides Kermit and Miss Piggy, the only ones who get more than a few one-liners — Statler and Waldorf make every one of them count — are Fozzie Bear, Sam the Eagle (a personal favorite), Animal, and Walter, who was introduced in the 2011 movie. (To the film’s credit, there’s a brief bit acknowledging two Muppets who were omitted from the previous flick.) The rest of the Muppets cast is largely relegated to appearances that are only slightly longer than the celebrity cameos.

Ah, yes the cameos. I didn’t do an official count, but the amount of celebrities who came to play in this movie is off the charts. (Trejo, in particular, seems to be having a blast.) Everyone from Salma Hayek to P. Diddy pops by. I won’t spoil too many more because the surprise factor is a big part of their appeal; I’ll just say the sight of two-time Oscar winner Christoph Waltz dancing the waltz with Sweetums was pretty sublime.

Muppets Most Wanted is presented in an aspect ratio of 1.78:1. The 1080p image is arrived at with an AVC MPEG-4 codec at an average of 33 mbps. The visual presentation is as bright and crisp as you’d expect, with practically every color in the rainbow (connection) getting a chance to shine. (Green, of course, being the notable standout.) The scenes set in the Siberian gulag are the exception, but still provide an impressive amount of detail in the way they present the harmlessly grimy prison. The blemish-free HD image also offers a pleasing amount of texture, letting you see the fibers in the main characters’ felt faces and reassuring you they are largely physical — rather than CGI — creations. (Although there’s plenty of CGI sprinkled in.) I wouldn’t call this a show-off title for your TV, but this Blu-ray from Disney gets the job done in terms of brightening your day.

The DTS-HD High Resolution (HR) Master Audio 7.1 track works as hard as the Muppets to put on a show. It’s an active, dynamic presentation with very impressive separation. Since many scenes feature a large group of characters or the Muppets performing for a large group of people, there’s always at least some minor activity going on in the rears. The only time you really feel the 7-channel might of this track is during any of the showstopping musical numbers, particularly the “We’re Doing a Sequel” opening.  (Which ends with a nice bit of directionality after the Flying Zucchini Brothers are fired out of a cannon.) It may seem like a bit of a missed opportunity, but I think it prevents things from feeling too intense for younger viewers.

All of the bonus material is presented in HD. Unlike its predecessor, this disc doesn’t come with a “Disney Intermission” feature that offers up random silliness when you press pause. Bummer.

The Unnecessarily Extended Cut: This version adds about 12 minutes to the 107-minute theatrical cut and (mostly) lives up to its name. Rather than adding entire scenes or characters, the additional material mostly consists bits in the theatrical cut that are expanded. (They’re also pretty seamlessly integrated.) Among the most notable additions are a brief extra appearance for Waltz, a slightly longer version of Constantine’s escape from the gulag (as well as a little backstory for Constantine courtesy of Nadya), and a funny extra verse in “I’ll Get You What You Want.” The one extra gag I could’ve done without is a moment of (literal) bathroom humor between Constantine and his Number Two.

The Statler & Waldorf Cut: (1:42) The curmudgeonly hecklers also offer up their definitive cut of Muppets Most Wanted. All you have to do is look at the running time for this special feature to see what they thought of the film.

The Longer Longest Blooper Reel in Muppets History: (9:45) Some seemingly manufactured gaffes involving the Muppets — as well as some seemingly real miscues with the human cast — are mixed in with some behind-the-scenes comments from Constantine and other cast members. If nothing else, this lives up to its title by outlasting the blooper reel on The Muppets Blu-ray. (Which “only” clocked in at 8:33.)

Rizzo’s Biggest Fan: (2:47) I’m not the only one who’s crying out for increased screen time for some of the supporting Muppets. Here, Rizzo the Rat’s biggest fan lobbies filmmakers to give the rodent a bigger role in the movie. The joke is a bit drawn-out (even at less than three minutes), but at least there’s a very good punchline.

“I’ll Get You What You Want” Music Video: (3:18) Oscar-winning songwriter Bret McKenzie steps in for Constantine in this silly clip for one of the movie’s best songs.

Muppets Most Wanted ends up being a little overstuffed, which isn’t exactly a surprise when you have a new famous face dropping in every few minutes. The plot is nothing new — this isn’t the first time the Muppets have been caught up in the search for a valuable jewel — and some of the references are corny and dated. (The film features Shawshank Redemption and Silence of the Lambs sight gags, which are both — ready to feel old? — at least 20 years old.)

Still, the Muppets have absolutely retained their multi-generational appeal, which is why they can attract such a wide variety of special guest stars to such a silly, charming outing. Muppets Most Wanted pokes fun at sequels, but in this case “it’s good to be together again.”