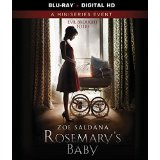 It’s kind of astounding that it took this long for somebody to revisit Rosemary’s Baby. Don’t get me wrong: I’m not suggesting Roman Polanski’s indelible 1968 adaptation of Ira Levin’s 1967 novel was crying out for a remake. It’s just that at this point you’d be hard pressed to find any horror classic — or any horror film, period — that hasn’t been re-done. (Stay strong, Exorcist!) And you probably wouldn’t expect said horror classic to be re-imagined as a bloody network TV miniseries.

I say “bloody” because NBC’s two-part/four-hour modernization of Rosemary’s Baby is actually more graphic than Polanski’s theatrical chiller. (Then again, I still can’t believe the network gets away with showing half the inspired, disturbingly brilliant stuff they do on Hannibal, so maybe this shouldn’t come as a big surprise.) Unfortunately, this stylish new version lacks subtlety and — more importantly — a fundamental understanding of what makes the story scary in the first place.

Zoe Saldana, taking a break from big-budget franchise fare, stars as Rosemary Woodhouse this time around. The Rosemary’s Baby miniseries is nominally based on Levin’s original novel and its sequel, Son of Rosemary, but it largely follows the familiar framework captured by Polanski’s film. Rosemary and Guy Woodhouse (Patrick J. Adams) move into an upscale new apartment building and are welcomed with open arms by meddlesome older neighbors Roman and Minnie Castevet (Jason Isaacs and Carole Bouquet).

The younger couple is looking for a fresh start, but Guy strains to provide for both of them. (Here, Guy is a struggling writer instead of a struggling actor.) Things turn around after Guy starts buddying up with the Castavets. One night, Rosemary experiences a harrowing nightmare where she is violated in her sleep. Soon thereafter, she discovers she is pregnant. Unfortunately, Rosemary’s health starts to deteriorate and Guy becomes increasingly distant. In her desperate search for answers, she uncovers a disturbing secret about her neighbors.

I suspect even people who haven’t actually watched Polanski’s original or read Levin’s novel already know what’s growing inside Rosemary, so the miniseries doesn’t even bother hiding the Castevets’ malevolent nature. I understand the choice, but it robs this version of the satisfying slow build of Rosemary discovering there’s something far more sinister beyond the “annoying older neighbor” facade. (That’s one of the inevitable pitfalls of adapting a piece of work that has been a major part of our collective pop culture consciousness for almost 50 years.) The makers of this miniseries seemed to recognize that problem and made a number of changes and additions.

The most noticeable — and most effective — change was transplanting the action from New York to Paris, which heightened the sense of isolation this non-French-speaking Rosemary eventually feels. In this version, the Woodhouses have also already suffered a miscarriage, which makes Rosemary more ambivalent and fiercely protective about her new pregnancy. I don’t personally feel Rosemary needed extra motivation to be ambivalent and fiercely protective about being pregnant, but I’m generally not mad at this change. The alterations I really don’t care for are the ones that replace the offbeat, relatable menace of the original story and make this Rosemary’s Baby feel like it spent a lot of time and energy (and money, considering they actually filmed this in Paris) just to crank out a pretty conventional horror film.

On top of that, the relatively straightforward story — again, there’s not much mystery to what’s going on — strains to fill the 170-minute run time. Rosemary’s Baby is directed by Agnieszka Holland (Europa Europa) — were producers trying to recreate Polanski’s Polish mojo? — and written by Scott Abbott and James Wong. Wong has directed two Final Destination movies, so the unfortunate “accidents” that are only alluded to in the original story become absurdly elaborate (and absurdly violent) set pieces. This new version also mixes in a creepy black cat, some unnecessary jump scares, even more unnecessary flashbacks, and (not surprisingly) a sexier devil who helps cap off Part 1 of the miniseries.

Saldana was also a producer on this project, which is probably why no one stood up to tell her she wasn’t quite right for the role. I admire her for trying to stretch as an actor, but the fierce feistiness she projects in those aforementioned blockbusters runs counter to the frailty she’s charged with portraying as Rosemary. And if the goal was to make the character more of a  distinctly modern woman, neither the performance nor the script really rise to the challenge. What’s left is Saldana throwing on an unconvincing pixie wig in Part 2 and doing a sad Mia Farrow impersonation. On the other hand, Adams and the script have put an interesting spin on Guy by portraying him as more outwardly caring and conflicted; the actor makes Guy’s ineffectualness feel more pathetic. Isaacs and Bouquet are considerably younger than the traditionally-elderly Castevets, which makes them more seductive to the Woodhouses. It also makes the alluring Bouquet more of a cougar-y cliche. Meanwhile, the miniseries can’t seem to decide whether Isaacs’ Roman is the devil or merely worships him, but the actor still brings his charming, icy charisma.

If the original Rosemary’s Baby was elegant in its simplicity, this handsome, bloated miniseries only serves to remind us the devil really is in the details.

Rosemary’s Baby is presented in its original aspect ratio of 1.78:1. The 1080p image is arrived at with an AVC MPEG-4 codec at an average of 28 mbps. Say what you will about the quality of the story, but the production values for this miniseries are top-notch. This Lionsgate Blu-ray offers a clean — if not quite razor sharp — presentation of Paris that doesn’t shy away from the liveliness of its gorgeous setting when the action shifts outdoors. Close-ups also offer an impressive amount of fine detail. Inside Le Chimere hotel, where most of the action takes place, black levels are appropriately inky and there is nice shadow definition and separation. The only colors that stand out are red (not a surprise) and blue; the latter makes an important (but thoroughly cheesy) appearance in the classic “What have you done to its eyes?” moment. That scene is a perfect encapsulation of all the ways this miniseries proves that more isn’t always better.

The DTS-HD Master Audio 5.1 track is largely dominated by dialogue and Antoni Lazarkiewicz’s string-and-piano-heavy score. The dialogue comes through intelligibly throughout (and is confined to the front-center speaker), while Lazarkiewicz’s score feels textured and substantial. (Even if, like the rest of this movie, it’s not very subtle.) Subs only rumble to life occasionally. (Like when Rosemary is using Le Chimere’s elevator.) There is, however, a pleasing amount of low-key immersion during a party hosted by the Castevets and throughout those Parisian outdoor scenes. Overall, not a show-off track by any measure, but still a very effective and balanced presentation.

Fear is Born: The Making of Rosemary’s Baby: (12:03) Saldana works hard to remind us this was not a remake of Polanski’s film and says the goal was to tell the story through different eyes. Beyond that, this is a pretty standard “Making Of” featurette that includes comments from the crew and the four main cast members. (Bouquet and Isaacs, in particular, are charmers.)

Grand Guignol: Parisian Production Design: (6:35) Production designer Anne Seibel takes us inside the real-life building that housed the Castevet and Woodhouse apartments, and talks about finding the right parts of Paris to film. (The ones that distinctly showed off the city without feeling too tourist-y.) Meanwhile, the actors talk about how easy it was to get in character whenever they strolled onto the elegant sets.

Having now watched this version of Rosemary’s Baby, I’m not totally surprised it tanked.

I wouldn’t say it’s aggressively awful. In fact, the miniseries is pretty to look at — especially on Blu-ray — and features some interesting performers. The problem is the apparent lack of ingenuity and imagination when this Baby was conceived.

The Blacklist: Season 1 The Quiet Ones (Blu-ray)