Posted in: The Reel World by Archive Authors on August 29th, 2014 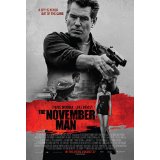 The pleasure of The November Man is seeing an ex-James Bond come out of retirement being all cool and mean and efficiently lethal. The ex-James Bond is Pierce… Pierce Bronson. He’s not as old as Sean Connery, but he’s pretty old, and too old to look this good killing people. The November Man is nothing but a cheap and easy, end-of-August bit of popcorn fodder, but it works well. It works so well it already has a sequel planned. I don’t think the budget on this is very large, so it probably was a no-brainer. The locations are all over middle Europe and Russia, but I think that’s cheaper than New York City or London. Pierce is clearly enjoying doing all his old Bond tricks, except this time he’s Patrick Devereaux, which really isn’t as cool a name as James Bond, but we all know that this all about Bond. We like to see Pierce bash guys with lead pipes and shoot henchmen, because we know he’s getting too old for this stuff. But truthfully, Devereaux is not Bond. He’s a different character with a completely different set of motivations for his actions. Bond seems to have suppressed nearly all human emotions; Devereaux knows he shouldn’t care about people, but for reasons I won’t mention, he does care. He even tells a young protege not to care, and then Devereaux doesn’t follow his own advice. So Devereaux  isn’t James Bond, but don’t tell Pierce that, because he’s bringing back the famous squint with every fiber of his being.

There are lots of familiar faces supporting Pierce in this movie, but not necessarily familiar names. Will Patton (Falling Skies, The Postman) and Bill Smitrovich (Without A Trace, Life Goes On) are high-level CIA managers who are both closely associated with former field agent Devereaux. Olga Kurylenko is probably best known as Vera from the TV show Magic City but was also a Bond girl in Quantum of Solace. Olga plays Alice and is the woman that everyone wants in the movie, because she has some information. Devereaux needs to protect her so no one gets the information. Luke Bracy is fairly new on the scene and will soon be playing Johnny Utah in the Point Break remake. Luke plays the young protege who screwed up a mission and got on Devereaux’s bad side. When that mission went bad, Devereaux quit. Now a few years later, things are getting personal. There are many twists and turns and double-crosses and triple-crosses. There are many bad guys and even more henchmen. All of this would play like a spoof if Pierce wasn’t so darn serious. It’s a little reminiscent of the recent Kevin Costner crazy spy movie Three Days To Kill, but not as over-the-top goofy. Spy movies are either pure entertainment or super-serious. We’ve had some of the serious kind recently, like the two recent John Le Carre adaptations, Tinker Tailor Soldier Spy and A Most Wanted Man. The November Man is safely in the middle.

The story revolves around a Soviet power player with a very shady past who is killing dozens of agents who might tie him to his horrible past. The story seems to have serious roots in actual events from the last twenty years of post- Cold War and pseudo-cloak-and-dagger backroom skullduggery. Most of us don’t have to know about how awful things like Chechnya and Bosnia were in the 1990. That is the back story here, and that is deadly serious stuff. So we have a movie that functions as easy thrills, spills and chills but plays in the real world of how evil and dirty espionage really is. When they make the sequel, I would like the producers to take the spy business more seriously. Unfortunately, the spy business is so shady and dirty that no one will ever get to the real truth. The November Man is at best only a beginning. Pierce is only going to get older. Hopefully he’s going to get wiser and make a story that resonates deep in our hearts and guts. He didn’t do it this time, but he’s got a few more years left in him.