Posted in: Disc Reviews by Brent Lorentson on August 29th, 2014 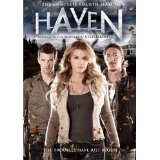 “You were always such a clever troublemaker.”

When Audrey Parker (Emily Rose) entered the barn in the conclusion of season 3 of Haven, all “the Troubles” were supposed to come to an end for the small seaside town of Haven, Maine.  Sure everything seemed to go as planned, that is until Duke (Eric Balfour) took the plunge into the barn before it disappeared, leaving Sheriff Nathan Wuornos (Lucas Bryant) behind.  As cliffhangers go, this ranked right up there with the season 1 finale when we discovered that there were two Audrey Parkers.  I loved season 3 of Haven; the pursuit of the “Bolt Gun Killer” as well as the show’s exploration into Audrey Parker’s past was excellent storytelling that continues to remind me of the David Lynch classic series Twin Peaks.

Thankfully I didn’t have long to wait to discover what would happen next to the residents of Haven after binge watching seasons 1-3 before getting to review season 4.  The show picks up six months following “The Hunter” meteor shower that wreaked havoc on the little town.

Though Duke finds himself in an aquarium in Boston, no one seems to know where Audrey is.  In custody at the hospital, it looks as though Duke will find himself behind bars or locked away in a mental hospital, that is until newcomer Jennifer Mason (Emma Lahana) comes to his aide.  She’s apparently been hearing Duke and Audrey in her dreams and is hoping to find answers about why she’s been hearing their voices.

While this is going on Lexi/Audrey (Emily Rose) is working in a bar and doesn’t seem to have any recollection about anything from her past connecting her to Haven.  At the bar she meets a strange customer who seems to know more about Lexi and is wanting to help her figure out who she “really” is.  This mysterious man is William, played by Colin Furguson, who many may recognize from another hit show on SYFY channel Eureka.

As for Haven, the town is somewhat in a police state, with Dwight (Adam Copeland) as the new acting Chief of Police while Nathan is on leave.  Patrolling the streets of Haven are members of the Guard.  In season three we got a glimpse of this group and how they are dangerous to those who are not “troubled”.  The Guard seems to have nothing but disdain for Nathan and believe the only way he can make things right is for Audrey to take his life.

Basically if you were thinking you can just pick up and start watching the show and understand what is going on, well, best of luck to you.  Just as we’ve seen in the previous seasons, the writers are patient in revealing just what is going on.  Personally I had a hard time getting into this new season, not because it was bad, but certain characters just seemed a bit off to me.  The drama going on between the writers of the Haven Herald, brothers Dave and Vince just seemed out of place in roles that had them in some fairly ominous situations.  It was fun knowing that they always knew more than they ever let on, but having them doing things that blurred the lines of right and wrong in the safety of Haven just felt a bit out of place.  Especially seeing Vince as the leader of the Guard, it just seemed like a stretch.

But after a few episodes when we finally get a reunion of sorts between Nathan and Audrey, well, things finally seemed to fall back into place, even if she believed she was really Lexi.  The romance between Nathan and Lexi/Audrey has always been complicated, but something viewers have rooted for. Adding William as a wild card to the mix, well, that is what makes this season so much fun.  William teases so much about Audrey’s past and who she could possibly be that when it’s hinted that Audrey could at one time be responsible for all “the Troubles”, well, it’s enough to make fans antsy to know more.

There are plenty of fun moments in this season; one that was fun to see is an episode that takes us on a journey through Haven if “the Troubles” never found their way into town.  This perfect idyllic town is a blast, whether it’s seeing Nathan as a doctor or Duke as a detective, we see a version of Haven we never could have expected.

The arrival of Jennifer is for me the highlight of the season.  The secrets, twists and turns her character takes us on are refreshing and are a bright spot in this world that seems to be getting darker with every passing episode.  As we see Jennifer and Duke bond, it is a nice distraction from the chaos that seems to follow Nathan and Audrey.

By the time the season finale rolls around for Season 4, it left me wanting more.  This is one of those shows that knows its fan base, and the writers and all those involved seem to know just what we want, which is delivering us the unexpected.  Sure, some twists some may see coming, but what is most impressive is how much I care about how it effects the characters I’ve grown to love and the others I love to hate.

Haven Season 4 is presented in its original aspect ratio of 1.78:1.  The 1080p image is arrived at with an AVC MPEG-4 codec with an average of about 30 mbps.  This is generally a good looking show that is transferred from a 35mm image.  The exteriors and locked down shots are very pleasing to look at, but the quality of some of the CGI effects seems to not quite be as sharp as it should be.  The creature effects as well as certain of CGI effects have a very obvious fake quality to them but are easily forgiven due to the solid work by the rest of the crew.

The DTS-HD Master Audio 5.1 track is generally a dialog-heavy track.  All the dialog is clear throughout, there are moments where we are taken into some caves where we get to hear more of a dynamic use of ambient sound.  With the explosions we get a decent amount of bass.  This is a show that is mainly mixed for viewers with front end speakers and not so much for dynamic surround sound.  It’s not the best mix audio fans may want, but for a TV series with its limited resources the end product isn’t too bad.

Commentaries:  There are six commentaries with various different writers throughout the season.  This is a very welcome addition to the set where we get plenty of inside information about the production of the show.  For fans of the show, these are worth a listen.

“Inside Haven” Featurettes: Here we have 13 featurettes, each taking a brief look about a particular process behind the making of the show.  Whether it’s seeing how they create some of the props, or seeing how certain sets were created, this is a very nice collection of videos.

Haven Panel Highlights: Here we have three panels from when the cast, writers and producers went on tour to promote the show. San Diego Comic-Con (23:46), Nerd HQ (19:42) and New York Comic-Con (20:26).  These are each fun and informative panels where we get to see their personalities shine as they answer questions for the fans.

Three Interviews With The Cast:  These may not be as comprehensive as the panels, but they are certainly entertaining.  My favorite being a Trivia Challenge between the actors as they compete to answer questions about the show and one another.

“Darkside Seekers” Webisode Series:  Multiple short but entertaining clips that are presented as videos or “evidence” about the strange and supernatural events taking place in Haven.

Pancakes: The Morning After Deleted Scene: (2:15) A brief scene that follows *spoiler alert* when Audrey and Nathan finally get together.

Behind the Scenes Reel: (4:08) A montage of scenes that were shot during the making of Season 4.  Nothing too revealing, but something fans will be compelled to watch.

Blooper Reel: (11:36) Normally I’m not a big fan of these reels, since they are generally never too amusing.  This feature was actually a little amusing, and it was refreshing to hear these flubs without the annoying censor beep.

Despite its slower start, the show seemed to fall back into place by the fourth episode in.  This isn’t a show I’d have someone try to just pick up and watch; just explaining who Audrey Parker is can be enough to give you a headache and scare away a potential new fan.  For those who have already been watching, this season was a fun ride; it may not have been as complete or as tight as Season 3 was, but this continued to be a strong season and left me wanting more.  This fall I’ll be watching week to week as the writers continue to tease us about a possible end to these “ troubles”.

Brent Lorentson is a horror writer and film critic based out of Tampa, Florida. With a BA in Digital Film, he co-wrote and co-directed Scavenger Hunt. His short stories have appeared in various horror anthologies. In 2019 his short script Fertile Blood will be a part of the anthology horror film Slumber Party. He is currently working on his first novel A Dark and Secret Place set to be released in late 2019. Favorite Films: Taxi Driver, Fight Club, I Saw the Devil, The Wild Bunch, Dawn of the Dead, A Clockwork Orange, Pulp Fiction, Heathers, The Monster Squad, and High Fidelity.
The November Man The Walking Dead: Season 4 (Blu-ray)