Posted in: Disc Reviews by Brent Lorentson on August 28th, 2014 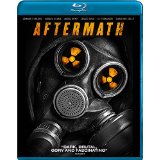 Considering the state the world is in, I’m a little surprised there isn’t more talk about a possible World War 3 scenario being played out.  This isn’t something I want, but watching the news, it is certainly something that resonates in the back of my mind and gives a moment of reflection.  Aftermath is the film that preys upon that fear of what a possible World War 3 could be. The results are far from promising, and it succeeds in telling the inevitable fate of the world, despite how bleak the outcome may be.

The film opens with Hunter (C.J. Thomason) hiking in the wastelands of Texas.  Along the highway he comes across a mother and her son; together they witness what appears to be the beginning of a nuclear war.  Hunter is quick to react, using his medical training to do what he can for the young boy who looked directly into the impact light and has now gone blind.  The three set off together to find food and shelter, knowing they do not have long before the radiation spreads and begins to have its effects.

Upon finding shelter, Hunter finds himself to be the only doctor with several other survivors who pack themselves into a cellar where they plan to wait out the nuclear fallout with their limited supplies.  Along with a blind child, there is also a woman that is seven months pregnant, and an elderly man.  This is not the ragtag group of survivalists you’d hope to be stuck together in an emergency situation, but of course everyone tries their best to do what it takes to survive.

Edward Furlong plays Brad, a hothead daddy-to-be.  It’s been a while since we’ve gotten to see Furlong really have a role he can shine in.  Now, this may not be the role that puts him back on the map, but we do get to see him put in a decent performance that reminded me that at one point he was a young actor I had some high hopes for.  Monica Keena is another actor who gets to dirty it up and play the role of the survivor.  Here we get to see instead of being a female in distress she’s actually one of the key roles in keeping this unit together.  She’s a beautiful woman, but here her looks take a back seat as she delivers one of her better performances.

Unfortunately this film takes a risk by introducing a horror element that allows those who are infected to evolve into zombie-like creatures.  Not all the characters who die go through this phase, and to a degree this adds to the confusion of what’s going on.  This is a film that was doing fine simply being about those with their struggle to survive while others accept their doom with panic or grace.

There is a fun moment when the shelter is under attack and our survivors have to deal with the situation which means to kill or be killed.  The first time this occurs, it’s a moment that is heavy with suspense and did a great job of showing us what our survivors are up against.  Unfortunately this is not the only time it occurs, and when they are under attack again, the redundancy takes away the impact of the attack.

Following the survivors for a month since the attack, the viewer is given a bleak yet entertaining finale.  With shows like Revolution and The Walking Dead, viewers are used to seeing characters band together to survive in an impossible landscape.  With the conclusion of this film, it gave me all I needed to see and all I wanted to see.  Having all the loose ends tied up left me satisfied with the ending but still left me a bit flat knowing that this was a film that I most likely won’t remember down the road.  Sometimes a little ambiguity can go further in creating a lasting impact of a film.

Aftermath is presented in the aspect ratio 1.78:1.  The 1080p image is arrived at with an AVC MPEG-4 codec at an average of 28 mbps.  For a film that is capturing the days following a nuclear holocaust, as expected we get a very saturated and drab-looking picture.  All bright colors have been removed from the film.  With most of the film taking place in a cellar, we are given shots filled with heavy shadows, but still there is plenty of separation so we don’t have to strain to see what is going on.  The lighting and desaturation help with the sickly skin tones of the characters as they waste away as the film goes on.  The film was shot on the Red camera, and is a very good looking film transfer overall with no artifacts.

The DTS-HD Master Audio 5.1 track is a very subtle yet effective track.  There isn’t very much in the way of ambient noise, allowing the viewer to feel that everything beyond the cellar is dead and non-existent.  As for scenes of panic among the survivors or when the cellar is under attack, the score plays well in creating a sense of doom and foreboding throughout.  When the characters are not shouting at one another, a lot of the dialog is spoken a hair above a whisper but remains clear and audible.  This is a well-done mix for a low-key disaster film.

There are no special features on this release.

As disaster films go, Aftermath does work as a film to check out but doesn’t lend itself to being a film with much of a re-watch value.  There are some decent performances here, combined with it being a good-looking film, Aftermath is a film I’d say is worth checking out, but plan on it collecting dust afterwards if it is a purchase.

Brent Lorentson is a horror writer and film critic based out of Tampa, Florida. With a BA in Digital Film, he co-wrote and co-directed Scavenger Hunt. His short stories have appeared in various horror anthologies. In 2019 his short script Fertile Blood will be a part of the anthology horror film Slumber Party. He is currently working on his first novel A Dark and Secret Place set to be released in late 2019. Favorite Films: Taxi Driver, Fight Club, I Saw the Devil, The Wild Bunch, Dawn of the Dead, A Clockwork Orange, Pulp Fiction, Heathers, The Monster Squad, and High Fidelity.
High School Confidential! (Blu-ray) The November Man