Posted in: No Huddle by Brent Lorentson on September 9th, 2014 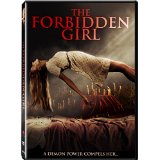 Love can have a strange effect on people and cause them to do things that range from the spectacular to the deranged.  The loss of a loved one can not only break a person’s spirit but send them to the depths of depression and despair from which they will never be able to recover, though most people tend to avoid the melodrama and just wallow in their heartbreak with a couple of beers or a pint of their favorite ice cream.  But what is one supposed to do when the one that they love and cherish is taken from them and they become the number one suspect in the murder of the one they love?  What could this do to a person when they know the responsible party is that of an unseen force from another world?  This is what The Forbidden Girl attempts to explore, but unfortunately this film is messier than most break-ups.

Toby (Peter Gadiot) is the son of a preacher man, and his father is more than a little overzealous about his disapproval towards Toby dating Katie (Jytte-Merle Bohrnsen).  The father is so intent against them seeing each other that Toby has to sneak off to a graveyard to spend time with Katie.  It’s during this late-night rendezvous that the couple is attacked by a demon that emerges out of black smoke and whisks Katie away into oblivion.   Consequently Toby is locked away in a mental hospital for six years as a suspect responsible for what ever happened to Katie.

Where the film takes a more unbelievable twist is whenToby is released from the mental facility and his doctor helps get him a job as a tutor.  Somehow the idea of demons kidnapping young girls is more believable than anyone hiring an ex-mental patient to tutor a child of any age.

When Toby arrives at the home, he is left at the doorstep of not just any home, but a castle.  Greeting Toby is the home’s caretaker Mortimer (Klaus Tange); maybe it’s just me, but the character has a striking resemblance to Spike from Buffy the Vampire Slayer.  Once Toby is settled in his new room he goes on to meet Laura, who happens to look exactly like his lost love Katie.  Is it a coincidence, or something more sinister?  Laura is forbidden to leave her wing of the home due to the fact she is supposed to be allergic to sunlight.

The film only goes on to become more absurd as Toby sees ghosts that try to warn him, as well as him seeing Mortimer and the lady of the house participating in numerous strange activities.  But what hurts this film is its blatant disregard for any of this film needing to make logical sense.  What goes on to hurt the film even more is that not for one minute is this film believable; the world this story is constructed around is simply too over-the-top to ever be taken seriously.

Even with its attempts to be stylish, the film would have been better off without the numerous filters that try to set a mood.  These filters don’t work, because instead of me feeling a deep blue filter is supposed to work to show it is nighttime, instead it leaves me thinking their lighting must be so bad that they needed the filters to cover it up.  This isn’t even counting the horrible superimposed skyline behind the castle to give the sky numerous different looks.

Pile on the fact that the audio just seemed low to the point where I had the volume cranked all the way up just to hear the characters; I just can’t find much in this film that even worked for me beyond the actual location where they shot the film.

When the film seems to be ready to wrap itself up and reveal what it has all been leading up to,   I must warn you, most likely your first impressions about what is going on are most likely correct about what is happening.  Though the film attempts to be a gothic thriller with touches of Polanski and Lynch, it isn’t even close to the caliber of film these filmmakers present.  At best this is what I would feel an episode of Scooby Doo would be if directed by David Lynch.

Despite all that, with some editing I think there is a good film hidden somewhere in this mess.  Gutting about 20 minutes might make this a more straightforward film, but it would be better off.

Brent Lorentson is a horror writer and film critic based out of Tampa, Florida. With a BA in Digital Film, he co-wrote and co-directed Scavenger Hunt. His short stories have appeared in various horror anthologies. In 2019 his short script Fertile Blood will be a part of the anthology horror film Slumber Party. He is currently working on his first novel A Dark and Secret Place set to be released in late 2019. Favorite Films: Taxi Driver, Fight Club, I Saw the Devil, The Wild Bunch, Dawn of the Dead, A Clockwork Orange, Pulp Fiction, Heathers, The Monster Squad, and High Fidelity.
Perry Mason Double Features Born to Race: Fast Track (Blu-ray)