Posted in: No Huddle by Gino Sassani on September 9th, 2014 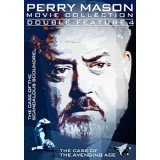 Perry Mason officially ended in May of 1966, but that wasn’t going to be the end. Twenty years later the surviving cast members reunited for Perry Mason Returns. It was Perry and Della back together again. Both Raymond Burr and Barbara Hale returned to their roles. William Hopper had died in 1970, so William Katt joined the reunion as Paul Drake, Jr. Katt might not have really been Drake’s son; he was Hale’s son. When Katt left the films he was replaced by William R. Moses as Ken Malansky. Ken was a young law student helped by Perry once when he was framed in law school for a rival’s murder. He ends up being both a legal assistant and investigator for Perry in the reunion films. Ken’s girlfriend is Amy, played by Baywatch’s Alexandra Hastings. Amy was a rich girl who had too much time on her hands. It led to her involving herself in Ken’s investigations. The films also often starred James McEachin as Lt. Brock, the cop on many of the cases.  M*A*S*H’s David Ogden Stiers would often play his rival in the prosecutor’s office Michael Reston. The team would continue to do 30 television movies from 1985-1995. CBS has now begun to package these reunion films in collections like this.

A senator sues tabloid publisher Harlan Wade, played by Robert Guillaume. Wade is a ruthless man who will ruin anyone’s life to get the story. The senator hires Perry for the libel case, but the team gets more involved than they planned when Harlan ends up dead, and Paul’s friend on the inside is accused of the murder. She’s Michelle (Wilder), and she was just fired. But the suspect pool is deep. Hill Street‘s Rene Enriquez, Homicide: Life On The Streets Yaphet Kotto and even Perry himself could be suspects.

Perry is doing time as an appellate justice as this one begins. He’s hearing the appeal of a man he thinks is innocent but can find no grounds to win the appeal. He has to rule against him. Eighteen months later, back in private practice once again, Perry takes up the case of Colonel Mark Egan (Sutoris). There’s a new witness who comes forward, but it appears Egan escapes during the hearing and the witness now turns up dead. Someone is going out of their way to make sure Egan looks guilty. Perry and Paul work with the local Air Force base to dig up the evidence that might just break the case. Buck Rogers’ Colonel Deering, Erin Grey, takes a demotion to Captain, playing the officer who helps Paul gather the clues.

David Hasselhoff stars as a retired tennis pro with a reputation for the ladies. When his wife is murdered, he’s naturally the prime suspect. It doesn’t help that he’s being framed with evidence and that his wife caught him kissing his old lover that same night.  There’s more behind the kiss than she knew, and it means an uphill battle for Perry and the team. The truth is linked to the dead woman’s sister who was abducted and has been missing for 15 years. This is the last of William Katt’s appearances as Paul Drake, Jr. It also finds Hasselhoff when he was just between his two best known shows: Knight Rider and Baywatch.

It’s back to school for Perry when he comes to the aid of one of his oldest friends. Brian Keith guest stars as Frank Wellman, one of Perry’s old law school buddies. Frank’s teaching a court procedures mock trial class, and his son Frank, Jr. (Nelson) is the star of the class and more than a little full of himself. When Frank, Jr. is murdered, it appears his main class rival Ken Malansky (Moses) is the prime suspect. Of course, he was set up, and Perry agrees to defend him even though it upsets his old friend. The case turns on a scandal cover-up, and Ken ends up becoming Perry’s investigator in the future reunion films. This is a rare Perry Mason case that hinges on modern (for the time) technology and feels a lot like a Columbo episode instead of Perry Mason, as Perry involves the class he’s helping to teach, knowing that his best suspect is among them.

A tyrannical play director is killed after firing the stage manager and pretty much ripping into everyone in the cast and crew. Star Trek: The Next Generation and A-Team star Dwight Shultz stars as the doomed director. There are the usual plethora of good suspects and, once again, the cops arrest the wrong guy, in this case the fired stage manager. This time you would think the suspect had an airtight alibi. Perry Mason himself saw the man fumbling with a bottle of booze miles away when the murder was being committed. Unfortunately, Perry was watching from the window of a hospital room where he was recovering from knee surgery. He was taking pain medication, and the courts won’t buy his testimony. There’s only one thing left for him to do. He takes the guy’s case and works to find the real killer. The suspects include the play’s producer played by Law & Order icon Jerry Orbach. Ken and Amy almost mess the whole thing up with their investigation, but Perry always has a trick or two up his coat sleeve.

Pernell Roberts guest stars as Thatcher Horton, who owns a pro basketball and hockey franchise. He’s another one of those cruel and ruthless guys who ends up dead with plenty of people happy to see him gone. Ken is involved when he tries to help a friend renegotiate his contract, and the friend ends up the prime suspect. He goes to Perry for help this time. Suspects include his wife who was cheating on him, a son played by future Star Trek film franchise star Bruce Greenwood, and an ex-tennis pro who has been taking over the operations.

The television movies try to follow the same format as the series, but that’s not entirely possible in a 90-minute format. It’s harder to hold the audience’s attention with the usual courtroom antics and surprises. These films are far more action-oriented than the series ever was. There are car chases, gunfights and plenty of other dangerous situations to hold a more modern audience with less of an attention span than viewers had back in the 1950’s and 1960’s. Of course, the basic idea remains. Perry represents someone wrongly accused of murder and pulls out the ace in the final minutes. Barbara Hale’s work here is far more limited, and there’s an underlined romantic play between them that wasn’t so strong in the series. The iconic theme remains as dramatic as ever.

For some reason volumes 4, 5 and 6 are releasing before 1, 2 and 3 which will arrive in mid-June. We’ll be getting you the scoop on those first six films in June. Until then you can always enjoy a few hours with Perry Mason, “the best defense possible”.

Gino Sassani is a member of the Southeastern Film Critic's Association (SEFCA). He is a film and television critic based in Tampa, Florida. He's also the Senior Editor here at Upcomingdiscs. Gino started reviewing films in the early 1990's as a segment of his local television show Focus. He's an award-winning recording artist for Omega Records. Gino is currently working on his 8th album Merchants & Mercenaries. Gino took over Upcomingdiscs Dec 1, 2008. He works out of a home theater he calls The Reel World. Favorite films: The Godfather, The Godfather Part II, The Body Snatcher (Val Lewton film with Karloff and Lugosi, not the pod people film), Unforgiven, Gladiator, The Lion King, Jaws, Son Of Frankenstein, The Good, The Bad And The Ugly, and Monsters, Inc.
Contest: Win Louder than Words On DVD From Arc Entertainment The Forbidden Girl