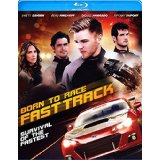 I imagine that distinction — along with one character scolding another for pulling a “Vin Diesel stunt” — is meant to set this straight-to-DVD racing drama apart from the Fast & Furious franchise. That separation is an interesting choice for a couple of reasons. On one hand, I assume it’s been easier to finance any car-centric flick ever since a certain high-octane film series proved there’s an audience for the genre. Then again, the increasingly staggering success of the Fast movies seems to be directly proportional to how ludicrous they’ve become. So by positioning itself as a less outlandish/more grounded alternative, Born to Race: Fast Track seems to be targeting gearheads craving a more realistic racing drama. And, apart from its half-baked cliches and total predictability, it actually kinda succeeds.

When we first meet Danny Krueger (Brett Davern), he’s actually doing the sort of high-wire/high-speed driving along a winding mountain road that the film will later wag its finger at. Danny is the son of a washed-up NASCAR driver and the pride of his small town after earning a prestigious scholarship to the Fast Lane Racing School. More than 3,000 applied, but only eight — including Danny — were accepted in this class.

Once he arrives, however, Danny feels like he’s in over his head against more seasoned competitors from Italy, German, Iowa, and more. His no-nonsense instructors (Corbin Bernsen and Steve Bond) announce the top two finishers will earn spots on a professional racing team and entry into the Lucas Oil Cup. And as if Danny’s slow lap times and struggles weren’t bad enough, he’s reunited with Jake Kendall (Beau Mirchoff), an old rival with whom he shares tortured past.

Born to Race: Fast Track is actually a sequel to 2011’s Born to Race. I didn’t see the original film, but it really doesn’t seem like a requirement to enjoy Fast Track. The sequel alludes to the events from the first film, even though it recast virtually every major character. More importantly, I don’t feel like I needed to see this film’s predecessor because I’ve seen Fast & Furious and Top Gun.

The latter film seems to have been a bigger influence on Fast Track. For example, Danny is almost immediately taunted and terrorized by a pair of arrogant Italian brothers named Enzo and Paolo Lauricello (Diogo Morgado and Alberto Frezza); if I’m not mistaken, “Fauricello” is the Italian word for “Iceman.” There’s also an overriding emphasis on teamwork that feels like a not-so-distant cousin to Dom Toretto’s obsession with his racing family.

To be fair, Fast Track does spend a significant (and admirable) amount of time on the dynamics of a racing team. The sequences on the track — along with anything having to do with the technical side of racing — also have a convincing air of authenticity thanks to the participation of sponsors like MAV TV, Lucas Oil and Pep Boys, as well as cameos from real-life racers like Robert Thorne, Eric Curran, and Chris Rado. Director Alex Ranarivelo, who also directed the previous film, stages some pulse-quickening racing sequences. The acting is generally on the wooden side — it’s hard to make cliched, tough-guy talk sound fresh — but Ranarivelo also allows his young ensemble to find a few pleasingly natural moments. (Like when they’re busting each other’s chops early on.)

Davern and Mirchoff — who co-star on MTV’s Awkward — are new to the Born to Race series and display an easy chemistry with one another. Unfortunately for Davern, he’s saddled with the whinier, more petulant Danny, while Mirchoff gets to show more of a roguish charm. Morgado and Frezza are entertainingly jerky, as is Jesse Luken in an all-too-brief turn as brash Texan Luke LeBow. Besides Bernsen (solid as a crusty mentor), the movie features recognizable actors like Melrose Place‘s Grant Show (one of the few actors reprising his role from the previous film as Jake’s dad) and NYPD Blue‘s Sharon Lawrence (inexplicably turning up for a single scene as the mother of Danny’s girlfriend, played by Nicole Badaan, another holdover from the original).

Not surprisingly, the film mostly veers off course whenever it moves away from the track and lingers too long on Danny’s love life (including a flirtation with a Canadian driver played by Tiffany Dupont). There’s also plenty of well-trodden daddy issues — even the Lauricello’s jerkiness appears to be genetic — and a finish you’ll see coming a (quarter) mile away.

Born to Race: Fast Track is presented in an aspect ratio of 2.35:1. The 1080p image is arrived at with an AVC MPEG-4 codec at an average of 25 mbps. This isn’t a pristine HD image, but I wasn’t expecting one given the grittier racing sequences and relatively low budget. The lack of a flawless sheen actually works in the film’s favor. That being said, there are finer details to be found. (Like beads of sweat on the drivers’ brows during any race.) Colors also pop quite nicely, mostly courtesy of the bold, garish decorations on the cars. (Red, in particular, stands out here.) A few medium shots seem to go a bit soft, and there is some of motion blur during the racing sequences that doesn’t always look intentional. Otherwise, this is a solid — if not quite spectacular — presentation.

The Dolby TrueHD 5.1 track, on the other hand, is a zippily alive and impressive throughout the film. Subs make a quick appearance early on to punctuate the propulsive, dubstep-y music during the opening sequence. But obviously, the real show-off moments come during any racing sequence. Though not quite as detailed and all-consuming as the work on the relatively recent Rush Blu-ray, this track acquits itself quite well with a power and directionality that is both exciting and surprising. It’s all balanced reasonably well with the music and the technical jargon the drivers are spouting during each race.

Fast Track — Behind the Scenes: (7:29) Cast and crew talk about their love of racing and eschewing visual effects in favor of practical stunts. Davern, for one, proclaims that playing a race car driver in this film means he now has an expensive new hobby in real life. Pretty standard stuff, presented in HD.

Born to Race: Fast Track is at its best when it’s giving an inside-baseball look at the world of racing, and it’s got action sequences that (mostly) still obey the laws of gravity. Though it doesn’t offer the same level of outrageous fun, I recommend this if you’ve gotten dizzy from shaking your head at the racing sequences from the Fast movies. (But if you only shake your head at the “dramatic” parts, you should skip this one too because it offers more of the same.)