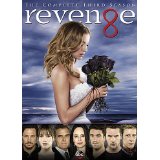 – “Let’s never say the words ‘Carrion’ or ‘Initiative’ ever again.”

“Carrion” was a tedious MacGuffin of a computer program. “The Initiative” was the shadowy, faceless organization responsible for the terrorist attack pinned on the father of Revenge heroine Emily Thorne. Together, they combined to make the sophomore season of ABC’s formerly scorching-hot nighttime soap a tiresome chore. In my season 2 review of the show, I jokingly predicted the word “initiative” would be banned from the season 3 writers’ room. Given that the above exchange occurs less than five minutes into the season premiere, it looks like I wasn’t too far off.

In fact, the only thing missing from that scene was star Emily VanCamp turning to the camera and winking. Season 3 of Revenge brought a new showrunner — Sunil Nayar replaced creator Mike Kelley — and a welcome return to basics. I wouldn’t say the show consistently recaptured the highs of season 1, but it occasionally got tantalizingly close.

Take the now-traditional flashfoward tease of a cataclysmic event; season 3 delivered the best one yet. The premiere opens with Emily (VanCamp) standing on a boat, wearing a wedding dress…and getting shot twice before falling into the sea. In case you’ve never seen the show, Emily is a wealthy, mysterious young woman who arrived a the Hamptons a few summers earlier and proceeded to stealthily rock the lives of the rich and powerful. What they don’t know is that her real name is Amanda Clarke, and she is hell-bent on exacting revenge on everyone who betrayed her father (guest star James Tupper, in flashbacks) and framed him for a heinous terrorist act he didn’t commit. Emily is particularly keen on destroying the devious and regal Grayson family led by Victoria and Conrad Grayson (Madeleine Stowe and Henry Czerny.)

Season 3 opens with Emily engaged to Grayson golden boy Daniel (Josh Bowman). Emily also revealed her true identity to bitter childhood friend Jack Porter (Nick Wechsler), who threatens to expose her if she doesn’t wrap up her destructive revenge plot by the end of the summer. The eventful season premiere also introduces us to Victoria’s long-lost son Patrick (Justin Hartley), gives Conrad a health crisis that forces him to consider confessing his many sins, and jettisons a former series regular who had long outlived her usefulness on the show (buh-bye, Ashley Madekwe.)

This being Revenge, there were naturally some ludicrous twists and turns throughout this season, including a fake pregnancy, temporary amnesia, and inconvenient blackouts. At times, it also felt like Revenge might’ve been a little too eager to please; the return of Emily’s red Sharpie in Ep. 19/”Allegiance”, for example, was treated as a momentous occasion and felt a bit too fan service-y. But despite all the delicious insanity — admittedly, the temporary amnesia was fairly dumb — the reason the show rounded into form again was shockingly simple: season 3 pitted Emily squarely against the Graysons from beginning to end.

Emily is less passive aggressive and more “aggressive aggressive” this season, which allowed for some tremendous showdowns between VanCamp and Stowe, who delivers withering glances and putdowns as well as anyone on TV. Even Bowman gets in on the action about halfway through the season after Daniel discovers some of Emily’s betrayals. His Daniel is darker and more obnoxious than ever, and the actor appears to be having a blast spewing on-screen venom at VanCamp. (The two actors are a couple in real life.) Gabriel Mann’s techie sidekick doesn’t have quite as much to do this season, but he’s always ready with a great, knowing quip.

On the flip side, Christa B. Allen’s Charlotte Grayson is kind of the new Ashley; the character that has little to do on this show beyond standing around looking pretty. Meanwhile, Hartley is fairly horrendous as Patrick, who recurs throughout the season. The actor seemed to struggle with the heightened, soapy dialogue, which led to some consistently painful line readings. Then again, Hartley was shirtless about 45 percent of the time he was onscreen, so fans of the show probably weren’t listening to what he was saying anyway.

In addition to Hartley, season 3 guest stars included Karine Vanasse (as Margaux, a French, upper-class love interest for Jack and/or Daniel), Olivier Martinez (as Margaux’s domineering father), Gail O’Grady (as Conrad’s first wife and — this being Revenge — someone else’s long-lost relative) and the return of a pair of recurring characters from past seasons. Besides the housecleaning season premiere, standout episodes include Ep. 10/”Exodus” (we find out who shot Emily) and the final handful of episodes, which has Victoria zeroing in on Emily’s true identity and culminates in a characteristically bananas finale. The final episode, titled “Execution”, features key deaths (yes, plural), a stunning return, one character winding up in a mental hospital, and another one framed for murder. In other words, another day at the Hamptons for this crew!

Revenge: The Complete Third Season features all 22 episodes on five discs. All of the special features — including deleted scenes, a finale commentary, and a gag reel — can be found on Disc 5. The best of the bunch is “Table for Five,” a roundtable discussion with the show’s genial male cast members that doubles as a sendoff for the two actors whose characters were killed off. Season 4 premieres Sunday, Sept. 28, and I’m interested to see which version of Revenge we’ll get. Based on this batch of episodes, it seems as if writers and producers pay attention to their fans and try to give them more of what got them hooked on this show in the first place.