Posted in: No Huddle by Brent Lorentson on October 13th, 2014 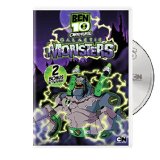 With the month of October in full swing, it comes as no surprise to see Halloween-themed episodes popping up.  With the new DVD of Ben 10: Galactic Monsters, sure, it’s a cash grab for the holiday season, but thankfully on this release we get a set of fun episodes that are a bit of a departure from the average episodes.  It’s not that I dislike Ben 10, but it’s a show I enjoy in small doses; after all, too much of anything can always be a bad thing.  But thankfully, with the average five-episode release we get on the DVD from Cartoon Network, it has just the right amount of episodes to please everyone.

With the opening episode Rad Monster Party, the stage is set for this three-episode arc we have on the DVD where Ben and his fellow Plumbers (basically a term for their secret group of alien fighters) crash on Inner Transyl, a planet filled with monsters.  Old-school monster fans will have fun with these episodes where we get the Cartoon Network version of some of the classic Universal monsters.  This is first episode works as an introduction to the main villain we will follow for this three episode arc, The Scare.  It’s fun seeing Ben have to do battle up against a supernatural figure rather than the run-of-the-mill alien we are used to seeing, but unfortunately the episode still follows the same formula we see in just about every Ben 10 episode.

The second episode Charmed, I’m Sure continues the adventures on the Inner Tansyl, and, well, this time we see the ghoulish side of Ben Tennyson as he is covered in zits.  Though Ben may be freaked out by his new look, he now fits in with the monsters that rule the planet, and they no longer feel the need to kill him.  This episode comes with two sequences that were just so much fun, the first involving Ben and his team taking on hordes of Scarecrows, and the other being a twins reference that fans of The Shining will catch.

As for the third and final episode of the Inner Transyl arc, we get The Vampire Strikes Back, where The Scare brings back a long-dead vampire foe to team up with and hopefully conquer the universe together.  With the title I couldn’t help but hope for more of an Empire Strikes Back spoof, and though we get some solid references (a character being encased in a tomb), I still had hoped for more.

Added on to the DVD are two bonus episodes; of the two, Mystery Incorporeal is the one that tickled my geek bone as this was obviously a riff on the old Scooby Doo episodes.  Here Ben visits his older sister who is a crime fighter under the name “Lucky Girl” and is solving crimes how you’d imagine Velma would if she had access to some high-tech superhero toys.

If you are looking for a DVD that steps away from the average formulaic approach to each episode, Galactic Monsters offers up a fun, fresh look at a series that I wish we saw more of.  The dialog is filled with humor for all ages, but nothing you’ll feel concerned about your younger kids watching.  Despite some older film references, this is a show for the kids unlike other shows like Regular Show that clearly is appealing to an older audience.  There’s nothing to scary here, and this is a fun way to get into the Halloween and monster movie spirit.  I’m sure everyone will have a ghoulish good time with this one.

Brent Lorentson is a horror writer and film critic based out of Tampa, Florida. With a BA in Digital Film, he co-wrote and co-directed Scavenger Hunt. His short stories have appeared in various horror anthologies. In 2019 his short script Fertile Blood will be a part of the anthology horror film Slumber Party. He is currently working on his first novel A Dark and Secret Place set to be released in late 2019. Favorite Films: Taxi Driver, Fight Club, I Saw the Devil, The Wild Bunch, Dawn of the Dead, A Clockwork Orange, Pulp Fiction, Heathers, The Monster Squad, and High Fidelity.
Duck Dynasty: Season 6 (Blu-ray) 2 Broke Girls: The Complete Third Season