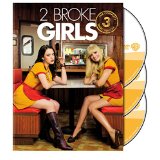 Everyone on TV has nicer clothes and a bigger home than you do. And I’m not just talking about fictional doctors or lawyers. Even small-screen characters with relatively modest incomes manage to live in palatial apartments. Need proof? The 2 Broke Girls in CBS’s hit sitcom have an apartment that is literally big enough to fit a horse. (Hi, Chestnut.) Season 3 brings a new pet (Ep. 3/“And the Kitty Kitty Spank Spank”) and briefly threatens to remove Max and Caroline from their home (Ep. 22/“And the New Lease on Life”). I don’t think I’m giving anything away by saying things work out in the end. By now, the show’s crass predictability has become oddly comforting.

Max Black (Kat Dennings) and Caroline Channing (Beth Behrs) are best friends, despite the fact that they appear to be polar opposites. Caroline — the disgraced daughter of a jailed Ponzi schemer — is blonde, skinny and chipper. Max — the street smart survivor who seems to have a million jokes about her deadbeat mom and unidentified dad — is dark haired, busty and sour. The two are surrounded by their wacky, warped surrogate family at the Williamsburg Diner in Brooklyn.

Diminutive diner owner Han (Matthew Moy) continues to be the never-ending butt of jokes about his height and (lack of) masculinity. There’s also paternal cashier/lovable ex-drug addict Earl (Garrett Morris) and pervy cook Oleg (Jonathan Kite), who can turn anything into some sort of sexual innuendo. (For example, he’d absolutely make an “in-your-end-o” joke about my previous sentence.) Finally, there’s larger-than-life upstairs neighbor/diner regular Sophie Kaczynski (Jennifer Coolidge), who consistently shows up to support Max and Caroline’s dreams, insult Caroline, and snack on some cupcakes.

Season 2 ended with the Girls scaling back their original cupcake shop ambitions after a bump in the road. The new season sees them debuting their new cupcake window in the secret room they discovered at the back of the diner. It’s a wise move that allows the two main characters to continue to work toward their ultimate goal without taking them too far away from the rest of the ensemble. There’s still a mid-season arc where Caroline convinces talented baker Max to follow through on her dreams to attend pastry school. Naturally, they each meet potential love interests: Caroline falls for hunky instructor Nicolas Saintcroix (Gilles Marini), while Max forms an instant bond with fellow troublemaker Deke (Eric Andre).

Of course, the (caustic) heart of the show is still the relationship between Max and Caroline, which is greatly aided by the undeniable chemistry between real-life best friends Dennings and Behrs. The Girls continue to develop, at least to the extent that a show with myriad weed jokes (Max and Earl), penis jokes (Oleg), no-penis jokes (Han), boob jokes (Max and Sophie), and no-boob jokes (Caroline) can feature “character development.” Caroline still desperately clings to traces of her old, privileged life, but is now amusingly resigned to her new, Broke reality. (There’s a nice joke about how her health plan now consists of Flintstones chewables.) Max is actually the one who takes several significant leaps forward, uttering the words “I love you” twice this season, and working her way toward two different diplomas.

To be fair, you kinda have to squint to see these bits of growth since the show is largely populated by one-liners that are either groan-inducing (“What the shell is wrong with you?” as Max struggles to bake a tart), sneakily dirty for a network sitcom (“She just had her carpet steam cleaned”), or both. Creators Michael Patrick King and Whitney Cummings also continue to take merciless aim at self-involved hipsters and trends like Kickstarter, catfishing, and cronuts. Many of the jokes are as stale as the food in the Williamsburg Diner, but the cast delivers them with familiar gusto.

Dennings gets most of the best one-liners, which she alternately fires off with sarcastic, sadistic glee and intense disinterest. Behrs has the more thankless part, as Caroline endures an endless string of indignities. Season 3 has Caroline falling into a pile of garbage (again) and getting peed on by a homeless man, but the actress soldiers on with impressive aplomb. Coolidge continues to be a valuable scene-stealer; she’s the one performer who totally embodies (and owns) the show’s loudness and crassness.

The season’s recurring players also get to play to their strengths. Marini (a former Dancing with the Stars competitor) gets to tango and spend an inordinate amount of time shirtless. Andre gets to use his smart-aleck comic charms to gel with Max. And Mary Lynn Rajskub (24) brings her own off-beat rhythms to Bebe, a neurotic pastry chef with severe anxiety disorder. Barney Miller star Hal Linden pops by as (naturally) a lecherous old man who threatens to displace Max and Caroline in “And the New Lease on Life.” The one glaring false note was a guest appearance by Lindsay Lohan, who plays a flighty bride-to-be in Ep. 21/“And the Wedding Cake Cake Cake.” Besides making a knowing joke about not wearing underwear, Lohan — a promising star a decade ago — doesn’t get much to do.

It seems that Lohan was just an appetizer. Season 4 will debut Oct. 27 and feature a guest appearance by none other than Kim Kardashian, the butt (sorry) of many of the show’s jokes. 2 Broke Girls: The Complete Third Season features all 24 episodes on three discs. The only special features are a gag reel and almost 19 minutes worth of deleted/unaired scenes. If you’re interested in the show, you can either pick up this set or start watching the new season when it premieres later this month. For better and worse, 2 Broke Girls is not terribly complicated. “I know how this works by now.”