Posted in: Disc Reviews by Brent Lorentson on October 13th, 2014 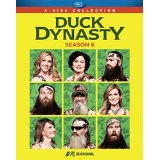 It’s that time of the year again to dust off the old hunting rifle and shake out the camouflage suits, because Duck Commander is back in action.  Duck Dynasty comes to Blu-ray on its sixth season, and I am just about certain it is time the quack pack has hung up their camo and walked away from their television careers.  The show has had a good run, but with this current season it is clear the show has run its course, and it is time the Robertson’s should make a graceful exit while their ratings are still strong.

The biggest problem with season six is that it fails to have the charm of what made the early seasons so much fun.  Dare I say it is because the Robertson clan has simply become too Hollywood, and it has become nothing more than one character to the next simply mugging for camera time, or perhaps the ridiculous nature of the “plots” for this season.

Whether it’s the mayor paying a visit to Duck Commander headquarters or the boys getting to play firefighter for the day, the show has completely lost its appeal for me.  No longer is this a show that attempts to be a day in the life of these duck call makers, but instead it has officially become formulaic TV.  It gets worse when we see Willie sit in his daughter’s karate class.  It took all I had in me to not shut off the TV and power through this episode as Willie clowns his way through the class.  It is one thing to play things up for the camera, but this was becoming so forced viewers should be able to file assault charges for these annoying antics.

Even worse, we have the show returning to the well as Jeb’s daughter goes on her first date, where we get to see Jeb be the overprotective dad.  It’s not much different from the episode where Willie takes Sadie’s boyfriend hunting, only instead of guns, its Jeb with a putter in a game of miniature golf.  The most nonsense moment of the series may have to go to a moment where Jeb takes some of the Robertson women out “rolling” (toilet-papering a house).  This would be amusing if not for the fact this seemed to be one of the most staged moments of the series, and it was just a joke that fell flat.

Thankfully the show has Jase and Uncle Si to carry it despite the numerous slumps of the season.  Between Jase taking his son out frog hunting the night before graduation so he can impart some fatherly advice for his son about the future and an episode with Jase organizing Willie’s birthday party, Jase is finally a character to take seriously now.  As for Uncle Si, though he may have less screen time this season, it did make the time he was around all the more enjoyable; unfortunately I believe this is a character who has simply fizzled out.

Though the show is still holding strong with the ratings, I think it is about time the network begins to plan an exit strategy for the show to help end things on a high note.  While this is still one of the only reality shows on TV that is worth watching, all good things need to come to an end.  Hopefully the show can take its cue and leave on a high rather than dwindle and become an obscene mockery of itself.  The show continues to have heart, but there just wasn’t enough of that this season to amount to much.

Duck Dynasty Season 6 is presented in its original aspect ratio of 1.78:1.  The 1080p image is arrived at with an AVC MPEG-4 codec with an average of about 27 mbps.  For a reality show, the picture here looks really good.  Granted, many of the shots are preset, and I’m certain there is a fair amount of lighting at play to bring out some beautiful shots.  Throughout the show we are given numerous beautiful exteriors while the guys are out and about, though at times the image does seem a bit soft. For the most part, though, the images look sharp and not overly saturated.  The production teams seems to have gone a bit overboard with the slo-mo transition shots, but at least they are throwing in new footage instead of relying on stock clips.

The DTS-HD Master Audio 2.0 track is a bit underwhelming, but considering this is a reality show, expecting the bells and whistles and a robust sound design is asking a bit much.  What does come through surprisingly enough is the ambient noise of the swamp, which does add extra warmth to the scenes. This is only a 2.0 track, but aside from this episode everything is relatively standard with the previous releases.

Featurettes: (19:11) Well, this was a bit of a letdown.  Instead of real bonuses, what we get are a series of recaps of episodes through the season, and some that have clips from previous seasons.  Really this is just a wasted bonus.

Deleted scenes: (10:52) Most of these scenes it is understandable why they made it to the cutting room floor, but the first scene is actually one of my favorites of the season.  Basically it’s the Duck Commander boys out to lunch; Jase gets worried because Si has been in the bathroom for a while, and the boys discuss their issues with public restrooms.  The show needs more of this; this is what the earlier seasons felt like, and it was so much more natural and the humor presents itself in a more genuine way.

Season 6 is a season that really has me hoping they will pull the plug on this show unless it gets back to how it was in its first season.  It had a good run, but all good things must come to an end. But if the show were to ease up on the big productions and be more like its early days, I’ll try to keep an open mind.

Brent Lorentson is a horror writer and film critic based out of Tampa, Florida. With a BA in Digital Film, he co-wrote and co-directed Scavenger Hunt. His short stories have appeared in various horror anthologies. In 2019 his short script Fertile Blood will be a part of the anthology horror film Slumber Party. He is currently working on his first novel A Dark and Secret Place set to be released in late 2019. Favorite Films: Taxi Driver, Fight Club, I Saw the Devil, The Wild Bunch, Dawn of the Dead, A Clockwork Orange, Pulp Fiction, Heathers, The Monster Squad, and High Fidelity.
The Judge “31 Nights Of Terror” Ben 10 Omniverse – Galactic Monsters