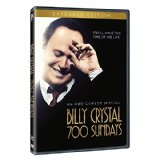 Billy Crystal has built a legendary career as one of the most multi-faceted entertainers in all of showbiz. He’s a successful actor, comedian, writer, producer and director. At various points, Crystal has been a major star on television, on stage, and at the movies. He’s entertained everyone from musicians to movie stars, thanks to his gigs as a three-time Grammy host and nine-time Academy Awards emcee. But what works best about his return to the stage in 700 Sundays — Crystal’s Tony-winning one-man show — is how it illustrates the idea that virtually every entertainer gets his or her first round of applause in the family living room.

Crystal originally brought the autobiographical 700 Sundays to Broadway in the mid-2000s. A year ago, he reprised the role he was born to play for a limited two-month engagement at the Imperial Theatre. One of those performances was filmed and aired as an HBO special earlier this year.

The show largely covers Crystal’s early family life, eschewing his major successes as an entertainer. The title refers to the estimated number of Sundays Crystal shared with his father Jack, who died of a heart attack when Billy was 15. I was actually pretty worried at the very beginning. The show opens with a pre-taped bit that has Crystal wistfully wandering around an empty house that is supposed to represent the Long Island home his family bought in 1953. It’s such a maudlin, overly sentimental start to the show that I half expected it to be a joke.

Once Crystal appears on stage, however, his self-deprecating charm and force-of-nature personality take over. The comedian is 66, but performs with the energy and enthusiasm of someone who is decades younger. Unfortunately, he also continues to stubbornly cling to the unnaturally dark hair of someone who is decades younger. Act I of 700 Sundays has Crystal running through the expected jokes about his thrifty Jewish family (complete with gassy, cigarette-y impersonations of relatives, and a shabby Plymouth Belvedere that is practically a character in itself), as well as his well-documented love of baseball and jazz.

Throughout most of Act I, Crystal has a musical rhythm to his delivery that recalls his Muhammad Ali impersonation. The rhythm also makes sense when you consider Crystal’s father and his uncle Milt Gabler were major figures in the world of mid-20th century jazz. Gabler operated the Commodore Music Shop, which led to Commodore Records, the music label that was eventually passed to his brother-in-law Jack Crystal. As a result, young Billy Crystal fell in love with jazz and is able to tell great stories like the one that had him seeing his first movie with Billie Holliday. It was Shane (co-starring Crystal’s future City Slickers cohort Jack Palance), and it was the moment Billy realized he could be 40-feet tall on screen since playing for the New York Yankees probably wasn’t going to work out.

Even though Act 1 ends with young Billy’s epiphany that he wants to be a comedian after watching a Catskills comic work a room, the second act of 700 Sundays curiously has Crystal dropping most of the shtick. Act II still has some humorous moments — like the one-liner about discovering both comedy and his penis at age 15 — but the standout sequence has him detailing his father’s sudden, shocking death. (The Plymouth Belvedere died shortly after as well.) Crystal recounts his regret about arguing with his father over homework during their last conversation. He also vividly and emotionally recalls the moment his mother broke the tragic news, and his vow to take care of her. Lest the show get too sad and weepy, Crystal runs through his high school years — including an amusing anecdote about being comically overmatched in a high school basketball game — and meeting future wife Janice in college. The show concludes with Crystal’s chronicle of his mother’s 2001 death, which (naturally) includes jokes about showbiz and the Yankees.

You can probably accuse the show of being self-indulgent, but what the heck do you expect from a one-man show? Almost all of the humor is baby boomer-centric, but (again) what the heck do you expect from a one-man show starring Billy Crystal? HBO has released 700 Sundays as an “Extended Edition” DVD that clocks in at 134 minutes. I never saw the version that aired on HBO, so I can’t say for sure what accounts for the bonus material. (Make sure you stay a little past the end credits for Crystal’s quick tribute to the Imperial Theatre and the legendary Zero Mostel.) There were certainly instances where some of Crystal’s bits — speaking Yiddish, re-enacting a family home video, or (especially) impersonating that gassy grandpa — could’ve been trimmed down quite a bit. Crystal nevertheless succeeds in fully capturing the audience’s attention, with only a modest set meant to represent the exterior of his childhood home for company. (Director Des McAnuff also sprinkles in some well-timed family photos and home video footage throughout the show.)

If you’re looking for a dishy survey of Crystal’s remarkable career in show business, you’ve come to the wrong place. Instead, 700 Sundays is a funny, poignant love letter to Jack Crystal and the rest of the comedian’s eccentric clan.