Posted in: No Huddle by Archive Authors on October 24th, 2014 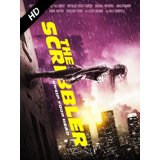 Here’s a young adult targeted DVD that’s based on a graphic novel called The Scribbler. Perfect for those who want to cozy up on Halloween night, this science fiction thriller has a wicked tone and some ghoulish ghastly scenes. Actually, it’s very well acted for a low-budget indie, and the special effects are also a treat. The story gets kinda funky and way off the wall, but that’s what science fiction’s all about.

In the interrogation room at a local police station, Suki (Katie Cassidy) a young woman diagnosed with dissociative identity disorder, is being interrogated by Detective Moss (Michael Imperioli) and criminal psychologist Jennifer Silk (Eliza Dushku). They are trying to find out if she is responsible for several killings at Juniper Tower, a halfway house for the mentally and socially incompetent.  The killings have been mostly suicides, but look suspicious.

Suki tells her side of the story starting with her transfer to Juniper Tower and her room located on the 16th floor.  It’s her first time in the tower, and as she climbs the stairs to her room she meets Emily (Ashlynn Yennie), who’s psychologically ill, diagnosed with pathological fear of clothing. After a quick greeting she talks to Cleo (Gina Gershon), a bipolar sex addict who gives her the lowdown on most of the patients in the tower.  She arrives at her floor, gets settled into her room and gets a knock on her door by the only male in Juniper Tower, Hogan (Garret Dillahunt). He’s the resident sex addict who denies his need for sex. He does, however, admit that he keeps all the women at the facility happy.

She settles in with her Siamese Burn Box given to her by Dr. Sinclair (Billy Campbell), a device that will eliminate eight of the nine personalities that inhabit Suki’s brain.  With each jolt one of the people living inside her gets destroyed. Director John Suits provides the sets, costumes, special effects and makeup for the script, but it’s the professional talent he has brought together that makes the film work.  Each of the characters has a disorder and they come off the screen effectively and believably. Controlling the action every step of the way, Suits sets up future results of interaction early on by his characters.  He works in some nice twists to keep the film unpredictable and works in other characters just when you think you have it all figured out.

Giving Suki an extreme off-kilter personality, it’s hard to take your eyes off of Katie Cassidy.  Her Suki is inquisitive, evasive, demanding, sexy and yet menacing at times depending on the personality taking over.  As she kills off each person in her brain she seems more in control, until it’s between her and the scribbler.  Her arch nemesis is Alice (Michelle Trachtenberg), a dominatrix type who tries to trip up Suki every time she can.  Trachtenberg gives Alice a very morbid outlook on life and pushes Suki to fail in her recovery.  She’s obviously one to avoid while at Juniper Tower, but that’s not easy to do since she moves around the building stealthily and mysteriously.

The Scribbler has been rated R by the MPAA for violent images, some strong sexuality/nudity, and language.  Most of the repetitious nudity is gratuitous, and the sex is very graphic.  There are also scenes of realistic suicide that may be unsettling for those who are squeamish.

Nice composition and interpretation of a story from a graphic novel.

“31 Days Of Terror” Life After Beth (Blu-ray) The Mentalist: Season 6