Posted in: Disc Reviews by Brent Lorentson on October 23rd, 2014 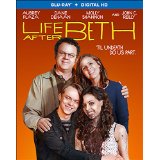 Imagine if you had a second chance to tell that loved one you lost how much you loved them, or were able to do the things you wished you had done the first time, but you hesitated because you didn’t take into account the fragility of life.   Life After Beth shows us the joys that can come with when getting that second chance while at the same time revealing the dark consequences that may come with this new opportunity.  There are numerous zombie films and series out in the market, but Life After Beth may be the most unique take on the genre in some time.

Zach (Dane DeHaan) is a grief-stricken young man who is suffering from the tragic loss of his girlfriend Beth (Aubrey Plaza).  All he can think about is how the two had last talked and it had been on bad terms and how losing her only seems to have made it clear how much he truly loved her.  Her parents (played by John C. Reilly and Molly Shannon) as you’d expect are taking the tragedy badly.  The parents take Zach in; after all, he seems to be the only one who can seem to understand the kind of pain they are going through.  Back home Zach’s family couldn’t be more opposite and border on insensitive; besides, to Zach no one can seem to understand the pain, loss and guilt that he is feeling.  But all this changes when by some miracle Beth returns from the grave.

Beth isn’t like your typical zombie; in fact she’s nothing like the rabid flesh-eating maniacs we have gotten used to seeing.  Instead, she’s no different from the Beth Zach and her parents cared about before her demise, despite a little bit of memory loss.  How Zach and her parents approach her return is what makes the film relatable; sure, there is joy in seeing this returned loved one, but of course nothing good has ever come from someone returning from the dead.

I couldn’t help but see some similarities to The Monkey’s Paw and the consequences of getting what you ask for.  As we see Beth go from the sweet young woman Zach and her parents remember to her eventual transformation into a monster, the one thing that jumped out of the screen at me is how entertaining Aubrey Plaza is to watch in this film.  Watching her turn on her charm and in an instant become this vile creature sputtering profanities or viciously attacking someone is actually a joy to see.  There are several great comedic performances here not just from DeHaan, Reilly and Shannon, but Paul Reiser and Anna Kendrick.

Considering the amount of zombies filling both the small and large screens and how far the makeup effects have come, I appreciate the unique approach the film takes with Beth as well.  We get to see a full transformation over the course of the film, going from a subtle blemish in her skin to full-blown flesh-eating monster.  Thankfully throughout this entire transformation we still get the humanity of Beth instead of them going for a full gross-out look.  After all, we should be on board with why these characters still love and want to hold onto Beth and the memory of her, rather than want to reach for the closest weapon and dispatch her.

For writer/director Jeff Baena this is his first time behind the camera, at least for a feature film, and this is the end result most first-time filmmakers hope to achieve.  We get a nice blend of family drama, dark comedy and horror, and everything just falls into place with this script. Baena makes the right call to never depict Beth as anything but a sympathetic character; even in her moments of violence we always understand that it’s never Beth’s intention to cause harm, but instead it is what is transforming inside her.

I wouldn’t classify this as horror, but it is definitely more than a simple comedy.  Like Shaun of the Dead and Warm Bodies, this is a zombie film that struggles with the humanity of what is occurring when the dead decide to walk the Earth once again.  This is a zombie film for the ones who don’t like the typical zombie flesh-eating films. It’s a movie you can curl up with the ones you care for and let it be a reminder that it’s only too late to say what you feel for that loved one when they are toe-tagged and in the ground…that is, of course, till they come back.

Life After Beth is presented in an aspect ratio of 1.85:1.  The 1080p image is arrived at with an AVC MPEG-4 codec at an average of 22 mbps.  The film has a very warm look it.  In many ways this is shot more as a romantic comedy rather than a horror film.  Because of the style they went with, the film comes across as looking very plain and is missing depth in its visual aesthetic. There is plenty of detail captured here, most notably the nice makeup job as we see Beth decay before our eyes.  There were no digital artifacts or any transfer issues that I could spot.

The DTS-HD Master Audio 5.0 mix is about what you would expect from a typical comedy.  The dialog is clear throughout.  As the film progresses and zombies start to rear their heads we get a variety of background noise ranging from pedestrians screaming to gunfire that really pops.  The score was relatively unremarkable; if someone were to play it for me now, I wouldn’t recognize it.

Audio Commentary: Writer/Director Jeff Baena is joined by several of his cast members in a commentary that isn’t just informative but also pretty entertaining from start to finish.  Everyone has a good chemistry on this track, which helps make this an enjoyable listen.  Here we get to listen to what inspired the project as well as how everyone got involved.

Life After Beth: Post Mortum: (15:48)  I was a little let down by this feature; I was hoping for some behind-the-scenes footage, but mostly all we get here is the director and his crew discussing how great everyone is in the film.

Deleted Scenes: (19:45) There is a lot of footage that made its way to the cutting room floor.  Here we get to see Zach with his band mates in a couple scenes.  I wish these scenes had made their way into the film; just about every deleted scene I feel could have stayed in the final cut.  I understand you need to make edits for time, but I think there could have been a stronger film if these had remained.  We get a few scenes that also hint at Beth’s return from the grave; to some these might be a bit much, but I feel they still work, and I’d love to see an extended cut with these scenes placed back into the film.

As a zombie film, Life After Beth breaks all the rules, and for once I actually don’t mind that it dares to be something different.  This film has a lot of heart and plenty of humor to keep non-horror fans distracted from the fact they are watching a horror film.  This is a film that in time I’ll bet will develop a solid cult following.  For those last-minute shoppers looking for a Halloween costume, there is still time to put together a zombie Beth costume.

Brent Lorentson is a horror writer and film critic based out of Tampa, Florida. With a BA in Digital Film, he co-wrote and co-directed Scavenger Hunt. His short stories have appeared in various horror anthologies. In 2019 his short script Fertile Blood will be a part of the anthology horror film Slumber Party. He is currently working on his first novel A Dark and Secret Place set to be released in late 2019. Favorite Films: Taxi Driver, Fight Club, I Saw the Devil, The Wild Bunch, Dawn of the Dead, A Clockwork Orange, Pulp Fiction, Heathers, The Monster Squad, and High Fidelity.
“31 Nights Of Terror” Contest – About a Zombie From Revolver “31 Nights Of Terror” Scribbler