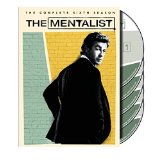 The Mentalist was once the highest rated drama on television. There was a lot to like here, as I’ll discuss throughout this review. But I think most of us had gotten a little sick and tired of the Red John story. The show milked the single case for over five years, and the fan base had dissolved to the point that the once #1 show has been on the bubble for the last two seasons. Next year it will return, but only as a January mid-season replacement, a place many shows begin their lives. Fans’ patience has worn thin, but at long last the show’s producers discovered what we’ve known since the second season. It’s time to get Red John gone and move the show in another direction. If the show was going to survive, it was now or never. What you likely didn’t see coming was a two-year jump in time and a retooling in the middle of an ongoing series. More on that later. Let’s get you up to date first, shall we?

Simon Baker stars as Patrick Jane, a psychic who was riding high bilking folks out of their hard-earned money by playing on their desires to contact their deceased loved ones. He justified his con as providing closure for his marks and never looked back. That is, until one day he makes a fatal mistake. He never fooled himself into believing any of it was real. He wasn’t psychic. He just paid close attention. While working with the police to solve a serial killer case, he arrogantly demeans the murderer, known as Red John, on a television show. It was all chuckles until he gets home and finds that he made Red John so angry that he killed his wife and young daughter. Driven by guilt and a desire to avenge his family’s death, he abandoned his con game and decided to use the observational skills that allowed him to play a psychic to assist the California Bureau of Investigation, a sort of state-based FBI, to solve murders. He’s not a cop, but consulted with a tough-crimes division that answers directly to the state’s Attorney General. As he put it, “No gun. No badge. They don’t even give me dental.” While he’s shed his psychic persona, Jane is still incredibly full of himself. Jane is also deeply disturbed, although he hides it well. He still sleeps in the bedroom where his wife and daughter were killed. He never covered the red smiley face Red John drew at his crime scenes to taunt him in the victims’ own blood. A little Helter Skelter meets Barney.

Simon Baker is one of those actors who never appear to be working very hard at all. Like his Guardian character, he plays Jane as somewhat soft-spoken; incredibly arrogant, but soft-spoken. His movements often appear slow-motion and deliberate without much effort. He never seems to waste a movement. He fits the role extraordinarily well, because his presence is so disarming and almost hypnotic by itself. I’m still not quite sure if the actor has much of a range, but when a part fits, it does so snugly. And The Mentalist fits.

The season begins with very much the same story. Jane and his crew appear close to finally getting to Red John. Before you go into your annual Red John coma, I have incredible news. It only lasts eight episodes. In Red John, Jane finally gets his revenge. Red John is dead, but there’s a lot of damage left in the wake. Jane flees the country, now wanted for murder. The CBI has been disbanded because of its corrupt leader, and our characters have all gone their separate ways. Lisbon (Tunney) is now the sheriff of a small town. Rigsby (Yeoman) and Grace (Righetti) are married with kids and running their own security firm. Cho (Kang) has joined the FBI. Jane is on a tropical island with no extradition.

The ninth episode finds the FBI on Jane’s trail, but not to bust him. They want to offer him immunity to work for them now. Of course, there’s the expected negotiations and Jane playing games to get what he wants. Of course, he does. His demands include bringing Lisbon on the team. This is your new The Mentalist line-up. Jane, Lisbon and Cho return. Rigsby and Grace get a nice couple of episodes to resolve their stories and have now left the show entirely.

There are, of course new members of the retooled team. Rockmond Dunbar joins the team as FBI Agent in Charge Dennis Abbott. He’s the new boss. Naturally, he has no idea what dealing with Jane is going to be like. He puts up the hard no-nonsense front, but you can guess just how far that’s going to lead him. Emily Swallow joins as Agent Kim Fischer, the bait used to originally lure Jane back. Finally, the team now has the requisite technology geek in Agent Jason Wylie, who doesn’t understand why his nickname is The Coyote. Obviously he didn’t watch a lot of cartoons as a kid. He’s played by Joe Adler. With this new cast the team operates out of a special unit of the FBI. They are headquartered in Austin, Texas but go anywhere in the country.

The episodes have now become more procedural formula than before. Baker continues to dominate, but there are some changes in the character that I think have watered him down just a touch. Obviously, everyone is finding their new leg, and I’ll miss Righetti most of all. She was always somewhat underused, and the Wiley character has pretty much filled her role but not her talent.

The romantics in the fan-base will be pleased with how the series winds its way toward the season finale. Lisbon falls for another agent, and the two of them get serious enough to think about moving to D.C. together. Now Jane will have to decide just how he feels and if he can bring himself to do anything about it. If you watch Castle, you’ve seen almost this exact scenario finish two seasons ago on that series.

This is very much a transition season. It’s awkward at times and appears to deliver a perfect series/season finale in the middle of the run. When you watched them weekly, the change might have felt smoother. Watching the shows back-to-back creates an odd atmosphere that took me several episodes to resolve. Eventually I adapted to the new order of things. Rumor has it that the show will experience another time jump when it begins again. That should prove interesting. There might even be another adjustment to the format. Only a few more months of time will tell all. Next year in January we’ll find out if the fans can adapt or new fans can be found. If not, it’s likely the last we’ll see of Patrick Jane. “See, you know that because your instincts told you.”

Gino Sassani is a member of the Southeastern Film Critic's Association (SEFCA). He is a film and television critic based in Tampa, Florida. He's also the Senior Editor here at Upcomingdiscs. Gino started reviewing films in the early 1990's as a segment of his local television show Focus. He's an award-winning recording artist for Omega Records. Gino is currently working on his 8th album Merchants & Mercenaries. Gino took over Upcomingdiscs Dec 1, 2008. He works out of a home theater he calls The Reel World. Favorite films: The Godfather, The Godfather Part II, The Body Snatcher (Val Lewton film with Karloff and Lugosi, not the pod people film), Unforgiven, Gladiator, The Lion King, Jaws, Son Of Frankenstein, The Good, The Bad And The Ugly, and Monsters, Inc.
“31 Nights Of Terror” Scribbler “31 Nights Of Terror” Exclusive Interview With Sarah Butler