Posted in: Podcasts by Gino Sassani on October 25th, 2014 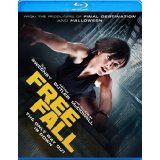 Most of you know Sarah Butler from her strong performance in I Spit On Your Grave. The remake might have gotten mixed reviews but Butler’s strong showing has helped to create a promising career. In Free Fall she gets to work with Halloween producer Malek Akkad and screen legend Malcolm McDowell. I had a chance to chat with Sarah about the new film coming October 28th from Anchor Bay. She’s got tons of energy and our time together was far too short to ask everything I had hoped. Bang it here to listen in on my chat with Sarah Butler.

Gino Sassani is a member of the Southeastern Film Critic's Association (SEFCA). He is a film and television critic based in Tampa, Florida. He's also the Senior Editor here at Upcomingdiscs. Gino started reviewing films in the early 1990's as a segment of his local television show Focus. He's an award-winning recording artist for Omega Records. Gino is currently working on his 8th album Merchants & Mercenaries. Gino took over Upcomingdiscs Dec 1, 2008. He works out of a home theater he calls The Reel World. Favorite films: The Godfather, The Godfather Part II, The Body Snatcher (Val Lewton film with Karloff and Lugosi, not the pod people film), Unforgiven, Gladiator, The Lion King, Jaws, Son Of Frankenstein, The Good, The Bad And The Ugly, and Monsters, Inc.
The Mentalist: Season 6 “31 Nights of Terror” Deliver Us From Evil