“31 Nights of Terror” Deliver Us From Evil 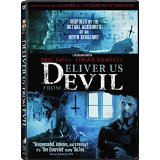 “Inspired by the actual accounts of an NYPD sergeant.”

Deliver Us From Evil comes attached with what may be the most flowery variation yet of the “Based on a True Story” tag I’m always wary of. The deliberately-worded phrase is designed to lend an air of verisimilitude to the inherently supernatural demonic possession genre. (Not unlike what The Conjuring did with its real-life paranormal investigators on its way to becoming a smash.) While Deliver Us From Evil has a few decent jolts, it doesn’t come close to capitalizing on the promise of its unique source material.

The film opens in 2010 in Iraq, which is not really where you expect most horror films to begin. A trio of Marines descends into an underground cave. The lights cut out, we hear screams and then…the action jumps three years and shifts to the Bronx.

We meet Sgt. Ralph Sarchie (Eric Bana) as he oversees a particularly horrific crime scene involving a dead infant. Sarchie seems to have an innate knack for detecting unusual cases, which has earned him the nickname “Radar” from his adrenaline junkie partner (Joel McHale). The duo begins investigating a series of bizarre crimes that seem strangely linked to one another and may involve those Marines from the prologue. Eventually, Sarchie crosses paths with a deeply flawed priest named Mendoza (Edgar Ramirez), who helps him confront the proverbial demons in his past so he can figure out how to deal with the literal ones in the present.

“Any other stereotypes you want to hit while I’m here?”

Deliver Us From Evil is based on “Beware the Night,” the book written by Sarchie and Lisa Collier Cool. The movie is directed by Scott Derrickson, who made an impressive splash in this genre nine years ago with his directorial debut, The Exorcism of Emily Rose. That movie isn’t perfect, but it smartly retrofitted the demonic possession film as a courtroom drama, giving the genre a new spin and exploring the idea that there might be a scientific explanation for the allegedly supernatural events. In the “Making Of” featurette that comes with Deliver Us From Evil, super-producer Jerry Bruckheimer talked about his desire to make a movie that was “The Exorcist meets Serpico.” (Which, by the way, sounds exactly like the sort of thing a super-producer would say.) Once again, the idea is to present a familiar demonic possession story in a fresh way; this time, we’d see it play out through the lens of a cop drama.

Unfortunately, Deliver Us From Evil slants heavily toward the “Exorcist” side of the equation while largely ignoring the “Serpico” part that could’ve made it truly stand out. In fact, the only “Serpico” things about the film are that it’s set in New York and the lead character is based on a real-life cop. Derrickson, for example, could’ve filmed it as a gritty, realistic cop drama instead of relying on the overly familiar atmospheric presentation and jump scares he ultimately settled on. (Though, to be fair, the director is pretty good at setting a creepy stage, as he did with Sinister.)

The demonic presence in this film detests any sort of light source, which conveniently allows Derrickson to play in the dark. But instead of providing satisfying chills, the dark here is mostly dank and oppressively murky. The exception is a nifty early sequence set in the Bronx Zoo. The extended, climactic exorcism features some solid visual/sound effects — and an impressive physical performance from actor Sean Harris — but is undercut by some rote beats (which are presented in stages like “Pretense”, “Breakpoint”, and “Expulsion”), not to mention the absurdity of staging an exorcism in a police interrogation room.

Sarchie learns he possesses what is called a “Discernment of Spirits,” which makes him sensitive to malevolent forces and puts his strained family life — the cop has an adorable moppet for a daughter and a wife played by Olivia Munn — in jeopardy. It also allows the film to be overloaded with tell-tale signs of bad news. Some of them (hyperactive cats, foreboding Latin texts) are cliches any casual horror fan will immediately recognize, and have the unfortunate effect of making Sarchie seem a little slow on the uptake. Others — like the prominent role played by the songs and lyrics of The Doors — are more creative, if still a little head-scratching. There’s a vague link to the portals/doorways demons require to enter our world, but it still feels forced.

Bana adopts a Bronx accent, but — as with most of his American roles following his breakout in Chopper — the Australian actor brings little of the charisma that first got everyone’s attention. Bana still has a good presence on-screen; he’s better when he’s exploring Sarchie’s conflicted feelings about religion and a violent misdeed from his past than when he is asked to drive the story. Ramirez makes Mendoza feel recognizably human, despite the fact that the script (written by Derrickson and Paul Harris Boardman) really strains to make the character an “unconventional priest.” (He drinks…he’s a recovering drug addict…he checks out women!) I also like that Derrickson cast a pair of actors in key roles who you wouldn’t necessarily expect to see in a dark horror film. McHale (Community) is his smart-alecky self, but also looks totally credible during a hallway knife fight. He fares better than Munn (The Newsroom), whose character does little besides fret about her increasingly distant husband.

Deliver Us From Evil had the chance to put a new spin on a crowded genre. But instead of turning heads in an exciting way, the film wallows in too many of the same cliches.