Posted in: No Huddle by Jeremy Butler on November 5th, 2014 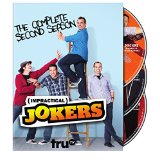 “WARNING: The following program contains scenes of graphic stupidity among four friends who compete to embarrass each other…”

They’re back!!! Tru TV’s smash hit Impractical Jokers is back with a season two that continues to show you that no one embarrasses you quite like your closest friends.  The gang is all back; Q, Murr, Joe, and Sal, as they take their pranks to the next level. The stakes are the same: one infiltrates a prospective business such as dental office, movie theater, etc. and must do whatever the others order to push them out of their comfort zone; failure to comply results being subject to the consequences at the end of the episode.

I’ve watched my fair share of hidden-camera shows, this one being rated near the top of the list. The element for this show’s success over many of the other shows that I’ve seen is attributed absolutely to the friendship between the co-stars.  As I had mentioned above, no one has the ability to embarrass you quite like your best friends. Why? Because as seen throughout the episodes, they are the ones who know exactly what buttons to push to achieve the maximum reaction from you.  This is best demonstrated when the jokers (those who are behind the scenes watching on camera with a microphone) come up with random and equally traumatizing things for you to say or do in front of the unsuspecting person standing in front of the victim (the one being subjected to the other’s antics). However, this is not a one-sided challenge, as the creators have maintained the perfect way to keep everything equal and fair. What makes things fair is that each of the four has to perform the same task, meaning each one must play victim, providing each of the four with the opportunity to earn a little payback or redeem themselves so that they aren’t the one suffering the consequences.

With spirited competition and the ever-looming threat of being the one to fall victim to the end-of-episode consequences, theses four hold their own and the attention of the audience as the show accomplishes the objective of all series: entertainment. However, I will caution that the show should be take in in small doses (or at least that’s what worked best for me), because even though the show is very enjoyable, we all know that even the best practical jokes get old after a while.  The show maintains the same format as last season, which is both a blessing and a curse. Given that there are no real changes, it will make it more difficult to attract a newer audience which will stick to their routine programming; but on the other hand, this also makes it easy for die-hard fans to fall right back into routine with the show as if no time has passed. For me, though, I like to mix it up; in this case, however, I must admit it is was nice to return to something familiar and entertaining.

Notable episodes would include Elephant in the Room, Birds and the Bees, Film Fail, and Not Safe Work. The reasoning that these episodes stood out over all the rest coincidently happens to be the same: the scenarios. The scenarios turn out to be the funniest aspect of the series. Take Elephant in the Room, where the group acted as dental assistants and the antics push the guys to their limit. Birds and the Bees forces the group to reveal dark secrets to complete strangers. Just the look on the people’s face during is enough to make you laugh out loud. However, you don’t have to take my word for it, see for yourself.

Jeremy Butler is a film school graduate of the International Academy of Design and Technology. He is been writing for Upcomingdiscs since 2012; however, movies have played a big part of his life for much longer. Favorite genres include horror, science fiction/fantasy, and comedy. Favorite movies are V for Vendetta, Boondocks Saints, Kiss Kiss Bang Bang, and The Godfather.
Maleficent (Blu-ray) Life of Crime (Blu-ray)