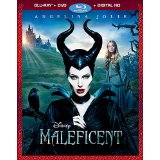 “Let us tell an old story anew, and we will see how well you know it.”

If Christopher Nolan’s take on The Joker isn’t the very best example of modern cinematic villainy, then it’s near the top of the list. Obviously, a tremendous amount of credit goes to Heath Ledger’s Oscar-winning performance in The Dark Knight, but I’d argue the real thrill comes from the character’s arbitrary, inexplicable approach to evil. By having its Joker invent tragic (fake) backstories on the spot, the film made a mockery out of the notion of having to explain a movie monster’s past. Disney’s Maleficent, on the other hand, is the latest misguided attempt to redeem a character who was better off being unredeemable.

I still remember seeing 1959’s Sleeping Beauty on home video when I was very little. I’ve since re-watched the movie as an adult, but as a kid I honestly didn’t retain too much about the film beyond the basics: a princess falls into an eternal slumber after pricking her finger and is awakened by true love’s kiss. The one thing I remembered very clearly is how terrified I was of its villain.

Maleficent shows us how she came to place the deadly curse on Princess Aurora. The film opens with an extended prologue that establishes two separate and distinct worlds: there’s the human kingdom that is ruled by greed and malice, and the idyllic moors governed by fairies and other magical creatures. We first encounter Maleficent as a young fairy girl. She meets and falls in love with a human boy named Stefan, who vows to become king one day. The humans eventually wage war on their peaceful neighbors, and the ambitious Stefan (Sharlto Copley) makes a decision that ensures his seat on the throne but shatters his relationship with Maleficent (Angelina Jolie).

The movie’s most thrilling scene — the classic moment where Maleficent places the curse on infant Aurora — is also a perfect example of why this movie is so frustrating. On the plus column, Jolie effortlessly commands the (green)screen during the one sequence where Maleficent is deliciously and unrepentantly nasty. It’s no coincidence these are the five most fun minutes in Maleficent. The downside is the film completely misunderstands what made the character compelling. Here, Maleficent is reductively re-cast as a woman scorned; personally, I found her a lot more frightening and interesting when she was handing out death curses simply because nobody bothered to invite her to a party.

“So you see, this story is not quite the one you were told.”

The radical alteration extends to the rest of Maleficent. The film borrows elements from both the Disney animated film and, naturally, the original fairy tale. However, Maleficent most closely resembles Wicked, another revisionist tale that sought to rehabilitate the reputation of a green-skinned baddie. But whereas Gregory Maguire’s book — and, to a lesser extent, the wildly successful musical adaptation — sought to re-imagine every brick of L. Frank Baum’s Oz, Maleficent feels blandly superficial.

The film’s focus is strictly on eye candy. Maleficent is the directorial debut of Academy Award-winning production designer Robert Stromberg, who won Oscars for his work on Avatar and Alice in Wonderland. His visual bona fides are on display immediately — especially if you catch Maleficent in IMAX 3D — as the title character soars through the enchanted moors. The director also conjures up a literal army of magical creatures, but none of them leave much of an impression. Stromberg has worked with the likes of James Cameron and Tim Burton, but is incapable of imprinting nearly as much personality on his CGI creations.

Stromberg fared better in transforming Maleficent’s crow sidekick into a loyal, shapeshifting servant (Sam Riley), even if the banter between the duo feels a bit forced. Speaking of forced, I’m not really sure why the director hired three good actresses — Imelda Staunton, Lesley Manville and Juno Temple — to play three characters as irritating as the clueless fairies who become Aurora’s guardians as she grows into a young princess. When they’re in fairy form, their squeaky voices and oddly-proportioned heads make them unpleasant to look at or listen to; in human form, they inevitably devolve into dumb slapstick. Either way, it was painful to watch. All the digital wizardry that went into creating such annoying characters is especially galling when you consider that the majority of Stromberg’s most interesting visuals come from the striking ways he chooses to frame his star.

Not surprisingly, the movie’s most effective special effect is Jolie. You may not have noticed this since the uber-famous actress is rarely out of the public eye, but Maleficent is Jolie’s first live-action film in four years. The actress remains as magnetic as ever, especially when she’s much better than the movie she’s starring in. As Maleficent, her cheeks have been accentuated to the point that they look sharp enough to cut her adversaries (a nod to her animated forebear). But despite Jolie’s creepy appearance and the eerie trailers, the film seems to have been heavily influenced by its star/producer’s standing as the world’s most famous superstar mom. (Jolie has probably adopted another kid by the time you finish reading this sentence.)

This is most evident in the surprising connection between Maleficent and Aurora (Elle Fanning). While I’m enjoying Disney’s recent willingness to subvert the “true love’s first kiss” propaganda image it helped popularize in the first place, I wish the movie had more fully committed to its beautiful, dark, twisted fairy tale potential. I might feel differently if Fanning had gotten something to play beyond naïve, wide-eyed wonder opposite Jolie. Copley — who we first watched become gloriously unhinged in District 9 — fares a bit better, but he never feels like a serious (love or adversarial) match for Jolie.

Maleficent is presented in its original aspect ratio of 2.40:1. The 1080p image is arrived at with an AVC MPEG-4 codec at an average 35 mbps. This high-definition image presentation delivers exactly what you expect from Disney Studios. The image is razor-sharp with flawless transition between the computer-created images and the live action work. The level of detail here allows you to take in the crowded fantasy world and appreciate the great attention found in the small details. It’s a film made rewatchable because there’s always something new to discover in those details. Black levels are absolutely delightful. Good thing, because the character sports a rather dark outfit in the pivitol scenes. You get wonderful shadow definition and detail even in darkness. Colors are bright when appropriate. Character close-ups offer the most stunning detail. This is particularly true of Maleficent herself.

The DTS-HD Master Audio 7.1 is often quite aggressive with rich surrounds that totally immerse you in these fantastic environments. The soaring James Newton Howard score swirls and revels with the action on the screen. Dialog is always clear and perfectly placed. The subs come alive at the appropriate times. The confrontation in the castle is particularly alive with surrounds and sub to move you along with the images. It’s about as near-perfect an audio presentation as you can find.

The extras are all rather short and promotional in nature. You don’t get the usual deep look into the material as you get with the older classic releases.

Aurora – Becoming Beauty: (4:52) Elle Fanning gushes about the part and the people she worked with. Cast and crew share the love-fest in this profile of the actor/character.

From Fairy Tale To Feature Film: (8:13) There’s some good behind-the-scenes footage here. Cast and crew talk about the evolution of the story to this particular version of events. There’s plenty of comparison footage to the Sleeping Beauty footage. There’s some behind-the-scenes footage that shows Brad Pitt on set with their kids, one of whom played the younger Aurora because other kid actors that age were too scared of Jolie in character.

Building An Epic: (5:47) Plenty of behind the scenes footage of the battle between the King and the fantasy characters. You see a ton of blue and green screen along with Jolie in harness for the flying scenes.

Classic Couture: (1:34) Designing an building the headpiece for Maleficent. It’s really just narration over shots of the piece itself.

Maleficent Revealed: (4:45) More f/x footage from various scenes. You get to see various stages of completion.

Deleted Scenes: (6:41) There are five with a play-all option

It’s fitting, because everything about Maleficent — a lavish production with all the resources in the world — is no match for the power of its star. With a reported $180 million budget, the film is an expensive reminder that Darth Vader became 80 percent less scary after we found out he used to look like this and this maybe some bad guys should stay that way.